The Cathedral Church of Christ, Blessed Mary the Virgin and St Cuthbert of Durham 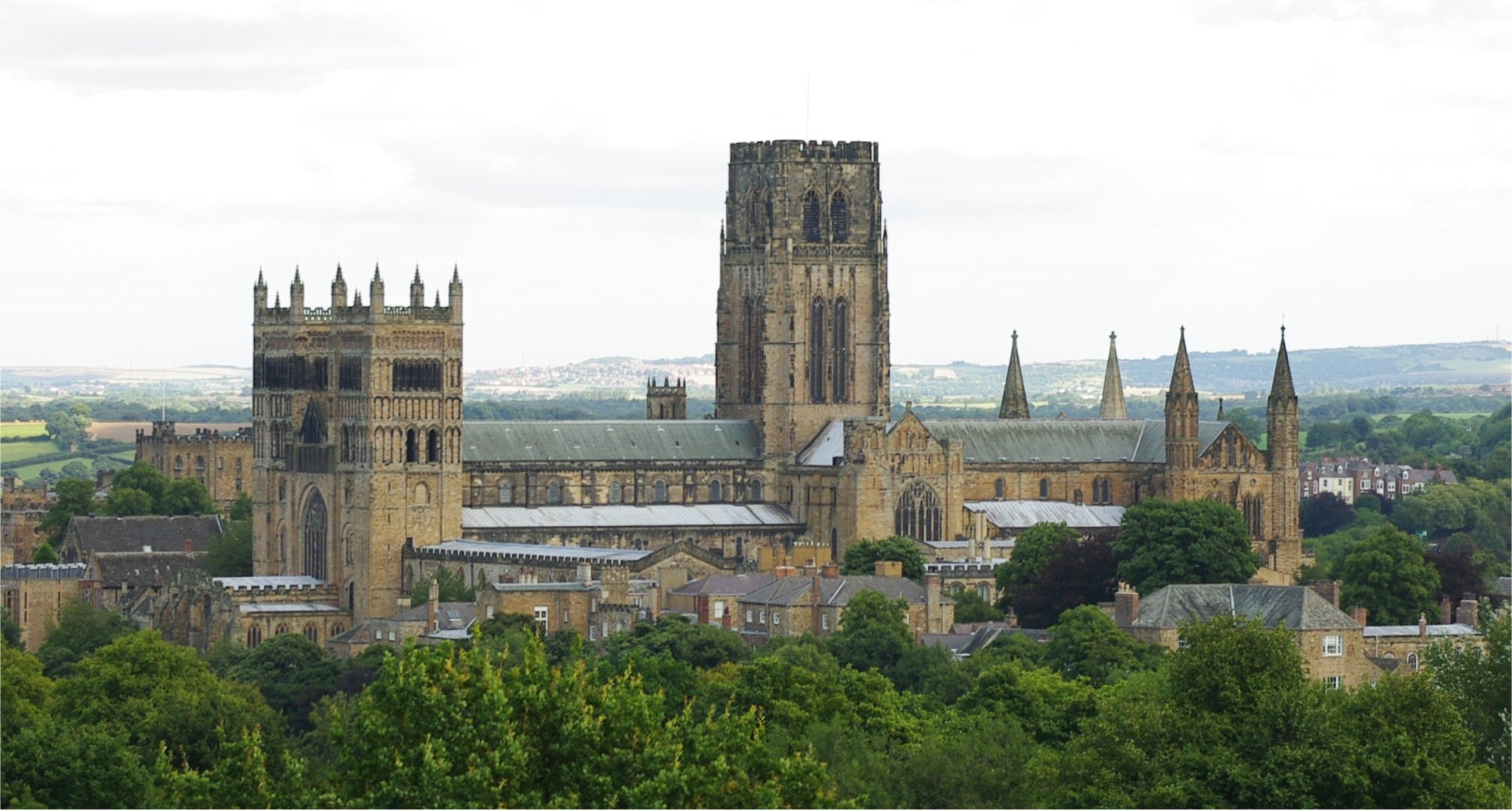 Durham Cathedral: a place of peace with a political past.

‘Grey towers of Durham, yet well I love thy mixed and massive piles,
Half church of God half castle against the Scot,
And long to roam these venerable aisles,
With records stored of deeds long since forgot’

While to the modern observer Durham Cathedral may look like a conventional, if beautiful, Medieval Cathedral, the history of the establishment and role of this building is an impressive and unique story. Indeed, despite its age the current cathedral is in fact the third of a series of Churches built on the site, all of which were begun within the space of a century. The first two Churches were both called the ‘White Church’, the former built of wood, then its replacement out of stone in 1017, whilst Durham developed around these sites. The cathedral which we see today was begun on 11th April 1093 after the original ‘White Church’ was demolished to make room for the new cathedral. Its completion in 1135 did not, however, mean it was complete as seen today: looking into the cathedral, it is clear the style of architecture constantly changes. From the Norman style quire, nave and transepts, through to the Late Norman Gothic style, the changing art styles of the Middle Ages are clearly visible in a single building. The cathedral was also constantly adapting to the needs of the local community. The Chapel of the Nine Altars was added in the 13th Century for communion to take place, and a separate Chapel for women was constructed, in order to cater for the increasing number of women who wanted to take part in services, but couldn’t within a monastic building. However, despite these numerous additions and changes, the building has remained true to its original Norman design, which can be clearly seen in the modern cathedral’s cruciform shape.

However, what is perhaps more interesting than the design of the Cathedral was the reasons why it was designed in such a way. Under the command of William the Conqueror and Anselm of Canterbury, William of St Calais – a Norman – was appointed Bishop, and the building of the Cathedral was commissioned. As noted by John le Patourel, Churches built by the Normans in England were designed to impress upon the local populace imperial power. For the first decade of Norman rule, revolts and challenges to the King made this display of power even more important. William responded to the violence with the so called ‘Harrying of the North’, a series of campaigns to subjugate the local population, but this was only a temporary measure. A more permanent solution was to create buildings in order to ensure Norman control in the North was consolidated, and highly visible, and the cathedral fulfilled this role. Notably, even the architecture was an expression of the new Norman rule; the unique vaunted arches reminded those who entered the cathedral that this was a continental building. In addition, the location of the cathedral was highly defensible, as being at the top of the hill it was very difficult to attack, making it a practical and symbolic construction. However, this power soon moved beyond purely royal control.Durham Cathedral essentially acted as the major bastion against the threat of Scotland during the High and Later Middle Ages, when war meant the cathedral was used as a refectory by soldiers. However, it was necessary to appoint a royal official to ensure the defence and government of the region: this official was the Prince Bishop of Durham, who held one of the wealthiest British dioceses, and was expected to defend his domains. The bishops had an almost royal status; and their control over Northumbria was shown through the form of Durham Castle. However in 1311 a growing independence from the Crown became expressed when the Prince Bishop Antony Eck converted the nearby Auckland House into a castle where the seat of the Bishops was re-established. That Durham is not mentioned in the Domesday Book highlights its political independence, centred round the cathedral and its bishop. Even looking around Palace Green, you can see statements of the power of the Bishop of Durham. On the various buildings, the crest of the bishop who commissioned it can be seen, showing the secular power the bishops possessed through patronage, but also the ideological power of heraldry. These buildings also demonstrate the welfare role in the local community played by the Bishop, as many were built for the provision of alms to the poor. It was not until 1836 that the title and power was permanently removed from the Bishops.

Due to all this, Durham Cathedral was the centre of a very provincial power base which was consolidated by the presence of courts, offices and exchequers which were built up around it by the twelfth century. It even became a centre of learning, with a vast archive, and sent a number of students to Durham College, Oxford (now Trinity College).

It is important to also bear in mind that the power of religious buildings in the Middle Ages did not derive entirely from the structure itself, or even the people who controlled it, but also the religious icons it contained. While Durham, like all medieval cathedrals, possessed a large variety of relics including hair of St Bernard of Clairvaux, the beard of St Godric of Finchale and the comb of St. Malachus, it was the tomb for St Cuthbert, the famous patron saint of northern England, that the cathedral was known for. St Cuthbert’s relics did not begin their afterlife in Durham, having been originally located at Lindisfarne, where he had been bishop. However, due to the attacks of Viking raiders upon coastal monasteries in the 9th Century, and specifically in reaction to a raid of 875 AD, the monks of Lindisfarne moved the relics of the saint, although it was not until 995 AD that the monks finally settled in Durham and built the first ‘White Church’, choosing it as a centre to the cult that built up around him.With the Norman Conquest in 1066, there was a need to re-appropriate the saint in order to prevent him from becoming a figure of opposition to the new regime. In response, the building of a new cathedral dedicated to him, and the translation of the relics in 1104 which proved that his body remained uncorrupted, was a way of the Normans expressing, while also appropriating, St Cuthbert’s power. Custodianship of the relics was even taken over by Benedictine monks introduced from the continent by the Normans, highlighting the desire to gain control of this Northern symbol. That Henry VIII found it necessary to destroy the shrine to St Cuthbert in 1538 only further draws attention to the power that the body of the saint possessed to the faithful. Indeed, the presence of St Cuthbert made Durham Cathedral a European pilgrimage site of great importance, and thus possessed great religious authority. Nowhere is the building’s power as a holy place exemplified more than in the practice of ‘sanctuary’, the medieval practise of providing 37 days of protection for those fleeing from the law within cathedral walls. Fines and various punishments could be levied against those who breached sanctuary. This mixture of Anglo-Saxon tradition and Norman law exemplifies how Durham Cathedral became a bridge between the two traditions. The Sanctuary Knocker, still stored within the cathedral, is a reminder of the power that the saint and the monastic community of Durham once possessed.

In these ways, Durham Cathedral provided a cohesive symbol in the North, both of the Norman Conquest, but also the power of the bishop and his saint. Indeed, the cathedral must be seen, as Scott’s poem implies, not merely as a religious building, but a secular one as well. The cathedral helped shape the landscape, and the people who lived in it. Saints and cathedrals aided in the construction of strong local identities in an era long before national identities, and Durham Cathedral is a symbol of this important period in English history.