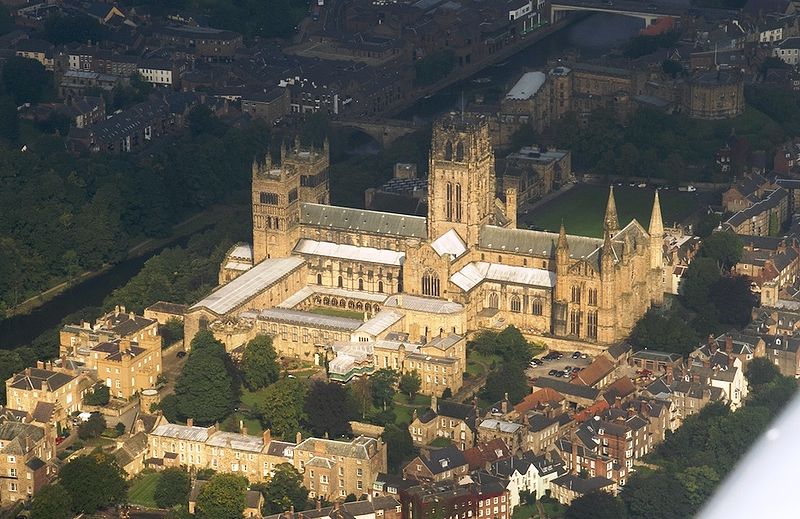 Whether returning to Durham as a wizened student for the fifth year running or setting foot on its cobbled streets for the very first time this October, take a moment to stop, look around and experience the historical richness of the city that surrounds you. We students have only been here since 1832 and the city vastly predates the bustle (and intellectual vitality) we contribute.

Today it is almost impossible to imagine the smooth grassy slope that predated the city centre; a carpet of green stretching from Market Square to the natural hill beyond which is embraced by the tight horse-shoe meander of the River Wear. The top of the hill still provides an unrivalled view of the surrounding countryside and this was the site chosen by the monks in the tenth century who are credited with the foundation of Durham City.

Fleeing Lindisfarne Island to escape Viking raids in AD 985, the group of monks entrusted with the body of St. Cuthbert (Bishop of Lindisfarne until his death in 687) spent ten years travelling around until they settled permanently. According to local legend the city was founded by divine intervention. The twelfth century chronicler Symeon of Durham writes that, after many years wandering in the north, St. Cuthbert’s bier halted at the hill of Warden Law and was impossible to move. After three days of fasting and prayers to St. Cuthbert, the saint appeared to the monk Eadmer and instructed him to take the coffin to Dun Holm. Although the bier could be moved after the revelation, the location of Dun Holm remained a mystery. Later that day, the monks met a milkmaid lamenting the loss of her dun cow, last seen at Dun Holm. Realising that this was a sign from the saint, the monks followed her to the woody hill inside the meander destined to be the final resting place of St. Cuthbert.

However, considering the geographical advantages of the site, it seems likely that the choice of this location was not without political motivation. The city’s name reveals its valuable attributes; formed from the Old English dun (meaning hill) and the Old Norse holmr (meaning island), Durham translates as hill on an island. Created by a tight gorge-like meander in the river Wear, the island is naturally fortified, which proved an invaluable asset in repelling subsequent attacks by the Scots in 1006 and 1038.

The original monks erected the foundations of Durham Cathedral (although these are no longer visible, having been supplanted by the Norman structure) and, largely owing to the “tourist” attraction of St. Cuthbert’s remains, the city expanded. Reputed during his lifetime for miraculous acts of healing, the remains of St. Cuthbert were also believed to have healing powers. When exhumed several years subsequent to his death, the body was discovered to be unaltered and thus a cult formed around the incorruptible saint. His remains (transported to Durham by the monks) attracted many visitors who came to show their devotion or in the hope of experiencing a miracle cure. The fervour to visit St. Cuthbert’s remains was so great that, in 1417, two women dressed themselves as men in order to gain admission. According to Benedictine rules women were not allowed to approach the shrine and thus, in punishment for their grave offence, both were arrested and paraded through the streets dressed in men’s clothes. Although tourists have no need to go to such passionate lengths to visit the attraction today, St. Cuthbert’s shrine continues to be a frequently-visited spot and tourism continues to play a significant role in the city’s economy.

Visiting St Cuthbert’s shrine ceased briefly from 1069–70 when the monks who maintained it fled in terror from William the Conqueror’s “harrying of the north”. The massacres of peasants and the destruction of their livestock and crops during this period was William the Conqueror’s response to the rebellion which spread through the North East following the Normans’ initial unsuccessful attempt to take control of the area from the native Saxons. The original castle was constructed by the Normans to keep the local inhabitants in order.

Since 1133 however, the threatening presence of the castle has been overshadowed by a far more intimidating building. The imposing Norman cathedral can be seen from almost every point in the city as though it, rather than the castle, stands guard. When Sir Walter Scott saw the cathedral from South Street, its menace and magnificence inspired him to write “Harold the Dauntless”; a poem set in County Durham about the Saxons and Vikings. The following lines from the poem are carved into a stone on Prebends Bridge:

Grey towers of Durham
Yet well I love thy mixed and massive piles
Half church of God, half castle ’gainst the Scot
And long to roam those venerable aisles
With records stored of deeds long since forgot.

The cathedral does not fail to impress; Symeon of Durham declared it to be the “English Zion” whilst the listeners of Radio 4’s Today programme voted it their favourite building in 2002.

Looking down on Durham from the vantage point of the cathedral’s highest tower, the idyllic view across the city towards the green fields beyond – largely undisturbed by the ravages of industrialisation – exudes the impression of uninterrupted tranquillity. However, had eighteenth century ambitions been realised, the view below would have been quite different.

Unimaginable as it may seem now, in 1720, it was proposed that Durham could become a sea port simply by excavating a channel north to join the River Team, a tributary of the River Tyne near Gateshead. This would have merged the Tyne and Wear rivers and the resultant erosion would have had a huge impact on the landscape. Although this plan never came to fruition, the idea remained in the thoughts of Durham businessmen and thirty-nine years later a proposal was put forward to make the Wear navigable from Durham to Sunderland by changing the course of the river. The lazy tree-lined meander of the Wear, now frequented by no vessel larger than the Prince Bishop, makes it difficult to imagine the activity and bustle of a port in its stead. However, the plans were once again abandoned as impractical owing to the increasing size of ships and the growth of Newcastle upon Tyne as the North East’s dominant port. Nowadays all that remains of Durham’s maritime dreams is the statue of Neptune, the God of the Sea, in Market Square.

Dismissed as a potential seaport, Durham was overshadowed once again by Newcastle during the Industrial Revolution. Although the region surrounding Durham became a major source of coal, with hundreds of mines (and almost as many mining disasters), the heavy industry of the larger city never reached Durham. However, the Industrial Revolution did leave its mark in Durham, as the continuing popularity of the annual Miners’ Gala, begun in 1869, proves. More unusual industrial activity occurred in the city in the form of organ making and carpet making. The cathedral organ today testifies to the skill of Durham organ makers Harrison and Harrison who rebuilt it in 1905 and have maintained it ever since, enabling the instrument to continue to be fit for service in its third century.

On a more dramatic note, the prison whose barbed-wire topped walls cast a shadow over tree-lined residential streets was built in 1820 although, ironically, it wasn’t until 1836 that Durham’s first police force was established. The final execution at the prison’s gallows occurred in 1958 and, following the removal of the high-security wing, the prison has been downgraded to house exclusively male occupants today. Famous prisoners include John Thomas Straffen, a serial killer and the longest-serving prisoner in British legal history (55 years in jail) and John McVicar, declared “public enemy number one” by Scotland Yard in the 1960s for his armed robberies. He wrote his acclaimed autobiography McVicar By Himself whilst in jail. Most recently, Raoul Moat’s release from the prison immediately preceded his shootings and suicide in Newcastle earlier this year.

It is perhaps a discomforting fact that Durham’s status as a place of imprisonment predates its status as a seat of learning sanctioned by university status. Although a college existed in Durham in the seventeenth century, claims that it predates Oxford and Cambridge as a university are attractive but unfounded. Denied the privilege of granting degrees by the aforementioned universities who opposed the creation of a rival, the project of establishing a university at Durham died with the termination of Richard Cromwell’s Protectorate. It was not until 1832 that Durham finally achieved its status as Britain’s third-oldest university. The efforts of William van Mildert, the last Prince Bishop of Durham, and the religious community succeeded in passing through Parliament “an Act to enable the Dean and Chapter of Durham to appropriate part of the property of their church to the establishment of a University in connection therewith”. It was with this rather-wordy statement that Durham University was founded.

It seems that Durham has always been considered a place of importance. Singled out by the monks as the final resting place for the sacred remains of St. Cuthbert, its continuing significance is demonstrated by the ambitious eighteenth century plans to transform it into a sea port and more recently by the designation of the entirety of central Durham as a conservation area in 1968. And of course Durham – both the city and the university – has been singled out by generations of students as a place to study. Yet it is not only the university that educates in this town; there is much that can be learnt from the history of the city that encompasses it (of which this article barely scratches the surface). Bill Bryson, our chancellor, sums up the value of the city today: “Durham, I think, as anybody who has ever stepped out of the railway station and looked across the valley will appreciate, is one of the most beautiful cities in the world.” It has “a huge amount of history, a huge amount of beauty and a great deal of friendliness.”