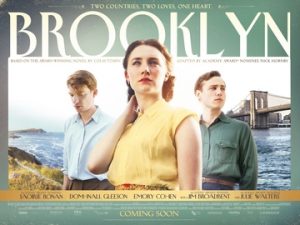 A poster for the recent film adaptation of Brooklyn.

Colm Toíbín’s novel, Brooklyn, has a simple premise: young Ellis (pronounced AY-lish) Lacey travels to bustling 1950s New York from her native Ireland in search of better opportunities. Along the way she must deal with the heartbreak and difficulties of being an ocean away from home. Yet, there are many modern parallels to be seen between her story and our modern-day concerns; the topics of migration (hotly debated in the US presidential election), identity among strangers (in a world that is increasing more well-connected and yet more lonely) and what home even means (not too far from the hearts of my fellow students, I’m sure). Ellis’s story documents an era in American history when the influx of job-seeking migrants shaped a new demographic and helped New York become the melting pot of cultures it is today.

The United States is a nation built on immigration. From its very foundation, it has been characterized by great influxes of people and their distinctive contributions to society. Ellis’s migration was a small part of the massive postwar prosperity the USA, and especially New York, were feeling. We can only imagine the energy of the city; the building boom in Manhattan saw modern towers of glass and steel rising to replace shorter, wider pre-war buildings. New York City also became the world centre for modern art (taking the title from Paris), was made the home of the United Nations and was the most populous city in America. It was also modernising its transport and communication systems to better facilitate its growing population and was a giant in American culture. Decca, Columbia and RCA music records had their headquarters there, while shows like I Love Lucy and films such as How to Marry a Millionaire and Sabrina cemented fashion tastes and emphasized the dazzle of the city. New York was the place to be in the 1950s. Although Ellis did not live this high life, her simple existence was still starkly different to what she had at home. When we meet her at the beginning of the novel, Ellis is working minor, uninteresting jobs in Enniscorthy, with no ambition to move to the USA. However, when presented with the opportunity, she is tantalised by what the city could offer. Merely emigrating for work, she was unaware of New York’s cultural and social reputation, but as she matured in her new environment, she began to sense the excitement of it all.

However, beneath all the glitz and modernity, a darker side of New York existed too. During this era, the city actually saw a decline in population as racially homogenous suburbs were built up around it, mainly for people of white European descent, while Caribbean, black and Latino citizens tended to stay in their own quarters within the city. 1950s America was a far more segregated society than today, and the decade saw the birth of the Civil Rights Movement, starting with non-violent protests and boycotts. There was also a rise in teenage gang warfare in the city, while manufacturing took a downturn as factories moved to New Jersey. This meant the loss of the major New York ports, although the dock areas remained packed with restaurants and services that had supported the ships and ferries, creating a sleazy underworld. Though Ellis’s story doesn’t cover much of this, the issue of race is apparent in her fascination when the department store she works in begins to sell stockings for black women. She observes the inherent racism of society as customers venture in to buy them. 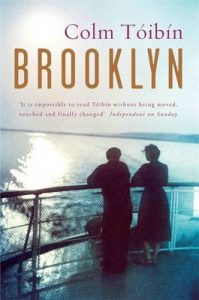 Irish immigrants have always constituted a large part of New York’s population, from the first major wave of hopefuls driven from their homeland during the potato famine in the 1840s and 50s. These people brought their culture and history with them, and more importantly, they sealed the idea of America as a land of opportunity for their family and friends back home. Ireland remained little changed after WWII – since it had emerged relatively undamaged it was not included in any postwar prosperity plans. Consequently, Ireland was an outcast from the optimism and industrial boom that the rest of Europe and America enjoyed. It is in this context that the post-war wave of Irish immigrants crossed the Atlantic. The majority were just like Ellis – young, unmarried women who, through connections with the Catholic Church, had secured jobs in department stores, supermarkets, companies and so on. However, life wasn’t always good for immigrants since the city suffered major overcrowding – one bedroom houses were often shared between families. Ellis didn’t live in such terrible conditions, but did live in a boarding house under the strict control of Mrs Kehoe, with little privacy from the other women living there. Luckily she finds herself in the company of good people in New York, though other immigrants may have been caught with tricky employers. The people Ellis meets are also reflective of the melting-pot nature of New York society at the time; her relationship with Italian-born Tony wasn’t at all unusual, since Italians were another major immigrant population. The fact that they met at a parish dance was also accurate, since these events were commonly organised by local priests as a way for men and women to meet in a controlled environment. The lack of black characters in the book shows the lack of ethnic mixing at the time.

Apart from the historical nature of the novel, there is also a human aspect; Ellis deals with homesickness, trouble and hard work in her new life, leading her to wonder where her ‘home’ actually is. Was it in Ireland, or was that a home that used to be, and one that she could never go back to? Was it there in New York City, with Tony and the life she had made herself? These are questions we can ask ourselves as students, displaced from the places we call home, as was discussed in Emily Wootton’s article. The feeling of being at home can be eventually replicated, surely, as we see with Ellis who comes to enjoy her new world. But what about the emotional attachment to home? We are fortunate to live in a world where we can send messages and video call our friends and family, whereas Ellis could only write letters, and call in emergencies. Such difficult communication would have made the move all the more painful, exacerbated by the week-long journey in cramped conditions.

Brooklyn evokes timeless ideas which modern readers can easily relate to, while providing a fascinating insight into a vibrant but little-known period of history. As well as the book, the recent film adaptation received great reviews from critics and the public alike. I’d thoroughly recommend giving both the book and the film a try!