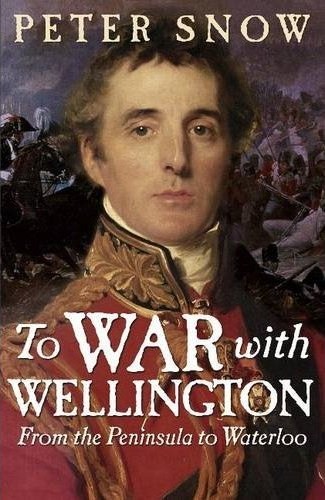 It’s not difficult to spot Peter Snow in a crowd. Standing head and shoulders above most, he must be one of the few people who can still look formidable in the huge, cavernous space of Durham Cathedral. On the evening of Monday 18th October he came to talk about his new book, , an engrossing account of the Peninsula War (1808–14) and its final culmination in the Battle of Waterloo. Snow took his audience through a fast-paced account of this important campaign, beginning in Portugal with a string of small-scale battles against rather incompetent French generals, onto the more taxing battles of Talavera and Albuera, to his final confrontation with Joseph Bonaparte in 1813, which forced him to abdicate as King of Spain. (His brother Napoleon followed suit not long after, following a disastrous campaign against Russia.) This brisk but fascinating narrative was peppered with insights into life on campaign (pretty rough and unsanitary by the sound of things), the primitive treatments for wounded soldiers (almost always amputation), and the sometimes barbaric actions of Wellington’s men (although it did sound like they knew how to have a good time off-duty). Maverick personalities also cropped up with Picton, Ponsonby, and Irish rifleman Ned Costello being just a few of the “hundreds” to be found within the pages of Snow’s book. Of course, no talk about Wellington would be complete without a blow-by-blow analysis of the Battle of Waterloo, which Snow delivered lucidly, emphasizing Napoleon’s recklessness and Wellington’s good fortune (in the timely arrival of Blücher’s Prussian forces) as essential to the victory.

After the talk, I had the rare opportunity to interview Snow about writing history from a journalistic background, Wellington the man, and the mysterious appeal of Napoleon Bonaparte. Here’s what he had to say…

With To War with Wellington, you have entered the territory of “professional” academic historians. Were you worried about criticism?

Yes, of course I was worried about criticism, but not necessarily from academics. You see, I’m writing a completely different kind of history to what they do. I read an awful lot of books in preparation for mine and I found that a lot of them go into very detailed analysis: lots of statistics and tables and things that most readers wouldn’t be interested in. What I was trying to do was to tell a story – a fascinating story – of a commander and his band of men. I said in my talk that I’m not a “serious” historian, but I hope that doesn’t mean I’m a joke historian either! I’ve been writing history for the past ten years or so. I wrote two books with my son Dan who is a proper historian so I know what that requires: a lot of rigorous research. But I’m a journalist by trade, and so naturally I gravitate towards storytelling and focus on the human aspect.

So you think there’s a place for history books aimed at the educated lay reader?

Oh yes, absolutely, that’s exactly what I want to do. The average person doesn’t want to pick up one of these dry tomes and read a lot of dense detail about military formations. I mean, you’ve got to get your facts right and you’ve got to be sure about your sources. But people want to hear stories, they want to be captivated and excited by something that truly was exciting. So what I’ve tried to do is relate that story as truthfully as possible in a way that’s accessible.

And do you think your experience as a journalist helped? I noticed how at some points in the narrative you slip into the present tense.

Yes, I do at some points, although I try to avoid it. It’s an old habit I can’t quite shake. When I’m describing a battle, an important tactical decision or something like that I can get quite excited: it feels like I’m right there, in the moment, and so I start describing it as if it’s actually happening. But in the main I think it’s best to write history in the past tense. You gain a little more perspective that way.

Wellington was undoubtedly a military genius, but he also had character flaws: his aloofness and short temper being just two. Do you think his brilliance came because of, or despite those shortcomings?

I’m going to have to say because of those flaws. I don’t think Wellington was ever really loved by his men in the same way Napoleon was. He wasn’t a particularly likeable character. He lacked a basic sentimentality which I suppose wasn’t a bad thing considering his profession. He couldn’t afford to be sentimental. He saw his men as a commodity to be used and spent – not as human beings. There’s a direct quote in my book somewhere [at this point, Snow picks up my copy of To War With Wellington and begins to flick through it]. Ah yes, here we are. “Wellington saw a British infantryman enter the park. He pointed at the man and said to Creevey,” he was talking to Sir Thomas Creevey, and said, “There: it all depends upon that article whether we do the business or not. Give me enough of it, and I am sure.” So there he is describing his chaps as sort of, pawns really – articles. He wasn’t passionately loved by his men at all. He was feared by them and respected but he disciplined and drilled them and they followed him and trusted him and they won battles. He never lost a battle.

Without the great defeat of Napoleon at Waterloo, do you think Wellington would be as renowned a figure as he is today?

He would have been distinguished for greatly enlarging the British Empire in India, which I didn’t make much of in my book. I was interested really in the story of his men, the band of brothers. But no, he would have won great distinction for his efforts in the Peninsula, fighting for the allies in Europe against Napoleon, for the Prussians and Russians and Austrians in the East. So he would have been a famous general. If it wasn’t for Waterloo he wouldn’t have been quite so renowned, but he would certainly have been remembered.

It capped off his military career…

Of course, it was his crowning moment you could say. It was that which made him one of the greatest generals of all time, whereas otherwise he would have been only a great general.

OK, final question: what’s next in the pipeline for Peter Snow?

I’m not quite sure. I’m thinking of the First World War, which I find very compelling but deeply depressing, what with the trench warfare and men getting mown down in huge numbers. But then I do accept that it’s terribly important. Or, possibly something more contemporary, the fighting in America perhaps, I don’t know. But maybe more detail on Waterloo? I’m not quite sure. I might have a bit of a rest first!

Thank you very much Peter Snow.

Thank you, it’s been a pleasure.

As it transpired, Snow had decided to skip his restaurant dinner in order to do this interview (and he admitted, because he wanted to watch Newsnight). Before he left, he told me about his second son, Shane, who studied at University College some years ago. Snow’s frequent visits were what kindled his love of Durham and of its cathedral. “But I’d never seen the library before tonight,” he said, “really wonderful space.” (He was speaking of the cathedral library, not the main library, you won’t be surprised to hear.) By this point, Snow’s PR was attempting to drag him back to his hotel, yet still he persisted with questions. He wanted to know what kind of history I was studying. I told him French, Napoleonic. “Ah, le Code Civil and all that? You know, I’ve never figured it out, after all these years. What made that little despot so attractive? I mean, they loved him, absolutely loved him!” I shook my head, “I’ve no idea. One of the great mysteries of life.”

“Quite so,” Snow said, happy that I’d agreed. “Quite so indeed.”