Opening the Vichy archives: another opportunity for France to confront its dark past 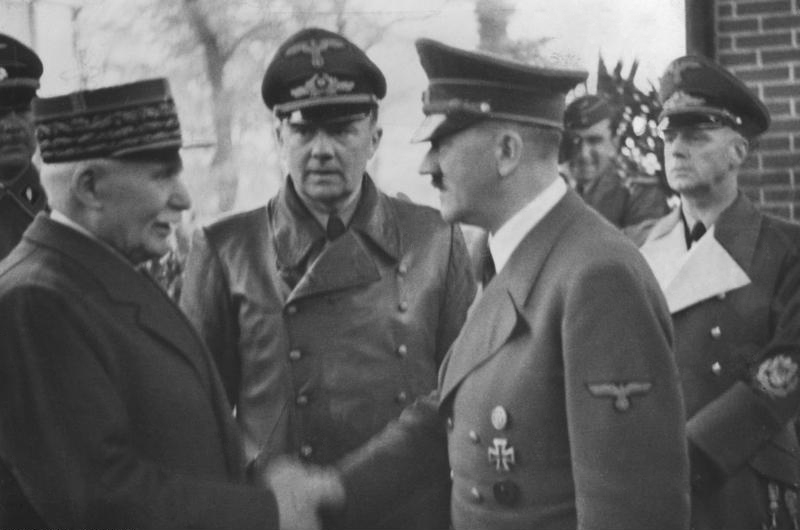 Marshall Pétain, the leader of Vichy France, shakes hands with Adolf Hitler, an image which has come to symbolise France’s collaboration with the Nazis.

At the end of December 2015, the French government opened formerly classified archives from the Vichy regime to the public, forcing the French nation to confront its collaborationist past. The archives reveal details of the period between 1940 and 1944 when Marshall Philippe Pétain and his regime in the town of Vichy actively collaborated with the Nazis in the extermination of Jews and other ‘undesirables’. The French police assisted in the deportation of 76,000 Jews to Nazi extermination camps. The newly opened archives reveal documents from Vichy government departments such as foreign affairs, justice and the police. Most significantly, perhaps, some of the documents detail the activities of the Special Brigades whose job it was to apprehend the ‘enemy within’ such as communists and resistance fighters. It is now possible to read reports of police tailing suspects, records of interrogations and letters of denunciation. Such documents will prove difficult reading for some, according to historian Jean-Marc Bélière. “I’ve seen people leaving the archives in tears,” he told Le Figaro newspaper in 2010. “Because they’d found out the details of an arrest, an execution, a betrayal, for example. Some came with the idea that their grandfather had been in the resistance but discovered that was not exactly true.”

Since the War, the French nation has struggled to come to terms with the part it played in the Holocaust. It was not until 1995 that President Jacques Chirac officially recognised the role of the French state in the deportations, especially acknowledging that during the Vel’ d’Hiv’ roundup it was the French authorities, rather than the Germans, who decided to deport children along with their parents. Until this point, the official line had been that the Vichy regime was an illegal government not representing the French Republic, established by traitors under foreign influence. The French positioned themselves, in their own minds, as having been an anti-Nazi nation, a nation of resistance fighters. This was an understanding of the War which permeated deeply through society, in history textbooks and in literature, in museums and in television series.

Internal and external pressure has gradually unpicked this deeply ingrained myth. As historians have become more and more interested in French involvement in the Holocaust and the French public has become increasingly aware of it, initiatives have sprung up across the country to encourage critical evaluation of this difficult period in France’s history. One of the first exhibitions to focus solely on French engagement with the Nazis, entitled La Collaboration 1940–1945, was held at the National Archives in Paris in 2014. Moreover, a decades-long campaign to transform the only intact Nazi internment camp in France into a museum finally succeeded in 2012 when the Site-Mémorial du Camp des Milles was opened near Aix-en-Provence. The museum is interactive, encouraging not only the learning of facts but also personal reflection on the prevention of genocide. The movement extends beyond museums though – much is being done to encourage popular cultural engagement with France’s dark past. Alongside numerous French feature films tackling the subject of collaboration, a hugely popular television drama series stands out. Now in its sixth season, Un Village Français has confronted the issue of French complicity in the Holocaust head-on, depicting the realities and complexities of collaboration and resistance in a fictional French village. Some of the most likeable characters collaborate while some of the bravest resistors are decidedly unpleasant. Meanwhile, new revelations come out all the time, constantly reminding the French public of their country’s inglorious history. In 2014, for example, a US campaign forced the state rail network, the SNCF, to pay compensation for having transported Jews.

Despite this progress, on the most personal level, when family members rather than institutions are implicated in Nazi crimes, many would prefer to live in ignorance. It is for this reason that Chirac’s words did not bring an end to the mindset of denial overnight and that, even now, many struggle to come to terms with French involvement in the Holocaust. While major museums have been equipped with state-of-the-art facilities and take a critical approach to France’s Second World War experience, smaller, provincial museums tend to remain stuck in the past. Many French towns have their own Musées de la Résistance which present their local history in an extremely positive light, emphasising resistance while skimming over collaboration. Such museums demonstrate the difficulties of trying to change a mentality on a national scale. Moreover, when I visited Camp des Milles, a flagship museum of the deportation, I found it to be practically deserted, almost entirely devoid of visitors. While it would be convenient to assume that the process of critically examining France’s collaborationist past is complete, there is clearly still room for further engagement and education across the country.

Amazingly, despite the deportation and murder of much of France’s Jewish community less than a century ago, France has the largest population of Jews in Europe and the third-largest in the world behind Israel and the United States. Yet the rise of anti-Semitism is a worrying trend in French society today. Although Jews make up less than 1% of the population, they are the target of 51% of all racist acts in France. From 2013 to 2014, the number of anti-Semitic incidents doubled, as did the number of Jews emigrating to Israel. Many synagogues, Jewish schools and community centres are now constantly protected by armed police.

At this time of heightened threat for the French Jewish community, it is more important than ever that the truth of French complicity in the Holocaust is remembered and taught. France has come a long way since the days when even its government refused to admit its role in deporting Jews to Nazi death camps, but it must remain vigilant. Increasingly, there seems to be a return to the right-wing, anti-minority mentality which so marked the Vichy regime. Marine Le Pen and the right-wing Front National continue to make political gains, winning almost a third of votes in regional elections last month. In this context, the opening of the archives should be treated as an opportunity to re-engage the French public with the history of far-right extremism and its consequences. Learning the lessons of the Holocaust is a vital part of combatting racism today. The Vichy archives offer an in-depth look at the role of individuals in oppressing minorities, and also in defending them. It is the choices and actions of individuals which drive the direction of society. For the French nation today, diverse as it is, this is an opportunity to reflect on the fact that each citizen’s personal choices will directly influence the future of their nation.