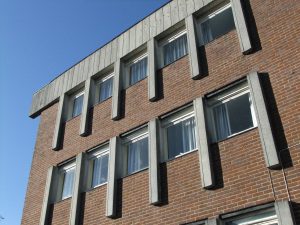 The question of how to go about building a town elicits, at face value, a simple answer: houses, shops; schools; perhaps a church. But it was the question of how a town is truly created —how its people mesh with each other and, how the combination of geography and community eventually contribute to the identities of its inhabitants— that the planners of 1940s Britain were tasked with.

Lewis Silkin, chair of Town and Country Planning under Clement Atlee’s government,  passed the New Towns Act in 1946, in a move which saw existing ‘garden cities’ designated as new towns, and saw the power to choose areas of land for urban development passed to the government. The first of these developments became Stevenage in Hertfordshire; by the mid-1950s, ten more towns had been established.

The act can be argued to have been motivated by two main factors. Firstly the success during the inter war years of suburban cities such as Welwyn Garden City, built to accommodate a new demographic of commuters who craved the greenery and space that cities were unable to offer. Secondly, the creation of the Welfare State, proposed by William Beveridge in 1942. The system, which included the creation of the National Health Service and council housing, was seen by many to offer the opportunity for a fairer society, comparatively free of class struggle. It was hoped that new towns would embody these ideals, with brand new housing on near identical estates, open concrete plazas, and none of the crowded, dirty conditions which characterised the poorer areas of pre-war British cities.

Silkin laid out bold ambitions for the new towns, stating that their ability to construct a “spirit of friendship, neighbourliness and comradeship” would provide a marker for their success. The success of these objectives is debatable, and indeed, much research into the impact the new towns had on their burgeoning populations suggests a number of problems within the new communities.

One phrase which became popular in the aftermath of the act, throughout the 1950s, was ‘new town blues’, a phenomenon which some scholars argue was common among new town inhabitants, characterised by “problems of loneliness, of physical and psychological disorders” (as written in Mark Clapson, 1998). The issue of loneliness appears to have been particularly pertinent to the new town experience. Research suggests that inhabitants often felt cut off from the wider world, and in particular from the cities whose overspill population they sought to accommodate. Clapson has explored the effect on existing familial relationships caused by the move into a new estate in one of Britain’s new towns. With a particular focus on women, Clapson argues that it was a common for young housewives to be “missing mum”, which was “symptomatic of a wider problem of adjustment to new estates with no established family or friends close by” (Clapson, 1998).

While some contemporary reports from new town inhabitants contradict such research (Maureen Davis-Poynter, a former town councillor for Crawley, reported in 1964 that the media reports of “lonely women crying their eyes out […] were just not true”), Clapson argues that although this phenomenon is difficult to quantify, residents did indisputably experience a degree of emotional suffering despite the careful geographical and architectural planning of their new towns. Contemporary news reports agree, with journalist Merrick Winn labelling the north east’s first new town, Newton Aycliffe, as “the town that has no heart” in 1957, and criticising its “perfect planning and perfect monotony” (The Daily Express, 1957).

The trajectory of the ‘new town blues’ concept can be traced by comparing early sources to more recent research. S. Goh and P. Bailey’s 2007 report on Cambourne in Cambridgeshire—a community planned and built following the Town and Country Planning Act 1990—called for town planners to “promote social cohesion at the same time as building the physical environment” and noted the “high levels of mental health problems” among residents of Cambourne. In this way, it can be argued that the problems originally raised regarding ‘new town blues’ in the 1950s still exist, to an extent, within 21st century new towns. 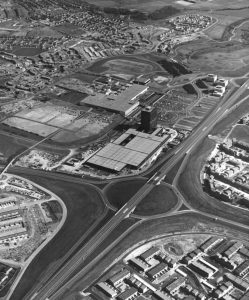 An aerial view of Washington, a North Eastern new town

Of course, it is important to acknowledge the well-intentioned reasoning behind the creation of such towns. In a recent Guardian article, Jonathan Glancey described the idealistic view of new towns as “post-war English society’s level playing fields, ideally free of class distinction, private property, public schools and dirty drains.” However Glancey also makes the convincing argument that it may be the ‘undesirable’ elements of city life—caused by crowded cities full of different classes co-existing— that actually contribute to a city’s “emotional core”. The belief that creating a town within a vacuum heavily reduces a sense of history and community, is one which is presented both within ensuing scientific research and in the above cultural commentary.

To use a now infamous example, John Betjeman’s poem ‘Slough’ alludes to the inorganic emergence of these towns, often built round industrial estates. The “air conditioned bright canteens” full of “tinned minds, tinned breaths” offers a flavour of the formulaic claustrophobia often found in these towns. Unlike older, more organic communities, new towns were lacking in a cultural and historical landscape. Thus it seems inevitable that their inhabitants too would face a sense of rootlessness and disconnection from wider society.

The New Town Act can be seen from two perspectives: firstly, as a bold and well intentioned experiment on the part of town planners. Towns such as Newton Aycliffe and Crawley demonstrate a desire for equal opportunity and clean living, away from the markers of class which were all too obvious in inner city life. However, with retrospect we can view certain elements of the ‘problematic’ city existence as conducive in fact to a sense of community and shared history—elements which are missing from the new town experience of the last seventy years.