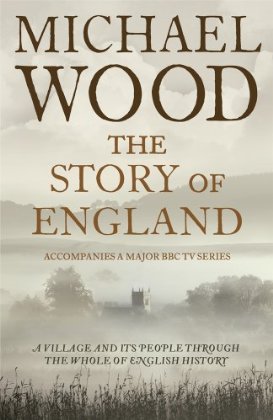 The history of England has been re-told countless times. Undoubtedly there are few people who do not possess a general knowledge of how England became the nation it is today. Yet in Michael Wood approaches English history from a refreshingly new perspective. Wood bases his thoroughly entertaining account on the microcosm of the Leicestershire village of Kibworth. However, rather than concentrating solely on the history of the village, or even focusing on a singular period in England’s history, Wood ambitiously traces the entire history of our nation. Kibworth becomes a foundation from which Wood explores the history of England as a whole. Kibworth really is the definitive “Little Britain”.

As Kibworth’s home county, Leicestershire is the predominant focus of The Story of England. One might ask why people from elsewhere in England would be interested in the origins of a seemingly obscure and relatively unheard of village. Wood seems to anticipate such misgivings in his introduction, in which he justifies his reasons for choosing Kibworth as the basis of his studies. His access to the archives of Merton College Oxford was clearly a major deciding factor. Since Merton College became the landlord of the village in 1270 every aspect of village life has been recorded, providing almost 750 years of evidence. Thanks to Michael Wood’s perseverance and enthusiasm, clearly evident through his writing, we are able to access this astonishing link with the past.

In many ways, Kibworth is a stereotypical English village with a church, pubs, a village hall, cricket club and a vibrant community. But from this ordinariness Wood is able to extract the seemingly extraordinary. Its central location in the country means it was affected by many of the key historical events that subsequently spread elsewhere. For instance, the Lollard movement of the fourteenth century, inspired by the beliefs of John Wycliffe, was strongly endorsed by some of Kibworth’s inhabitants. The married couple Roger and Alice Dexter were publicly humiliated for their radical ideas, whilst Walter and Nicholas Gilbert were executed for their supposed heretical beliefs. Yet, despite the extreme nature of such examples, Michael Wood repeatedly makes it clear that the history of Kibworth is not unique and, reading the book, it is easy to imagine the events in Kibworth being mirrored in communities across England and indeed Britain as a whole.

Interestingly, Wood has chosen to base his study solely on “England”, rather than Britain. Whilst this might seem a particularly selective, or even nationalistic, choice, it is an understandable one. Wood’s summary of English history is ambitious enough as it is, without having to consider the histories of Scotland, Wales and Ireland too, each country having an equally rich national heritage.

Michael Wood tracks the journey of Kibworth from the fall of the Romans through to the twentieth century. Naturally, the earlier years of village history are less well documented and Wood often relies on historical imagination rather than fact. As a result, the first few chapters are sometimes repetitive and Wood frequently reminds the reader that he is “imagining” the historical events based on the limited evidence available. For example, when recounting how the land of Kibworth was formally given to the wealthy estate owner “Cybba”, after whom the village is named, Wood says “we need only a little imagination to picture this founding moment” and for three pages proceeds to describe what we can only assume is at least a partly fictitious eighth-century Anglo-Saxon scene. Nevertheless, Wood is evidently self-aware of the faults in his interpretative approach, which adds to the endearing quality of his writing.

Furthermore, the book certainly does not suffer from such artistic license. In many ways it benefits from this narrative creativity. As the title suggests, the book is indeed a “story”; a factual narrative of the origins of a typical English village. What’s more, the lack of evidence that hinders Wood’s factual accuracy in the early chapters is more than accounted for by the wealth of evidence available in the years following the thirteenth century, due to the help of the Merton College archives.

What is particularly interesting about The Story of England is Wood’s ability to present history from the perspective of ordinary people. Whereas history is renowned for being written by the victors, Wood is careful to ensure that he tells the story of the peasants in the village, rather than the lords. It is remarkable how Wood brings the history of the village to life through his exploration of its past inhabitants. Particularly vivid is his depiction of the Black Death and the impact it had on the people of Kibworth. Wood begins the section by describing the jollities of the wedding ceremony of William Carter and Emma Cok in the summer of 1348, creating a stark contrast with the scenes of death and suffering that follow. Amidst the tragedy and sorrow, we learn that both Emma and her mother-in-law fell victim to the plague and are told the heart-rending story of Alice Polle (whose descendants remained in the village until the sixteenth century) who gave birth to a son during the Black Death whilst still grieving the recent death of her husband Robert.

As readers, Wood enables us to follow the growth and development of families over several generations, sharing in their times of hardship and rejoicing in their good fortune. Indeed, by the end of the book I found that I had developed a sentimental attachment to many of the “characters” whose lives Wood recalls. One character whom I particularly admired was Tom Taylor, the husband of the suffragette Nellie Taylor, who supported his wife despite his own family’s disapproval of her actions. Although it is easy to be lured into the pretence that Wood’s account is, indeed, a “story”, owing to the almost fictional characterisation of the Kibworth people, Wood constantly describes them in relation to historical events and facts, never letting us forget that these were once real people. This understanding heightens the emotional intensity of Wood’s writing.

A basic knowledge of English history would be helpful when reading Wood’s book but it is certainly not essential. Wood writes in such a way that he both analyses evidence and informs the reader simultaneously. Although he spans English history from the Late Antiquity to the twentieth century, no period of history is rushed and Wood adopts a detailed evaluative approach towards each historical event. Consequently, despite the novelistic approach adopted by Wood, I certainly do not feel the book loses any merit as a serious historical account. Perhaps the fact that it is accessible to the uninformed reader makes The Story of England more worthy, as history should be available to everyone, not merely to the scholarly elite.

Wood’s honesty in the book is especially appealing. He is conscious of the implications of writing history and does not pretend to give a definitive interpretation of any historical event. For instance, when explaining the changes to the parish church of St Wilfrid, which had its medieval interior stripped at some point during the sixteenth or seventeenth centuries, Wood initially holds the reforms of Edward I as being accountable, followed by the reforms of Elizabeth I and ultimately points to the Puritan branch of the Civil War as being the possible destructive force in the changing interior of the church. Yet it is these historical contradictions that make the book so interesting. They leave room for personal interpretation, resulting in a more enjoyable read. Whilst reading the book I felt as though Michael Wood was sharing his findings with me. I was invited to explore the history of Kibworth for myself, rather than simply being lectured by an anonymous and omniscient author.

The Story of England is an entertaining and informative account of English history and, for those who missed Wood’s recent six-part BBC TV series, the book is certainly a worthy substitute! Michael Wood offers a rare insight into the lives of ordinary people and it is arguably only through connecting with the people of the past that we can truly understand the real “story of England”. Rather symbolically, Wood ends the book with the words of a villager, Leslie Clarke: “our grumbling, friendly, warm-hearted, gossip-loving village truly represents, with ten thousand others of her kind, that free spirit – true and precious – which is, and will be, for ever England.” In this sense, Michael Wood’s The Story of England is truly representative of England’s remarkable past which always has been, and forever will be, a story told by the people.