Is History written by men? 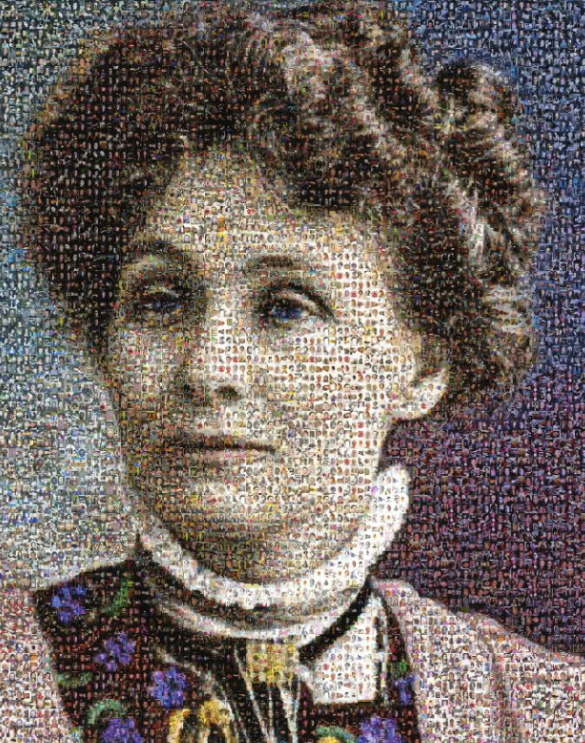 Emmeline Pankhurst, one of the most recognisable female figures in British history.

Thomas Carlyle once claimed that “the history of the world is but the biography of great men”. Is this really true? And if so – why? Does the ascendancy of male figures in history books tell us more about practices of the past or the present? Certainly, the question of whether history is written by men is a highly complex and controversial issue that opens up several different avenues of debate: the role of male figures in shaping our past, the suppression of female voices throughout the centuries, a lack of neutral and varied sources from which historians might work, inherent sexism within the academic field today… the list goes on. In order to ensure both the validity of the history we write today, it is crucial that we review the way we approach it.

It is important at this point to differentiate between male dominance within historiographical work, and the overarching role of men in events of the past (although the two are not always mutually exclusive). The nature of a patriarchal past unfortunately dictates that the vast majority of organizations and societies within countries of the world were created, developed and conducted within this framework. Men therefore occupied prominent and influential positions: for the best part of the past, they were the rulers, the scientists, the policy-makers, the revolutionaries, the soldiers. To a certain extent, they still are today. If you asked a secondary school student to name some influential figures of the twentieth century, for example, it is likely that they would name some of the following: Hitler, Goebbels, Chamberlain, Churchill, Nixon, Kennedy, Tito, Lenin, Trotsky, Castro, Stalin… Chances are, they would name more men than women. But why is this case?

The lack of studies on historical women in general does not mean that there were not any influential female figures in the first place. On the contrary, (largely elite) women could obtain power, but often their relationship to their male counterparts was what would define their destinies and futures, and most official positions of authority were male-oriented. Despite this limitation, we still have powerful female figures in history – we have only to consider the lives and impact of Queen Victoria, Rosa Parks, Margaret Thatcher, Emmeline Pankhurst, Marie Curie, Boudicca, Mary Queen of Scots (the list goes on…) to see this. We know about the lives of these women because their actions and behaviour stood out to the point where their contemporaries and historians alike could not ignore them.

Yet we also know about the past today because of the paper trail that our ancestors have left behind. The dilemma we face is that women, due to the ascendancy of male voices (often recording their own achievements for posterity) left behind a fainter trail. The majority of primary materials used today to further academic research were planned, written and signed by men. As a result, historiography today seems still to replicate male opinions and voices. In some ways, then, the lack of representation of women in these surviving documents doesn’t necessarily mean that history is being deliberately written from a male perspective. On the contrary, a conscious effort has been made in recent years to uncover the lives of the women behind the curtain of remaining evidence. Particularly important is the expansion and variety of sources used, moving away from historiography focused solely on political and governmental archives – and looking more at diaries, testimonies, propaganda, artwork, journal pieces, and so on. Yet with a practical deficiency of information, it is clear that we will never be able to fully reconstruct the lives of women from the entirety of the past. Sources from the medieval times, for example, are rare, and limited in their capacity to tell us about role of ordinary men, let alone ordinary women.

So, how should women be studied in history? While it is important to increase efforts in equal gender representation, we must not to fall into the trap of exaggerating the role of past women. A controversial movement, known as ‘herstory’, defines itself as ‘history written by feminists’, or told from a ‘woman’s point of view’. Personally, I appreciate that academics need to pay particular attention to women’s history, but we cannot jeopardise the validity of historical truth for the sake of inclusion. Christina Hoff Sommers, in her 1994 book, Who Stole Feminism?, has criticized this movement and argues that the infusion of a deliberate (and perhaps extreme) ideology into education comes at the expense of knowledge. I agree with Sommers in that a pre-existing bias towards any group of people (to the point where certain pieces of information may be understated or ignored, and others exaggerated) is dangerous territory for any historian. Although it is, of course, impossible to remove all partiality from history-writing, the deliberate inclusion of personal political views into a piece of academic writing can unnecessarily taint it.

Another way to approach this question is to identify the gender of those who are actually writing history. Slate, a US journal, looked into the authors of 614 popular history titles published in 2014. They discovered, shockingly, that an overwhelming 75.8% of them were written by men. A staggering 94% of biographies on women were written by women, a fact that Imogen Robertson, Chair of the Historical Writers’ Association in the UK, believes is multilayered and not as straightforward as we might otherwise think:

“The gender bias is horribly clear when you look at what women are supposed to write about: men write about grand expansive histories, the thesis-driven revisionist world views, and they mostly have the Second World War to themselves. Women are allowed to write about, well, women… I can’t say, though, if that is because publishers are refusing to print grand histories by women, or women are not offering to write them. Female historians want to make sure ignored voices from the past are heard, and that might skew them towards studies of neglected women.”

Out of the forty-six individuals who make up the academic staff in the History Department at Durham University, only fourteen of them are female. This could perhaps be coincidental, yet a glance at lists of academics at other top UK universities suggests a similar trend. This may be because it just happens that more men want to pursue history to a higher academic level… or it could be that women feel discouraged and at a disadvantage so do not seek these opportunities in the first place. Obviously, statistics also point to larger issues of female representation in the academic workplace.

What should we do in the future to ensure that women are treated equally in both historiographical representation and academia? If we overcompensate, we risk political and ideological views jeopardising the validity of academic work. However, if we continue down the same path, we would be turning a blind eye to the women who contributed enormously to our lives today. There is no obvious remedy to this convoluted problem. A first step, however, is to increase awareness of this (often subtle) sexism, as this piece aims to do. In doing so we might encourage historians to seek out a multiplicity of voices in their depictions of the past.