Anastasia Maseychik in History on 1 February, 2017. 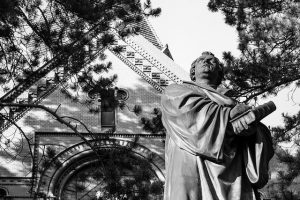 A statue of Martin Luther

Durham History Society recently hosted Adam Morton for the first talk of Epiphany term entitled ‘The Illusive Monster: Anti-Popery in British History’. Morton, a lecturer at Newcastle University, is particularly interested in trends of anti-Catholicism in England. This subject provided the basis for his lecture.

Coming together to unite against a common enemy has always been successful way of smoothing over differences, happening countless times: from Cromwell’s Republican England to the Allies in WWII. However, more often than not once the common enemy falls, fractures form along fault lines and relations again disintegrate. But what if the common enemy can never be found, let alone defeated? What if it was, as Morton coins it, an ‘illusive monster’?

This is the role of anti-popery to British identity. Our peaceful union with Scotland and national self-identity at its heart relates to common intolerance. But anti-popery was also much more than that. Being as it was an ‘illusive monster’, it was always lurking in people’s minds, and as a result, a frenzied-like reaction could be provoked by mere accusation of ‘popery’. Due to this, ‘popish’ language also became the language of evil, which was then used politically against anyone undesirable.

But in order for this anti-Catholicism to grow, first came the rise of Protestantism. For those not in the know: Protestantism is a form of Christianity which evolved during the Reformation, upon Henry VIII’s break with Rome. It was centred on the belief that some Catholic traditions were based on misinterpretations of the Bible – which, after the Pope refused to reform them, gave rise to anti-popery.

It is in this way that the papacy came to be seen as a hotbed for corruption, and the war of religion slowly began to unfold, lasting several hundred years. Catholicism had the upper hand however; having already existed for 1500 years. The danger for Protestants was being accused of heresy.

The answer was found in the Book of Revelations. This part of the Bible specifically spoke of the existence of a ‘False Church’ and a ‘True Church’, the former being headed by the Anti-Christ (i.e. the Pope). This idea was then cemented by sympathetic theologians, such as John Foxe, who depicted the two paths of the churches on the cover of his book ‘The Acts and Monuments’.

Whilst the justification for Protestantism was cemented in literature at this time, the concept of popery was not. Much like the grotesque beast it hoped to represent, it began to shape-shift, becoming a means to the ends of another constantly mutating concept; politics. By the reign of Elizabeth I, the Church of England headed by the monarch (once praised as the ‘True Church’) was accused of popery, its head a ‘petty pope’. During the admittedly problematic reign of Charles Stuart, he and many of his advisors were accused of popery, a large contributing factor to the outbreak of the English Civil War. Interestingly it is in this war that the beginnings of union with Scotland began.

Sometimes, accusations of popery had little to do with Catholicism, but much to do with politics. In this way, ‘popery’ was constantly redefined.

Ultimately, over time Protestantism (and therefore England) could be further and further defined in opposition to Catholicism, and did so knowingly. It achieved this by making its intolerance to Catholicism a testament to being a good Christian, Thomas Beard writing: ‘the more we know and detest Anti-Christ, the more we are enamoured with Christ’. But, in so doing, the conceptual hallmarks of modernity started to fabricate: reason vs irrationality, liberty vs tyranny, and ironically, tolerance vs intolerance.

Adam Morton ultimately argues for the importance of the concept of ‘popery’ to British identity and the growth of modernity, but how the concept slowly and continually shifted to mean many things other than Catholicism; an illusive monster.