How the Colleges got their Names (and other stories) 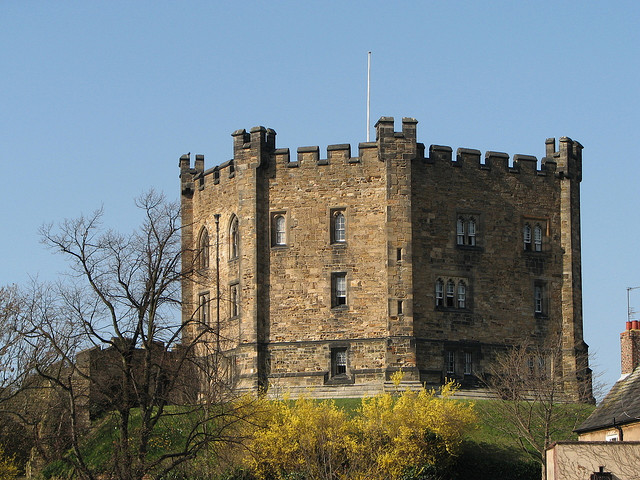 University College – the most imaginatively named college of them all?

It’s that time of year again. Soon enough, colleges and departments will be awash with bright-eyed freshers, eagerly anticipating the challenges and excitement that life away from home for the first time will bring. Perhaps one of the questions milling through their minds, whilst trying to keep their eyes open through yet another introductory lecture or as they queue for last minute costumes at Mr Cloth, will be:

‘College of St Hild and St Bede…funny name…wonder why it is called that?’

Admittedly, perhaps not a major concern – during the first few weeks of university that distinction is only usually awarded to important matters such as finding friends and pondering over the age-old conundrum of whether to put your red and white stripy top in a whites wash or a colours wash. Yet with an array of seemingly arbitrarily named colleges, at least some people will have given the subject at least a cursory thought. These hypothetically curious people will be delighted by the following guide to how each college came to be called what it is today.

We’ll start with the most obvious. University College was the university’s first college. Presumably those who founded it realised that it was a) a college and b) part of the university, and came up with a suitably descriptive name for it. ‘Castle’, its does-exactly-what-it-says-on-the-tin nickname, probably doesn’t require too much explanation either.

Trevelyan, Collingwood and Ustinov are all named after suitably prominent academics and writers (a historian, a mathematician and university chancellor Sir Peter Ustinov respectively). Grey College takes its name from Charles Grey, 2nd Earl Grey, notable abolitionist and Prime Minister during the foundation of the University. The Reform Act, passed during his ministry in 1832, heralded the end of slavery throughout the British Empire in 1833.

Being a prominent enough member of Victorian society to get a Durham college named after seems to run in the family. Durham’s newest college is named after his niece, nineteenth century feminist Josephine Butler. She was heavily involved in both furthering higher education for women and campaigning for the welfare of prostitutes in the face of the invasive checks for venereal diseases implemented by the Contagious Diseases Acts of the 1860s.Meanwhile, Hatfield is named after a fourteenth century Prince-Bishop of Durham, who was elected to the office of Lord Privy Seal in 1344. Van Mildert is named after William Van Mildert, another bishop of Durham, instrumental in the founding of the University. He gifted the University half of Palace Green and even moved out of the castle so that it could serve as a hall of residence for students. This was generous of him, although he did have a spare one lying around in Lumley Castle, just a couple of miles out of town, ready for him to move into.

There is also a glut of colleges named after saints, ranging from the most famous ones to the slightly more obscure. Durham’s first all women’s college was founded in 1899 and named St Mary’s, after the virgin mother of Christ – an attempt, perhaps, to remind its students of their expected adherence to the strict buttoned-up sexual morality of the time. When the University chose to set up a theological college in 1909, they chose to name it after the gospel writer St John, presumably due to the parallels between John’s early attempts at spreading the word and its inhabitants’ duties as future ministers.

There are also a number of colleges named after more local monastic saints (of varying degrees of sanity), highlighting the region’s importance in Anglo-Saxon times. The kingdom of Northumbria was not only one of the most powerful kingdoms in England, but particularly important in the spread of early Christianity throughout the island. In part, this was due to figures such as St Aidan, an Irish bishop who had spent much of his life on the isolated island monastery of Iona, just off the west coast of Scotland. He came to Northumberland to preach to the largely non-Christian population of the time and set up a monastery on the small island of Lindisfarne in around 636.

Many of the saints after whom the colleges are named played some sort of role in the Synod of Whitby in 664, a council called by Northumbrian sub-king Alchfrith to decide whether to adopt the Roman style of Christianity or stick with the Irish variety (and possibly to try and challenge the authority of his father and over-king Osiwu). Overall the Roman monastic rule won out and clergy adhering to Irish customs had to either change their customs or face losing their positions.Cuthbert, for example, was the patron saint of the monks of Lindisfarne. Due the fact that it contained a tempting amount of gold-encrusted chalices and altarpieces defended solely by a few, frugal ascetics, the monastery proved a popular target for Viking raids. The monks never quite figured out how to make them go away, and were thus driven off Lindisfarne by the Danes in 875, taking Cuthbert’s remains with them. The community finally settled in Durham in 995, building a church for the relics of their patron on the site where the Cathedral now stands.

According to his biographers Cuthbert had a bit of a knack for miracles, and accomplished everything from entertaining angels to being washed and dried by otters after having spent the night praying in the sea – as you do. On a slightly more believable note, he was responsible for persuading the monks of Lindisfarne to adopt Roman Christian customs instead of their traditional Irish ones post-Synod.

We know this partly because of the writings of a Northumbrian monk called Bede. Often considered the father of English historical writing, his Ecclesiastical History of the English People is an invaluable yet biased account of the conversion of the Anglo-Saxons to Christianity. Bede being a firm adherent to the Roman style of Christianity causes him to downplay the part that some Irish and Romano-British contributions played, and as a patriotic Northumbrian he tends to emphasise the achievements of his compatriots over other churchmen.

St Chad, he tells us, was a bishop who was known for converting the previously staunchly pagan kingdom of Mercia and replaced the Irish Colman, who left for the Isle of Iona after his side’s defeat at the Synod. He also mentions Hild – Hild-Bede’s other namesake. She was the abbess of Whitby during the time of the Synod, who also changed her community’s practice to fit in with Roman customs after the resulting decision.

You will now no doubt be brimming with interesting facts that will be brilliant conversation starters during fresher’s week, if you’ve already used up all the small talk about what course you’re on and the societies you’re going to join and (if you’re really desperate) what the furnishings in your college room are like. Alternatively you may have forgotten someone’s name despite being introduced to them at least twice, and need a suitably out-of-the blue comment to keep up conversation whilst you try and remember for the life of you where you met this person, and what they were called, and why they’ve been so inconsiderate as to remember you and make things awkward. It’s better than resorting to telling them stories from your gap year, at any rate.