From revolution to topless protest: a brief history of feminism in France

A Suffragette meeting on Rue Montmartre, Paris, in March 1914.

France. A land of baguettes, wine-fuelled debauchery and liberated women who don’t shave their legs. Birthplace of the Enlightenment, of topless sunbathing and of Simone de Beauvoir, but also, in many areas, intensely Catholic, conservative and family-friendly. A misogynist nightmare for some, a feminist paradise for others.

Feminism in France, as a political movement, has its origins in the French Revolution of 1789. It developed much like feminism in the UK and USA; the first wave concentrated on women’s suffrage, the second broadened its scope to a wide range of issues in the newly liberated climate of the 1960s, and the third attempted to address some of the failings of second wave feminism from the 1990s on, focusing more on ideas like queer theory and intersectionality.

As a philosophy, however, ‘French Feminism’ refers to a group of thinkers based in France in the period from around 1970 to the 1990s. It is distinct from Anglophone feminism in a number of ways – more philosophical and literary, more interested in psychoanalysis and theories of ‘the body.’ French feminism introduced the idea of ‘écriture feminine,’ (literally, ‘feminine writing’) as a subversive exercise in the phallocentric arenas of literature and philosophy. Notable theorists include Hélène Cixous, Luce Irigaray and Julia Kristeva.

Politically, women began to vocally and openly demand their rights during the French Revolution, in which they participated fully. In 1789, some months after the formation of the National Assembly and the storming of the Bastille, crowds of women marched on Versailles, beginning the riots that would force the royal family to move to back to Paris. Marie-Jean Caritat and her Cercle Social agitated for full political rights for women. In 1791 Olympe de Gouges published the notorious Declaration of the Rights of Woman and the Female Citizen. She was guillotined two years later and ultimately the Revolution failed to bring full political rights for women.

From the early 1800s, the feminist movement became closely aligned with the Republican and Socialist struggles of the Romantic period, leading to the Revolution of 1848 and the proclamation of the Second Republic. Feminists like Louise Michel were active in the Paris Commune, which took over Paris from March to May 1871. Eventually suppressed by the French army, Karl Marx saw this revolutionary socialist government as an example of the ‘dictatorship of the proletariat’ and it was broadly feminist in its politics.

The women’s suffrage movement took off in the early 20th century with Jeanne-Elizabeth Schmahl and Jane Misme’s moderate French Union for Women’s Suffrage. They suspended their activism during World War I, and it was widely assumed that women would be granted the right to vote in recognition of their wartime contributions. A women’s suffrage bill was in fact passed by the Chamber of Deputies in 1919, but was blocked by the Senate several times between 1919 and 1936. The Union was inactive during World War II, and it was not until 1944 that women finally gained the right to vote.

Philosophically, ‘French Feminism’ starts with Simone de Beauvoir and the 1949 publication of The Second Sex, a pioneering analysis of women’s oppression. Beauvoir was an existentialist feminist, famously proclaiming that ‘One is not born, but rather becomes, a woman.’ For many theorists, this marks the beginning of the Second Wave. 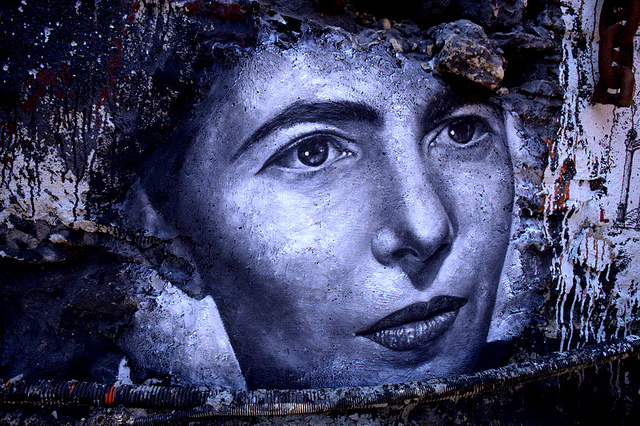 The 1960s brought liberation in many different forms. Feminist activist groups like ‘Psychanalyse et Politique’ were formed. The Neuwirth Law legalised contraceptives in 1967. May 1968 saw mass student revolts and worker strikes in French universities and factories. Feminist organisations participated in the movement, which is still contentious for French historians, regarded by some as an assertion of liberty in the face of stifling bourgeois conservatism and by others as a selfish, juvenile demand for individualist personal pleasure. Nevertheless, many see May ’68 as the real beginning of the contemporary women’s liberation movement.

The first meeting of the Mouvement de Libération des Femmes (Women’s Liberation Movement – MLF) took place in 1970. Their first public demonstration, by activists including Christine Delphy and ‘radical lesbian’ Monique Wittig, was the laying of a wreath at the grave of the Unknown Soldier in Paris, in honour of his wife, who was even ‘more unknown’ than him. One of their posters read ‘One man in two is a woman.’

Feminist groups were extremely active throughout the 1970s, a decade which saw huge progress towards gender equality. Feminist lawyer Gisèle Halimi formed the organisation Choisir (‘To Choose’) to protect the women who had signed the ‘Manifesto of the 343 Bitches,’ admitting to having obtained illegal abortions. Abortion was legalised in 1975 thanks to the determined political efforts of Health Minister Simone Veil, despite vehement opposition.

‘French Feminism’ is really a product of the 1970s. Luce Irigaray published her first major work in 1974 – Speculum of the Other Woman – an important critique of women’s exclusion from Western philosophy and psychoanalytic theory. The next year, Hélène Cixous published her influential work The Laugh of the Medusa. This essay advocates ‘écriture féminine’ (feminine writing) in a critique of phallogocentrism (a term coined by Jacques Derrida to refer to the privileging of the masculine (phallus) in the construction of meaning). ‘Écriture féminine’ became the cornerstone of ‘French Feminism’ as a theoretical movement. It privileges non-linear, cyclical writing and the centrality of the female body. For Irigaray, it derives from the diffuse character of women’s sexual pleasure (‘woman has sex organs just about everywhere’).

Feminist theory in France remains preoccupied with questions of ‘écriture feminine’ and psychoanalysis up to the present day. 21st century ‘third wave’ feminist activists are a diverse collection of groups. Some influential organisations include Osez le Féminisme! (Dare Feminism – campaigning for gender equality in all areas and against violence against women, including prostitution), Ni putes, ni soumises (Neither Whores nor Submissives – responding to violence against women in predominantly Muslim immigrant communities) and Femen (the notorious Ukrainian group now based in Paris, famous for their controversial topless protests). 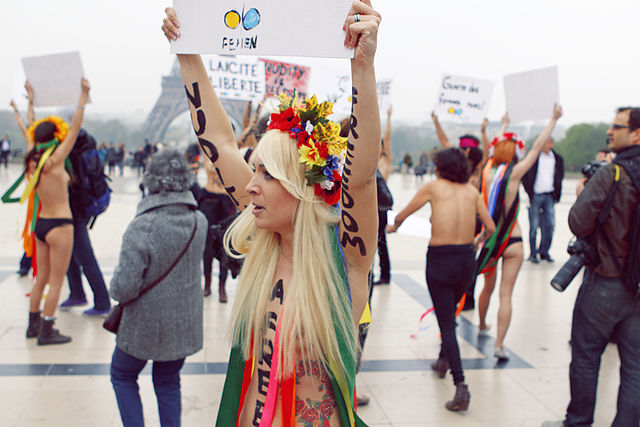 A Femen protest in front of the Eiffel Tower, Paris, in March 2012.

Feminism in France, like elsewhere, has never been a unified movement. Women of diverse backgrounds and identities have always fought for their rights and continue to do so. Major contemporary debates within the movement centre on sex work and the place of women in Islam (notably the right of Muslim women to wear the hijab). While France remains an incredibly sexist country in many ways, its legacy of activism and revolution is a point of pride for French citoyennnes and feminism is not such a taboo word for the majority of the population. In facing the challenges of patriarchy in 2016, French feminists have a rich and inspiring history on which to draw.