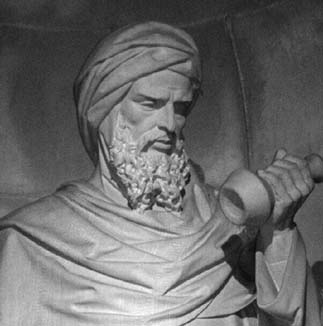 Ibn Rushd – a man of many ideas

Most of us could probably say that we are, to some degree, familiar with at least a few of the great Western philosophers: Locke, Plato, Kant, et al. And really, figures like those certainly deserve the recognition that they currently boast. After all, it can hardly be denied that they were enlightened minds, spawning some of the most intriguing ideas that mankind has ever been exposed to.

However, with that said, it is often all too easy to forget that philosophy, like all disciplines, is a rich and diverse tradition, and not one that is unique to the Western world. One of the greatest things about studying world history is that it introduces you to figures and, perhaps more importantly, ideas, that transcend cultural boundaries. That so many of those figures have gone unnoticed and are deprived of the celebration that they deserve is in itself something of a crime.

Ibn Rushd, also known by the Latinized ‘Averroes’, is certainly one such figure. He was born in Cordoba in 1126, at the tail end of what some might call the ‘Islamic Golden Age’, a time full of such intellectual progress and development that it could give the Italian Renaissance centuries later a run for its money. Belonging to an influential family, Ibn Rushd had the privilege of being educated in a variety of different disciplines, spending most of his younger years under the tutelage of renowned philosophers and jurists. During this time, he became exposed to principles and traditions that largely concerned themselves with rationalistic approaches to life, all exalting the ideas of reason; no doubt this formative period was critical to his development as a thinker.

Unsurprisingly, his diverse education was followed up by a very diverse career as well; throughout his life, Ibn Rushd was a cadi (a jurist), a doctor, a writer, to some extent at least, and a philosopher. Many would have struggled with just one of those professions, let alone trying to juggle all of them at the same time. On top of that, simply said, Ibn Rushd was very good at everything he did as well. He became the Supreme Cadi of Cordoba, and became private physician to the Caliph himself. But, nothing here really makes the man remarkable beyond simply being a talented, if multi-faceted, individual. No, though he was a jurist and physician by trade, Ibn Rushd’s greatest contributions to the world came in the form of his philosophy and, more precisely, the highly influential commentary work that he performed.

Strangely enough, Ibn Rushd’s attitude towards philosophy seems to have been shaped from pretty much everyone besides actual philosophers, at least initially. His grandfather published a monumental text on the application of law, the Muqadammat, and though Ibn Rushd never met the man, he was sure to have actually read the work, as his ideas of pure reason being at the heart of intellectual insight and key to understanding the world at large are largely similar to the sort of values that his grandfather called for amongst the cadi. Abu Jafar, the doctor that tutored Averroes on medicine, introduced him to the ideas of Aristotle, and instilled within him the all-important notion of a strong work ethic.

This leads in quite nicely to what Ibn Rushd dedicated a good deal of his time and effort to: his commentaries on the works of Aristotle. It is often forgotten that Aristotle’s works were revived, in a way, by Arab translators and philosophers, and indeed the ‘Master’ as he was known was very much venerated by Arab intellectuals at the time. Few, however, could ever really boast the same level of knowledge or understanding of Aristotelian texts as Averroes.

It is in this sense that it is rather difficult to understand just what Ibn Rushd’s own personal philosophies were; it is hard to say whether or not the commentaries he created were reflective of his own beliefs or if they were simply meant to build upon Aristotle’s works. However, regardless of just how far his own beliefs stretched in regards to some of the fundamental metaphysical issues that Aristotle explored, Averroes certainly made it a point to make sure that his commentaries could stand on their own. He realized that Aristotle was the progenitor of many ideas in regards to the immortality of the soul and the nature of knowledge, all very important matters of the day, but at the same time he avoided the fatal mistake of assuming that those were ideas that could not be further developed. He constantly made sure to challenge previous commentators and even the ‘Master’ himself, drawing upon his skills as a logician.

The fact remains that these prominent commentaries were heavily used amongst the 13th century intellectuals in the West; ‘Averroism’ was a highly influential movement. Indeed, even someone as renowned as Thomas Aquinas was influenced by Averroes and his exploration of dialectics and the concept of the soul. Averroes’ commentaries on Aristotle were critical to the growth of the scholastic communities that were on the rise in France and other centers of education. Some would even claim that Ibn Rushd was the father of secular thought, and that is not necessarily as far-fetched as it might seem; the man never truly concerned himself with joining his religious faith with his philosophical tendencies, and indeed left various aspects of his faith rather ambiguous.

It is a shame, then, that Ibn Rushd was never quite as renowned amongst his own contemporaries. Sadly, due to a backlash from religious conservatives who were starting to clamp down on philosophers on the claim that they detracted from pure theology, he was ostracized from his own community and it was only shortly before his death that his works were no longer banned. Regardless of that, though, his tireless championing of the power of human reason and intellectual capacity deserve to have him celebrated amongst the annals of time.