Extinct, or Used to Be 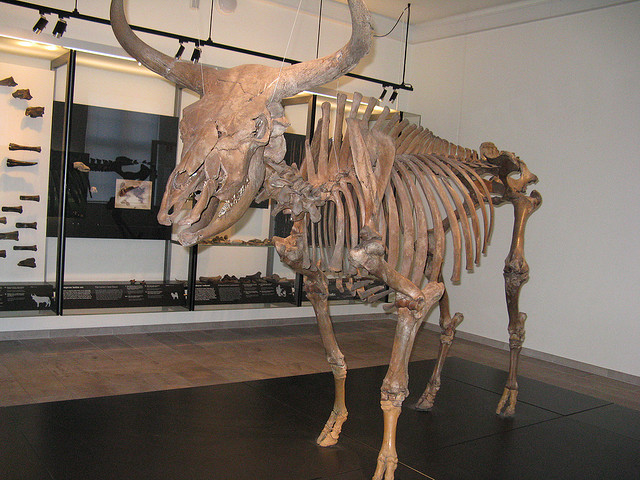 Aurochs – coming soon to a farm near you?

30,000 years ago, a small ground squirrel made history. Darting through the legs of a mammoth, and with Neanderthals a dying memory, it burrowed down into the permanently frozen soil to store its precious supply of seeds. Job done, it bounded back out and was never seen again. It may have forgotten where to look, become a snack for a hungry predator, or had some other accident befall it. All we know for certain is that it did not return.

Now researchers from the Institute of Cell Biophysics have been able to grow those seeds in a laboratory in Russia, meaning that they have smashed the world record for the oldest plant remains to be resurrected. When first taken back to Moscow, the scientists could not get the mature seeds to germinate, and so resorted to using ‘placental tissue’ of the plants to propagate the plant Silene stenophylla – a plant that still exists in the Siberian landscape. After comparing these with the older version, the scientists claimed that there were differences between the shape of the petals, thus giving rise to the suggestion that this type of study can reveal information on evolution, and past environmental condition, which can have implications for our current thinking on the lives of our early ancestors.

However, this leads us on to a debate which may soon be a hot topic. If it is possible to grow this plant, then is it also possible to grow extinct flora? And with the combined information we now possess about genetics and cloning, it could also be possible to bring animals back from extinction – but how ethical, or sensible, is this?

By bringing back plants and animals archaeologists and historians are given a huge boost in the study of ancient environments, and subsistence strategies. The information gleaned from them has the potential to revolutionize our understanding of the past, and this, to an archaeologist like myself, is an incredibly exciting prospect. But what we have to remember is that these animals went extinct for a reason – they were no longer suited to the environment in which they found themselves. The effect on modern-day populations may be catastrophic, and with the resurrection of plants may come fungi which could cause an epidemic of disease that nothing has immunity to. The question is whether this is pioneering research, or humans meddling with nature?

However, what we do know is that people are already attempting to bring back extinct animals – for example aurochs. The aurochs was a breed of large, dangerous wild cattle, that co-existed with mammoth and other mega-fauna, and is commonly found painted on cave walls. It lasted much longer than its prehistoric friends, but became extinct in 1627, when the last one died of natural causes. Yet in the 1920s Heinz and Lutz Heck, two German Zoo directors, started a program to ‘re-breed’ the aurochs from descended domestic cattle. They artificially selected the most similar breeds of cattle to each generation of aurochs, and bred them to create ‘Heck Cattle’, although the actual similarities between these breeds is still debated.

A more modern attempt to bring this creature back from the dead is known as the TaurOs Project, and is situated in Poland, with the intention of releasing aurochs back into the Polish forests. They are using a similar technique to their German predecessors, except for the fact they have the benefit of ancient DNA from aurochs so as to accurately recreate the beast. They have started with primitive breeds which are genetically similar, and crossbreeds have already been born.

But this isn’t a project undertaken merely for curiosity. By looking at living aurochses, archaeologists can perceive how they were hunted, biologists can discover what diseases they are susceptible to, and so improve the health of modern cattle, and environmentalists can use them in forests to eat away plants such as beech which are dominating the European ecosystem. However, there are safety concerns about the animals once compared to elephants by the Romans. Handling wild cattle is dangerous enough, handling an aurochs, which is far larger, may be idiotic – think less cow, more tetchy rhino.

This is a difficult topic, and with research in such an infantile stage, it is difficult to gauge the consequences of bringing back organisms from the dead. But with mammoth DNA now recovered, it is not be improbable to think that one day we may be seeing mammoth on the horizon.