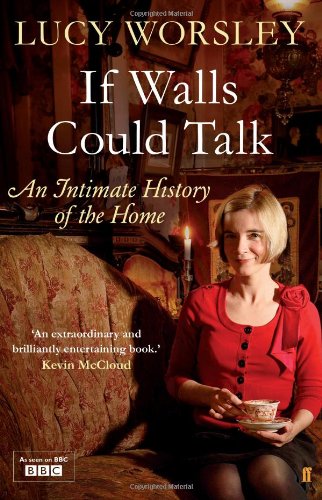 Durham Book Festival: Lucy Worsley will appear in the Town Hall next Saturday, (22/10/11).

When it comes to History, Lucy Worsley is nothing if not committed. Her recent BBC series, If Walls Could Talk: The History of the Home, saw her roasting hedgehogs on an open fire, washing sheets in fresh urine and shivering in the freezing February sea, all in the name of History. This is ‘experiential archaeology’ – the idea that by imitating the way people lived in the past, historians can better understand their subject. It also makes for surprisingly entertaining television.

On first hearing of the series and accompanying book, I’ll admit I was sceptical. I’m a fan of ‘big History’ – the ground-breaking, earth-shattering events which turned humanity on its head and shaped the modern world as we know it. The fall of the Roman Empire, for example. The Reformation. The Holocaust. A History of the Home, therefore, would never normally find its way anywhere near my bookshelves or television. Yet I couldn’t have been more wrong. Within ten minutes I was persuaded of the home’s importance to History. After all, where better to start when studying the past than with people’s daily lives? This is the History often lost to us; the stories of the ordinary people who lived through the major events that normally hog the historical spotlight.

Worsley’s TV series and book investigate how four rooms which we take for granted in a modern house – kitchen, bathroom, bedroom and living room – developed over time into what we recognise today. The changes have been remarkable. For example, the bathroom was almost unrecognisable from today’s washrooms until the nineteenth century, when (somewhat belated) developments in water supplies and underground sewers finally allowed the flushing toilet to catch on. Similarly, the kitchen’s significance as a room in the home has changed dramatically. In medieval times, there was no ‘kitchen’; only an open fire which served as the focal point of a family’s single-room dwelling. This custom was later reversed: wealthy and fashionable families situated their kitchens as far from their living quarters as possible so as to exclude food smells, and reduce the ever-present risk of fire. Only in the last hundred years has the kitchen retaken its place as a central room in the home.

It is developments such as these which make Worsley’s work so intriguing. We are often guilty – myself included – of ignoring the History which is all around us. If Walls Could Talk, far from being trivial or irrelevant, provides a fascinating historical insight into that which we take for granted every single day.

Lucy Worsley is appearing as part of the Durham Book Festival in Durham’s Town Hall, on Saturday 22nd October at 3:30pm.