Durham: the birthplace of the Gothic and a new identity 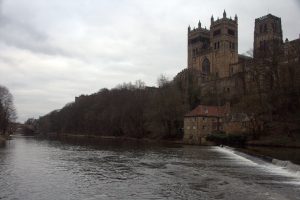 Mighty Durham Cathedral rests on the Great North Road, a bulwark against Scottish invasion and symbolic of the new political settlement of Norman England after the overthrow of the last Anglo-Saxon monarch, Harold Godwinson. It represents the incursion of the ecclesiastical power of Princes-Bishops into the secular realm and showcases the permanence of the Church in North-East England.

But there is more to Durham than mere shows of power or fortress might. It would be dismissive to ignore the importance of Durham as a feudal centre of the North or to reject the idea that the building of Durham Cathedral wasn’t defined by motives beyond the spiritual. In reality Durham Cathedral is representative of something more delicate, nuanced and important than these suggestions show. It is the birthplace of a key defining movement in the Middle Ages, namely that of Gothic architecture.

The cathedral was founded in 1093 in the aftermath of one of the North of England’s most destructive episodes, the Harrying of the North. This was the Norman response to a rebellion that had broken out 1069 when, despite warnings from the bishop Ethelwin, William the Conqueror had replaced the Anglo-Saxon Earl of Northumbria with Robert de Comines, a Norman Earl. On 28th January 1069, Robert rode into Durham with a party of men to claim his earldom. He was subsequently surrounded and slaughtered by a rebel force who then moved to York, killing the Norman guardian of the castle and a large number of his men.

Despite the initial responses of the Norman administration, the anti-Norman movement in the North gained strength. Sweyn II, King of Denmark, became involved in the rapidly escalating situation when the Northmen joined the English rebels in taking York by force. William’s response was both brutal and swift. He marched his army to meet the rebellion at York, however, by the time he reached York, the Danes had slipped back to their ships on the Humber estuary and the rebel army had fled. Enraged, William employed scorched-earth tactics in an attempt to imprint the strong hand of Norman rule on the populations of the North and starve the rebels of supplies.

Orderic Vitalis later described William as having ‘made no effort to control his fury, punishing the innocent with the guilty’. Historian David Starkey agrees, arguing that William’s actions set the Northern economy back decades, creating an event that would impact the Northern mentality for generations. However, when William came to appoint another feudal overlord of the North, he chose not a secular earl but a Prince-Bishop from the Church. In 1071, William Walcher was created the first Norman elected Bishop of Durham. This ecclesiastical office was recognised to have the same temporal authority of that of an Earl.

This reframed institution (predating the Norman conquest) was built on the foundations of an infamous moment of Norman brutality and oppression. However, in 1093, under Walcher’s successor William de St-Calais, it gave birth to a building that would shape the medieval mentality towards the perception of both ecclesiastical authority and its idea of paradise. From 1093 to 1096 the main focus of construction was the choir, the central body of the church. Upon its completion in 1135 work began on the nave. During the 39 year period of nave construction something remarkable happened. When standing at the west end of the nave looking east, we notice the eastern arches of the vaulting follow the traditional Romanesque (Norman) rounded arch form. Then as the eyes move increasingly westwards, the arches slowly become increasingly pointed until, at the very end of the nave, we have a Gothic arch. 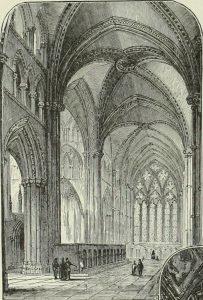 Pointed arches are found throughout the interior of the Durham Cathedral

This transformation of arch construction from Norman, to Anglo-Norman transitional, to Gothic, helps to map the very conception of Gothic architecture. Romanesque arches are replications of the architecture of Ancient Rome, and while impressive at their introduction, are heavy and can bear little weight. This means the use of such arches limits the ambition of the builders and overall architecture. In the same way they represent the heavy legacy of Roman Europe and the lack of technological advance to breed a new medieval defined architectural style. However through the ambition of the builders of Durham’s nave, the Gothic arch, although uncertain at first, takes shape. This arch can be deemed the birthplace of the confidence and vitality of the Middle Ages in England. For example, the arch can create taller spaces and carry increasingly greater loads allowing for the development of larger windows. Moreover the arch enabled the creation of a renewed mentality defined by lighter spaces, in which God could be glorified in new mediums that inspired awe and wonder. This contrasted with the rather dingy environs of the heavy burdened Norman architecture of post-conquest England.

The physical changes in architectural style and capacity represent something deeper than building innovation. In the throwing off of early Norman architecture at Durham, the people of the North were moving away from the heavy imprint of William the Conqueror’s violent rule and towards a new Anglo-Norman identity. This would see the development of a new society, not just in the North, but across the whole of England in which the Norman ruling elite would slowly become more English than Norman. Evidence of this new identity is most strongly represented, having occurred more slowly in architecture than in regal affairs, when in 1103 (during the building of Durham’s nave) the third Norman King named his son William Ætheling, choosing a name that is part Anglo-Saxon and part Norman for this future King of England.