Days That Shook the Communist World: Hungary Commemorates the Anniversary of the 1956 Revolution 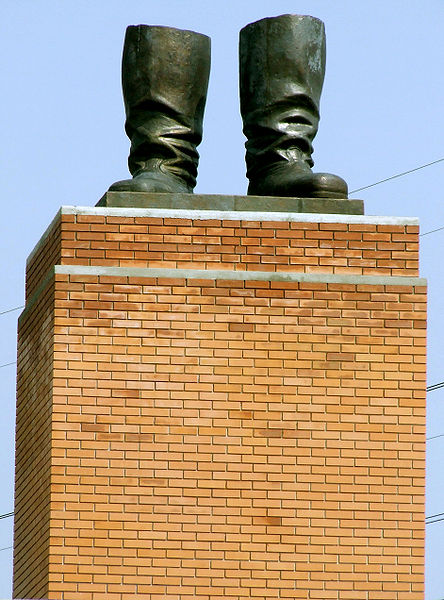 Stalin’s boots: all that remains of the once-imposing statue

In the decades after the Second World War, Moscow was the unchallenged ruler of Hungary and the rest of Eastern Europe. In the rare case of a popular uprising, Soviet forces were sent in to brutally suppress the dissenters into submission. Cases of such resistance in East Germany, for example, are well-documented. In the summer of 1953, the population rebelled against the systematic implementation of the oppressive Aufbau des Sozialismus (Construction of Socialism) programme. This involved the collectivization of agriculture, military conscription and highly unpopular tax increases. In response to the emigration flow of academics and young people – which naturally experienced a dramatic increase – the authorities raised the productivity quota for their remaining workers. The result was the popular uprising of June 1953.

What is perhaps slightly less well-known is the uprising that took place on the streets of Hungary three years later. Fifty-four years ago this month, the people of Hungary gathered on the streets of Budapest to demand political reform and an end to Soviet rule. The uprising began as a group of student demonstrators who were inspired by the actions of similar groups in Poland. Their Polish counterparts had just recently succeeded in getting their deposed leader, Władysław Gomułka, reinstated. The students’ demands were similar: they wanted former liberal Prime Minister, Imre Nagy, returned to power and the immediate withdrawal of Soviet forces from their country.

Initially, the Hungarian authorities tried to smooth over any evidence of popular discontent. The First Secretary of the Hungarian Party, Ernő Gerő, dismissed reports that Hungary was asserting its independence from the USSR as “lies and rumours” on national radio.

It is interesting to note that this attitude is not without precedent. East German officials, for example, repeatedly asserted that theirs was a regime that enjoyed the support of the masses in spite of overwhelming contradictory evidence. Between 1945 and 1961 approximately three and a half million Germans (out of a population of eighteen million) fled the Deutsche Demokratische Republik (GDR) for the West. Republikflucht was a problem that undermined the fledgling economy of the GDR, as well as the grandiose claims of its government. It was clear that many East German citizens were anything but content under the Party’s Stalinist reforms: farmers, doctors and university lecturers, for example, flocked to the West in huge numbers after the State started to encroach on their territories. For GDR officials to claim any kind of popular success was therefore completely absurd.

Corey Ross sums up this argument nicely. He asserts, quite convincingly, that in attempting to gloss over its internal problems the GDR chose to “externalize” issues like Republikflucht, blaming the “sinister” influence of western capitalism rather than unpopular domestic policy for the mass exodus of skilled workers and academics before 1961.

It seems as though both Communist governments were content to remain in a state of denial, even when confronted with overt demonstrations of their populations’ dissatisfaction. However, the citizens of Budapest refused to let their demands go unacknowledged. The crowd marched on the broadcasting station immediately after Gerö finished his statement, forcing the Hungarian Communist Party to reinstate Nagy after an emergency session that same night.

Initially it appeared as though the protesters had won. Nagy was restored to power and the Soviet Union, appalled at Ernő Gerő’s shockingly brutal tactics which killed hundreds on October 25th during a clash in Parliament Square, took swift action and sacked him on the spot. Hungarian civilians were filled with hope as Soviet tanks began to withdraw from the capital five days later.

This hope, however, was short-lived. On 4th November, Nikita Khrushchev sent in more tanks in what turned out to be a ruthless crackdown in which thousands of Hungarians were killed. Eyewitness Tom Leimdorfer told the BBC that “it was clear that the Hungarian Army and freedom fighters were resisting. There was noise of heavy firing, artillery shelling, there were tanks everywhere. A tank came out of our road and immediately fired a volley of shots.”

Prime Minister Imre Nagy fled to the Yugoslav embassy but was captured by Soviet troops. He was eventually executed for high treason in 1958 after a secret trial in Budapest. Around 200,000 Hungarian refugees fled the country.

Although Hungary remained under Soviet control until 1989, some would argue that the failed uprising had lasting and far-reaching effects, namely the construction of the Berlin Wall. Officially, the Wall was an ideological measure built to protect East Berliners from the continued, pernicious influence of the capitalist Federal Republic. Again, this demonstrates just how out of touch the communist authorities really were during this period. The unceasing exodus of Flüchtlinge across the border and the resulting economic strain has led a number of influential historians to the conclusion that the Berlin Wall was built instead as a practical measure. The Wall was the perfect solution for a government fearful of the resurgence of mass protest and at the same time determined to portray a picture of national unity to a sceptical Western audience. Although both uprisings were ultimately put down by the Soviet authorities, it could certainly be argued that these incidents brought about a sense of urgency that eventually led to the closure of the Berlin border. The East German and Hungarian revolts set a precedent for mass demonstration and the Communist leaders would have been eager to demonstrate the extent of their power through concrete measures like the Berlin Wall.

In the same year as the collapse of the Berlin Wall and Communism in Eastern Europe, the body of Imre Nagy was reburied with full honours. Two years later, in December 1991, the former Soviet Union issued an official apology for its actions in 1956. October 23rd has been made into a national holiday and Hungarians across the world commemorate annually the terrible events that took place more than half a century ago. However, when looking back to the 50th anniversary in 2006, it seems that the legacy of the failed revolution is still extremely divisive.

For several decades, the left and right have refused to celebrate the anniversary of the uprising together. This alludes to the deep, bitter divisions between the right and left in the current Hungarian political arena. In 2006, the right-wing opposition refused to attend all events at which the socialist-liberal Prime Minister, Ferenc Gyurcsány, was present. This meant that the opposition benches of parliament were left empty as Gyurcsány and more than twenty world leaders paid their respects to the fallen protesters of 1956.

General Béla Király, commander-in-chief of the revolutionaries in 1956, lamented the lack of national unity in his country before he died last year. In an interview shortly before his death, he told the BBC, “the biggest failure of the present democracy is that instead of bringing the Hungarian nation together… today it is more divided than ever”.

Given the political polarisation of Hungary today, it seems that the rare display of national unity brought about by the events of 1956 is only a proud memory. Yet as the population continues to commemorate the bravery of the fallen protesters in years to come, perhaps the case will come to serve as a precedent for bridges to be built to span the political spectrum.