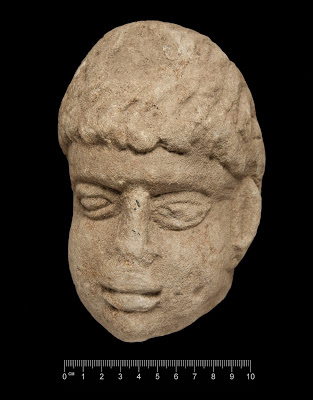 The find of the year – but who does it represent?

This summer saw the completion of the first five-year season of excavation on the Roman fort at Binchester (near Bishop Auckland). Since 2009, this site has been used to train all 1st year students in the Department of Archaeology as well as bringing together students from the US and members of the local community to work on the incredibly well-preserved remains.

The fort itself stands on a gravel bluff at the point where the main Roman road from York crossed the River Wear on its course north towards Hadrian’s Wall. This was the main communication route connecting the military commanders of Northern Britain with the actual northern frontier. Because of its importance a series of forts were constructed along its route, including Binchester. It was initially founded in the AD70s during the first period of Roman advance north, but remained in use until the very final days of Roman power in Britain in the early 5th century and seemingly beyond.

The site has long been known about. In the 18th century antiquarians noted that Binchester was famous for the number of Roman coins collected there and several altars and gravestones had been found by local farmers. However it was only in the 19th century that site came to prominence when the remains of a well remained bath house were discovered when a farmer’s horse fell down a hole that had opened up in one of the fields. This bath house was part of the house of the fort’s commander and soon became a popular visitor attraction. Archaeologists carried out small scale investigations in and around the fort throughout the later 19th and early 20th centuries revealing not only traces of the defences but also showing that the fort was surrounded by a major civilian settlement.

In the late 1980s and early 1990s a major campaign of research began exploring the bath house and the surrounding buildings. These showed clear evidence of extensive Roman occupation and for the first time showed that life on the fort seemed to continue into the early middle ages, with 5th century craft activity continuing before the area was turned over to burial, with a number of Anglo-Saxon graves found inserted into the remains of the building.

Durham University began work at Binchester in 2009. We decided to start this new phase of work for a number of reasons. The visit of Time Team to the site in the mid-2000s was of crucial importance. They began a large-scale geophysical survey which showed for the first time the sheer scale of the fort, particularly exciting was the realisation that an earlier, even larger, fort lay beneath the earthwork ramparts that survive today. The survey also showed that the civilian settlement was extensive and identified a couple of monumental mausolea and a cemetery. It was becoming very clear that the remains at Binchester were of a scale and importance hitherto not appreciated.

We decided to open up two excavation trenches: one in the interior of the fort and one in the civilian settlement. Our Trench 1 lies inside the eastern corner of the defences. The main discovery has been a large late Roman barrack block. As Binchester was a cavalry fort this would have accommodated the soldiers and their mounts, and indeed we have found what appears to have been drainage gullies that would have helped keep the stable areas clean. The barrack itself is built of stone and would have had a stone tiled roof. It clearly went through a number of phases of use and appears to have shifted shape and been rebuilt over time. At one end was a larger compartment that was probably the quarters of an officer. Although we tend today to think of barracks and forts as being primarily masculine areas, the discovery of a baby burial carefully placed against the edge of the building suggests that women and families may also have been living inside the fort. In the late Roman period the entire area around the barrack was spread with dumps of butchery waste, the bones (and presumably other parts) left over from slaughtering cattle to feed the soldiers. We have found evidence for gnawing on bones by both dogs and rats (sometimes on the same bone) which gives us a sense of how much waste was just lying around. The smell of the site can’t have been helped by the presence of substantial Roman latrine which we have uncovered just to the north of the barrack block. This was placed up against the edge of the rampart and had a simple drainage system which channelled rainwater through the building to sluice out the sewage into the fort ditch.

In Trench 2 we opened up an area that faced onto the main Roman road. At one end we have uncovered a couple of simple rectangular buildings that were probably used as shops and they both seemed to have ends that opened up onto the road itself. The most spectacular discovery however has been the incredibly well-preserved remains of what appears to be another bath-house. This structure was partially terraced into the hillside and filled in with massive amounts of Roman rubbish in the later 4th century after it fell out of use. These factors mean that the walls of a sequence of rooms survive to 6–7 feet high and in places the plaster that covered the wall interiors remains in place. In one area this can be seen to be decorated with Roman scratches and doodles. Pleasingly, our new building appears to line up with a circular bath-house discovered in this area in the late 19th century. As a result of our work Binchester is now home to not just one, but two of the best preserved bath houses in Roman Britain.

It was from this area that one of our best finds came this summer. Towards the end of the student’s time on site, Alex Kirton, one of our first year archaeology students discovered a carved stone head that probably represents a Roman god. Based on its style, which brings together elements of Roman classical art with native traditions, it is probably the image of native British god worshipped by the Roman occupants of the site. It has strong parallels with a carved head from a temple to a god called Antenociticus found at Benwell on Hadrian’s Wall, but in the absence of any inscriptions we can never know the name of the Binchester god.

We have now completed five years excavation on the site and we still have much to do. We are hoping though that another two seasons work will allow us to finish off what remains or at least get a fuller sense of the nature of the archaeology in our trenches. After excavation will come the pain staking process of analysis and investigation that will help us better understand the site before it is finally published. Over the summer the site is open to visitors and each year there are numerous public activities and events throughout the year connected with the project. If you want to know more why not follow the project on our blog: http://binchester.blogspot.co.uk/