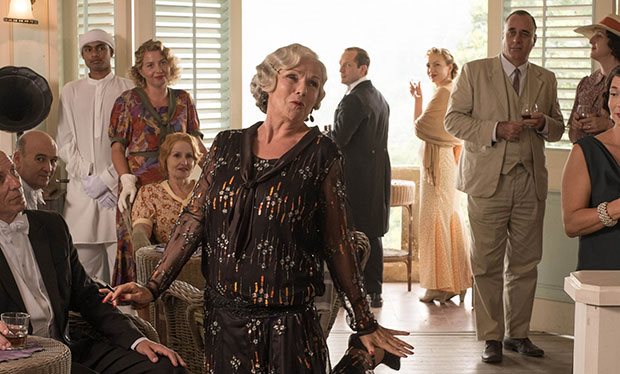 Hopping on the bandwagon slightly late here, I know. But at least well before the much-anticipated second season of Channel 4’s Indian Summers. Mocked by some as ‘subcontinental Downton’, hailed by others as the first mainstream reminder of Britain’s stained imperial legacy, Indian Summers certainly answered the nation’s clamour for a spot of Sunday evening drama. Set during the final days of the British Raj and within the Himalayan foothills of Simla, the ‘summer capital’ of British India, and with a budget of £14 million, it was definitely orientated towards success.

In my view, Indian Summers already has one up on Downton Abbey solely in its address of a gargantuan historical issue, coverage of which has been dangerously lacking in both British media and education: the British Empire. Probably the largest (literally, and influentially) part of our national history and identity. Less than a century old, yet as stale in collective memory as the Ice Age (well, almost). Thank goodness somebody decided to talk about it.

For all its calculated criticisms of colonial wrongdoing, there seems to be something faintly unsettling about Indian Summers that is originally hard to pin down. I finally get there. A sense, admittedly distant, of nostalgia. Romanticism. Of course, there is nothing new in such ideas. We like to romanticise most things that are foreign to us. Exoticism is fashionable, and so is history. Yet this feeling is entirely at odds with the message being broadcasted. Certainly, the British expats are commendably portrayed as ruthless, racist socialites – nothing nostalgic there. This is epitomised most forcefully by the Machiavellian and matriarchal Cynthia Coffin (the lovable Julie Walters to be typecast no more), and in close second place by the rather pitiful Sarah Raworth, whom you almost start feeling sorry for before she goes and says something altogether quite poisonous again. Sympathies emphatically lie with the Indian population in their battle for independence, demonstrated repeatedly through Ralph Whelan and his governmental corruption, the Royal Club’s racist hedonism (no dogs, no Indians…) and, at the series’ climax, the execution of the obviously guiltless Ramu Sood. All this is against a backdrop of rising Indian activism, the shadow of Ghandi, and the smell of future’s freedom – as personified by the fierce Sooni, sister of the increasingly political Aafrin Dalal.

Construction of characters is admirable and reasonably realistic. Cynthia breaks the rich Brit mould with her East London accent and bawdy comments, we feel mixed sentiments for even the most ghastly characters (Ralph in particular), and there is a multitude of formidable female characters that are so often missing from similar period dramas. And after the rather slow first half of the season, the plotline definitely picks up. Sex and scandals are commonplace, and a good bit more explicit than Downton or Parade’s End ever were. Impassioned and outspoken women ardently fight the patriarchal status quo, and there’s a healthy dose of forbidden cross-cultural liaisons. There – all the makings of a good costume drama, right? Except Indian Summers isn’t your run-of-the-mill good costume drama. It’s also a moralising and political piece, and takes place in a country that has a long and controversial history with Britain. As such, it’s a platform both for education and damage.

Let us return to setting. The audience is swept into a world of saturated colour and lush greenery. Heat shimmers off every surface, uncomfortable if it were not for the copious amounts of fresh Indian tea and an ostensively sedentary lifestyle. Beautiful scenery is intensified by fantastic cinematography, capturing wistful shots of which watchers might take note for their next holiday. Ironically, we are actually yearning after George Town, the capital of the Malaysian island of Penang (but we’re not meant to know that!). The opening music – dramatic, atmospheric, and rich in its use of Eastern strings and percussion – immediately transports us through time and space, and we want it to! India, in all its brilliance and beauty, is enthralling for your average Channel 4 viewer, presumably surrounded by the gloom of a very short British summer. The title alone conjures up daydreams of balmy midsummer evenings, the drone of cicadas, and long, starry nights. Could it really have been that bad? Yes, we cry! But Indian Summers would almost have you think otherwise. For a split second, at least.

Perhaps this is unfair. Perhaps the portrayal of such a lavish lifestyle is meant to contrast with the trials and tribulations of the Indians. Indeed, when Aafrin insistently claims (perhaps primarily to himself) that the British have come to rule, his often-overlooked younger sister disagrees: ‘they are here to dance and forget’. Indian Summers manifestly aims to publicise a clash of cultures between disparate worlds, connected almost only by Aafrin, who flicks constantly between the two – both geographically and in allegiance. However, the undeniable aesthetics of life in Simla offer viewers a confusing paradox – whilst we condemn the actions of the mostly deplorable British expats, we also envy them. It is this deeply concealed sense of nostalgia that heightens our twenty-first century proximity to empire.

Indian Summers’ reflections on colonial Britain are more than mere tokenism. I genuinely think it has made a constructive difference in how empire is presented in the public sphere – thankfully a move away from Channel 4’s previously aired imperial ventures, namely Niall Ferguson’s rather Eurocentric Civilisation: Is the West History? However, like many commercial enterprises dealing with sensitive topics, Indian Summers runs the risk of perpetuating a relationship that built its foundations on uneven ground, not so very long ago. Let’s hope season two charms us a little less.