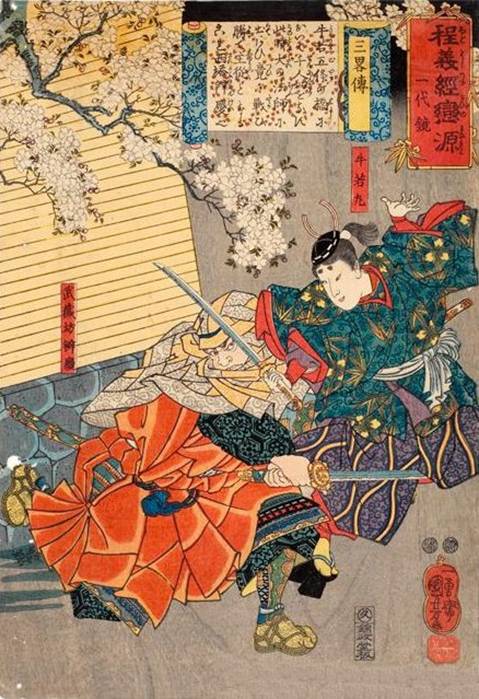 The legendary fight between Benkei and Yoshitsune

With history being as incredibly diverse a topic as it is, it should not be a surprise that there are so many historical figures that have faded into outright obscurity, unnoticed by the majority of the populace. However, many of these characters are simply fascinating, and it seems to me a shame that some of them should continue to be ignored; especially when their exploits can make for good reading material.

There is perhaps no clearer an example than Benkei. Certainly one would be hard pressed to find someone whose story is quite as amusing either. This is a man whose story is perhaps mingled with myth and folktale, but, regardless of the authenticity of his deeds, it cannot be denied that he is utterly captivating.

Before we get into his story though, a little background information might be helpful. It would be rather impossible to look at Benkei alone, considering how little we actually know of him. As some might be familiar with, early medieval Japan was not perhaps the most stable of environments. The Genpei War, in itself something of a little known period, threw the country into a brutal war for supremacy between the two dominant clans: the Taira and the Minamoto. Most of what we know of this period comes from the Tale of the Heike – suffice it to say, this ‘tale’ is often full of various embellishments and fable-like qualities.

One of the most notable heroes of this period, as portrayed by the ‘tale’ at least, is Minamoto Yoshitsune. At the forefront of the Minamoto campaigns in the later years of the war, Yoshitsune is often credited as a great leader and warrior, being one of the few in Japanese history to have earned the honor of being known as a kensei, literally meaning ‘sword-saint’. As a result, he is perhaps one of the most acclaimed swordsmen in all of history.

However, the man himself is somewhat obfuscated by legends. In this sense he could perhaps be regarded as something of a Robin Hood in Japanese folklore; a masterful warrior, often known for wandering the wild, with his own merry little band of associates. And this is where Benkei comes in, for, if indeed Yoshitsune is Robin Hood, then Benkei is both his Little John and Friar Tuck.

According to the most popular variant of the legends, Benkei was a massive man, famous for his bloodshot eyes and superhuman strength. In some of the stories he is depicted as wielding a tetsubo, which, simply said, is an absolutely massive, spiked iron club that was used to crush bones and smash the opponent’s armors. Humorously, these weapons were said to have been used by demons, as they were the only ones who could actually manage to lift them. Others have often depicted him wielding the deadly naginata, a pole-arm, which seems a little more likely. Purportedly, he was also one of the sohei, a class of warrior monks that were renowned for their martial prowess and were particularly prominent in this period.

The story goes that Benkei stationed himself in Kyoto, guarding a bridge as part of some religious vow, relieving any travelers of their swords with the sole intention of retiring to a monastery with a thousand swords; and so it is therefore implied that he fought and defeated a good deal of those travelers as a result. Though there are various different tales as to what happened when Yoshitsune was making his way across the bridge, all the stories agree that it was Yoshitsune, and him alone, that bested Benkei, leaving the awestruck monk to pledge an oath of allegiance to the youth.

Thus their adventures started, with Benkei remaining Yoshitsune’s loyal companion for many years, aiding him in his struggles against the Taira clan. Indeed, even after the war, when Yoshitsune is beset by even greater adversities, the adventures do not come to an end; Benkei’s pledge was truly for life. There are various different stories than one can find, with some perhaps more farfetched than others, but at the very least they would make for a very interesting read.

My personal favorite, though, remains the tragic end to their tale, if only for the sheer grit that Benkei displays. After the end of the war, Yoshitsune is banished by his half-brother, who took control of the country in the name of the Minamoto, prompting the legendary war hero to flee to the presumed safety of the north of Japan. Most of his followers abandoned him, save for Benkei and a loyal few.

According to the legends, they all seek refuge, only to be betrayed and surrounded by a group of local samurai loyal to the enemy. Overwhelmed, Yoshitsune retired to his chambers to commit seppuku, as was customary, while the rest of his men, Benkei included, remained outside to fend off the attackers. Dozens and dozens attacked, and eventually all save the monk himself fell. Using his naginata to his advantage, Benkei held a choke point, fighting off his opponents one at a time.

After hours of fighting, the samurai looked onwards with a sense of horror as they saw Benkei still standing, leaning upon the pole of his naginata, arrows covering his armor, ready to strike any foe that would approach him. None dared. However, a passing breeze knocks the titan over, providing a startling realization; Benkei had already died, only held up by his armor. Even in death, he did not fail his lord.

Rather obviously, it is hard to say just how much of any of this is true, but to me that is beside the point. Benkei embodies the traditional Japanese values of the loyal follower, of the warrior who values honor more than anything else. It is for this reason that he is so attractive to Japanese folklore and kabuki plays. Certainly those same values, coupled with the sheer awesomeness of the man, have made Benkei endearing to me.

If you are interested in reading up on the Genpei War and Japanese medieval history in general, I strongly recommend taking a look at Jonathan Clements’ wonderful A Brief History of the Samurai: A New History of the Warrior Elite.