An Interview to Treasure 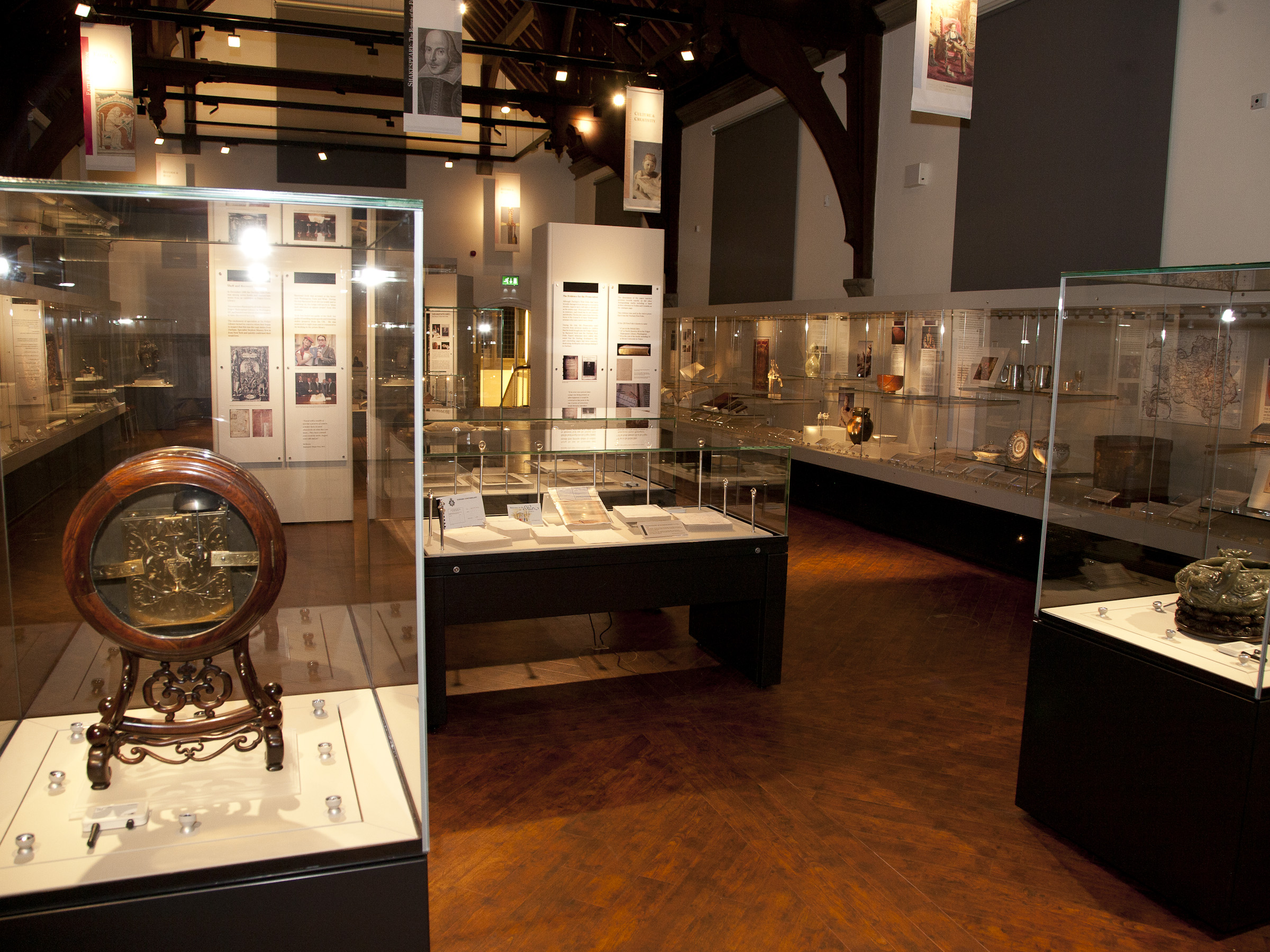 Hélène Feest and Sarah Ingrams met up with Julie Biddlecombe-Brown to talk about the newly-opened Treasures of Durham University exhibition at Palace Green Library.

SI: Hi Julie and thank you very much for talking to us about the exhibition. Would you tell us a little bit about your role and involvement?

JBB: I’ve been employed by the University since the beginning of June last year as the Exhibitions Officer and so my role was to turn the ideas that people had for exhibitions into a reality. This involves all of the co-ordination, deciding on which objects, working out how we would present them to the public and then starting to look at the future programme of the gallery. It’s a really varied role.

HF: How many other people are involved in this project?

JBB: It varies really depending on what stage of the project we’re at. A lot of people have been involved in creating this particular exhibition because it’s drawing from collections right across the University. Members of staff from the Durham University museums (the Oriental Museum and the Fulling Mill), the curator at Castle and members of staff here at Palace Green Library have been involved. We’ve also had volunteers so it really has been a massive team effort.

SI: It’s a huge project. Is there a unifying theme of the exhibition; how did you go about selecting what should be in there?

JBB: That was the most difficult thing: I’ve been working in a museum since 1995 and this is one of the hardest exhibitions I’ve ever worked on. Often an exhibition has a particular story line, like the Shakespeare Spotlight, but with this one there had been a decision that the first exhibition would highlight some of the fabulous treasures that there are in the University’s collections. These items are so different and disparate that there’s no one story. They’re all chosen for very different reasons: it might be because they’re rare, it might be because they’re beautiful, it might be because they were owned by someone in particular. So what I did was talk to the people who had worked on the Treasures books for the University and the Castle museum book about what items should go in. I tried to look at how you could break that down into themes and even then it was very difficult.

SI: Besides local history, what other themes is the exhibition divided into?

JBB: We’ve got Culture and Creativity, Faith and Religion, Science and Exploration and then the final one relates to political organisations both in this country and abroad. We’ve got, for example, the Grey papers. One Grey was Prime Minister, another was Secretary for the Colonies and then they were huge land owners in Northumberland. Items from the Grey papers are next to items from Imperial China and the Sudan Archive. We’ve got items that belonged to Ali Dinar, who was the last Sultan of Sudan, but then also we’ve got a flag from the White Flag League which was a nationalist movement within the Sudan. We’ve called this section Reform and Rule but we went through so many titles because we didn’t want to be placing any kind of judgement on whether any of these things were right or wrong; the objects relate to people who had been in a position of authority and governance or people who had campaigned for better representation or political rights. 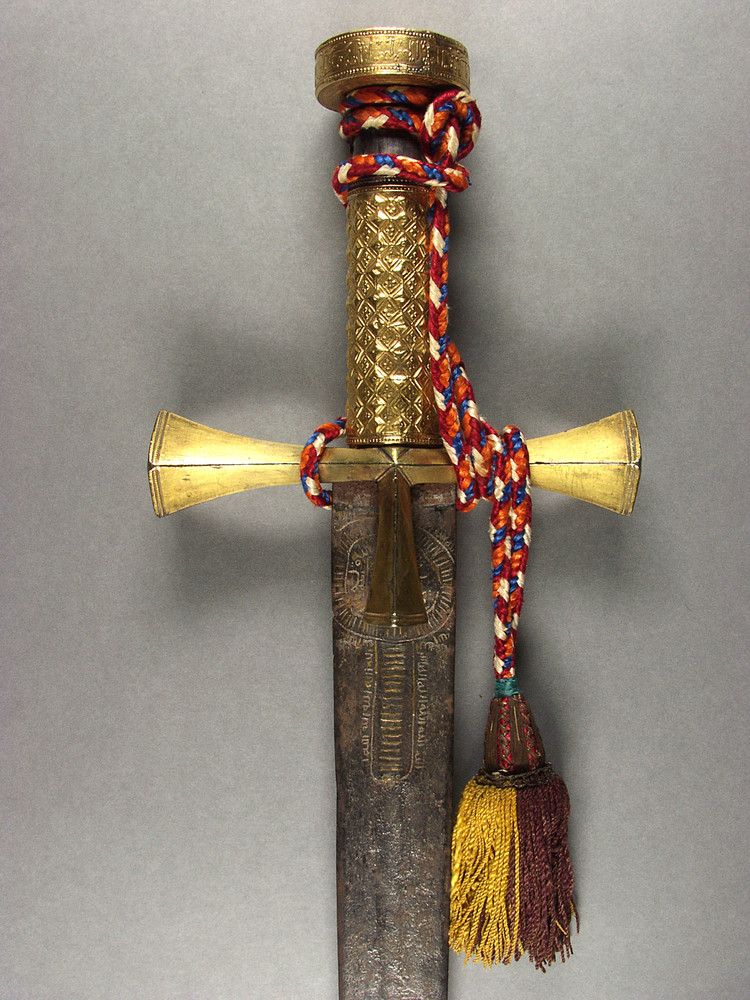 The Sword of Ali Dinar, Last Sultan of Sudan

HF: Considering the subject matter, does the exhibition cater for visitors of all ages?

JBB: This exhibition has been designed more for an adult audience rather than an audience of children. The writing level we’ve tried to do for about age twelve but we haven’t done the child-friendly interpretation because most of the school visits that we have will be facilitated by a person and it’s their expertise that will actually bring that whole thing alive. We’ll be changing exhibitions here so we might have something that’s geared towards a child audience or a family audience for a future exhibition.

HF: What’s the process for writing the explanations of everything; who decides what goes in and how things are presented?

JBB: I gathered an awful lot of information from previous captions, catalogue entries, the museum’s documentation, the library’s documentation and the Treasures books and then edited it down. What we wanted to show was why something was special and why it was a treasure.

SI: It’s a huge wealth of material that has been condensed.

JBB: Précis is the greatest gift for anyone who works on writing those sort of captions. I find it really difficult but you just have to keep working and suddenly you get what you have to do. You might start with 500 words that you’re getting down to 50. I was very concerned here that we weren’t providing enough information in those captions but actually the feedback from visitors has been that they’re really pleased with the amount that’s in there.

SI: There’s quite a lot of focus on the people who collected these objects as well as on the objects themselves – was there a decision to focus on the collectors?

JBB: Our collections on the whole wouldn’t be here if it hadn’t been for the people who have gathered them together; from Bishop Cosin, who founded the library here, right the way through to the early nineties. There are so many reasons why we have the fabulous things and it’s largely down to the generosity of people who have given. I think it’s really nice to be able to recognise that in the context of an exhibition.

HF: There’s a recent trend in museums of using displays to explain some of the behind the scenes work. Do you think this is an important development?

JBB: Yes. The Wolfson Gallery is just part of a planned phase development and we’re hoping, in a later stage, to get a larger conservation laboratory. Outside that, we’re planning to have a small display that outlines the work the conservators do. We’ve currently got a studio here with three full-time conservators: the exhibition wouldn’t be there without them. They’ve made all the book mounts which are made to take a particular book, open on a particular page. They’re a real triumph. It’s also their responsibility to make sure the collections are well looked after. They’ll rebind the First Folio when that comes off display. They’re an incredible team and we want to highlight their work.

SI: Would you be able to tell us a bit more about how some of the objects are conserved; are they kept in specific conditions in the show cases?

JBB: Yes. Some of the cases are more brightly lit than others. We used a light meter and adjusted all the little heads to make sure that we got exactly the right lighting levels on each object. Some things, like the textiles that are very delicate, can be lit at a low level but then something like the carved jade boulder, which can take an awful lot of light being bounced off it, can be lit to look like a real showstopper. Each of those showcases is also a sealed environment inside so it won’t fluctuate with the humidity and temperature and we’ve got loggers in all of these to make sure we keep it as stable as possible. There’s a silica gel tray to make sure any excess moisture is drawn out of the atmosphere within the cases so each one is a little microclimate. We have to make sure that by exhibiting these objects we’re not actually causing them any damage.

SI: How long can we expect some of the fragile items to be in there?

JBB: Some for as little as three months, then they’re rested and then they might come out again. It’s really essential that we work closely with the conservation team because we need to make sure that by showing these things to the public we’re not causing them to be damaged so that people in a hundred years time won’t have them to see.

HF: I think there is something quite emotional about the idea of this fight against decay.

JBB: Everything has a natural lifespan, absolutely everything, but these things, through care, can be kept for so much longer and that’s what we want to do, that’s what museums and galleries are all about, preserving things for the future without hiding them. It’s a real balance. 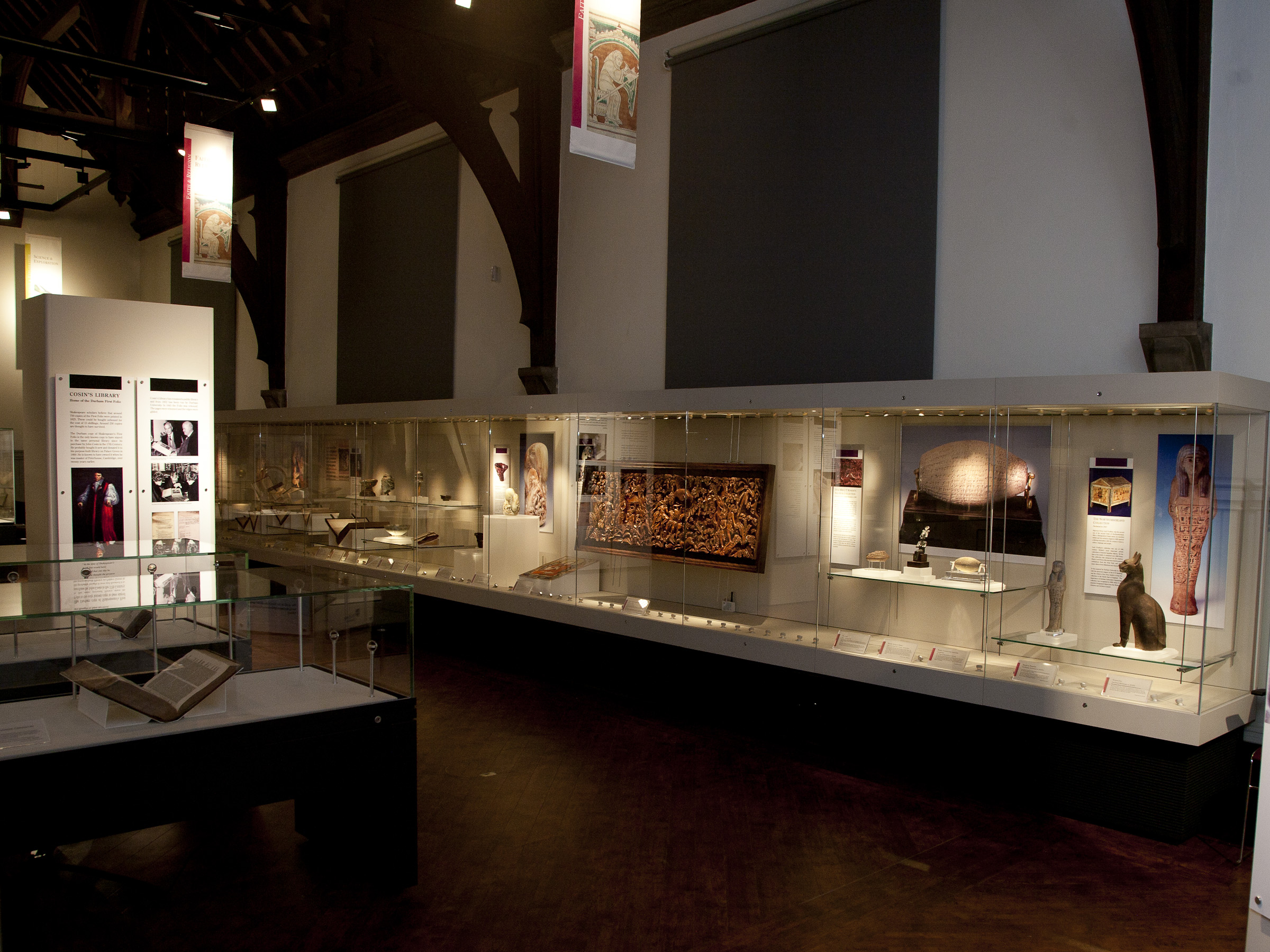 SI: Have you got a favourite object in the collection and would you like to tell us a little bit about it?

JBB: When we were setting up, we all talked about what our favourite things were and I’ve got loads of favourites. Before we started setting up there were some of the science books that I thought were amazing though I’m not a scientist. I’m a big Dickens fan so the fact we’ve got a first edition Oliver Twist is fabulous but my absolute favourite, if it was a take-home item, is the Tang Dynasty horse figure.

SI: Can you describe that to us?

JBB: It’s a ceramic horse from the late seventh or early eighth century that would have gone into the tomb as a representation of a horse. It looked beautiful in the Oriental Museum on display but it was in a smaller showcase with a number of other similar items. When we put it into the showcase here and turned the lights on it, something just happened and a few of us went “that’s just glorious”. And it is a beautiful, beautiful piece.

SI: So taking it out of the Oriental Museum and putting it on its own shows it to advantage. 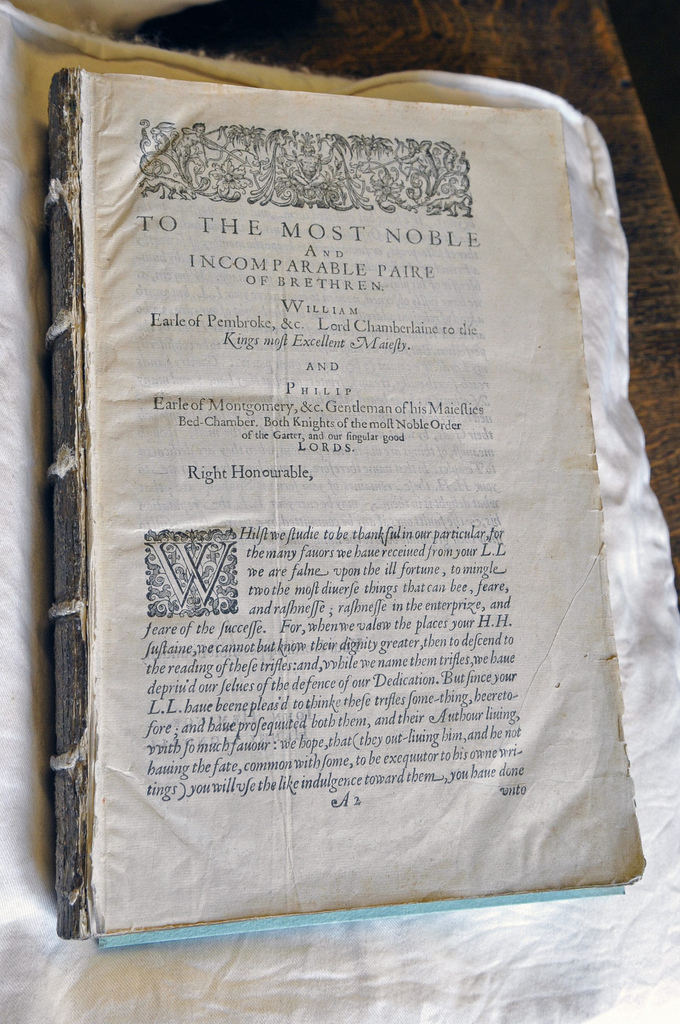 SI: Altogether it looks fantastic. At the moment the focus is on Shakespeare’s First Folio but what else is there to look forward to in the Spotlight Series?

JBB: We hold the archive for Sir John Stainer, who was a Victorian composer and musicologist, and was instrumental – instrumental sounds like a terrible pun, it wasn’t meant to be – in setting up the music degree in Durham. He was a music professor at Oxford and organist at St. Paul’s Cathedral. Professor Jeremy Dibble in the Music Department here is his biographer so he knows the Stainer archive really well. He’s guest-curating that exhibition, along with a massive programme of concerts of Stainer’s music and evensongs using Steiner’s church music.

After that we’ve got an exhibition about Thomas Wright, a little-known County Durham hero from Byers Green. Whatever he turned his attention to he did wonderful things with. He made scientific equipment, he was an astronomer who helped our understanding of the Milky Way and he designed the minarets on Durham Cathedral. There have been exhibitions about him here in the past and people have always been very interested in him as a local figure who had an extraordinary life of achievement.

We’ll also be looking in the next stage at a small permanent gallery dedicated to the history of the book, showing how books have evolved from the earliest manuscript to the i-book now.

SI: So will the museum extend to fill the space downstairs?

JBB: The gallery upstairs will probably stay on more of a treasures theme and we’ll use its central space to have music recitals and talks. Downstairs will be regularly-changing temporary exhibitions, some of them brought in from other organisations, some of them curated in house. What we’re exhibiting could be totally varied from dinosaurs to Degas.