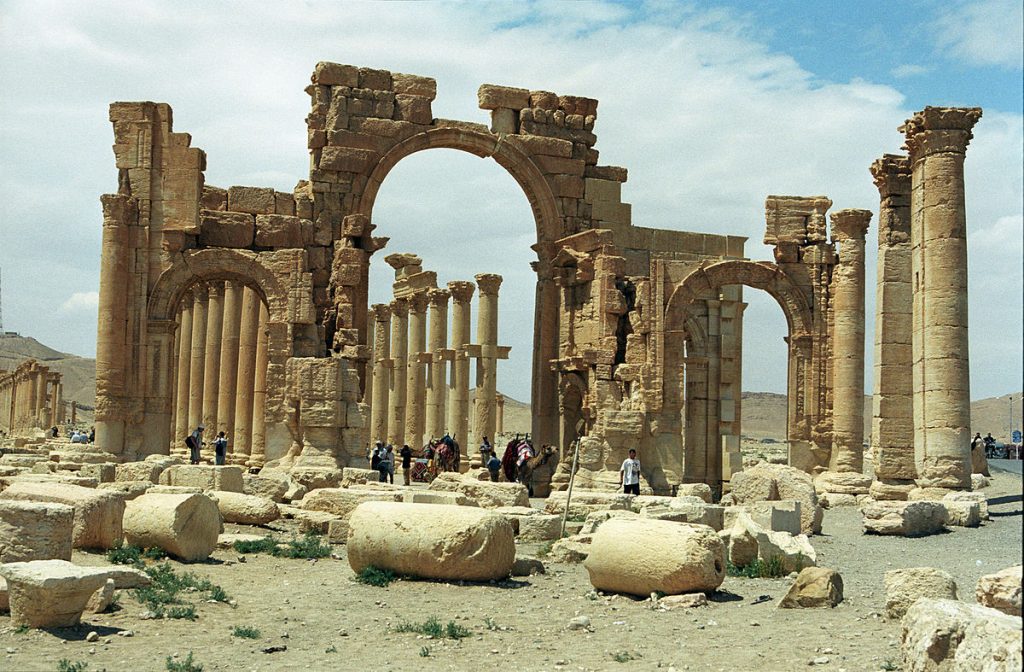 The Arch of Triumph in the eastern section of Palmyra’s colonnade. It was destroyed by IS forces in 2015.

Last month, Russian-backed Syrian forces recaptured Palmyra from Islamic State, in what Syrian President Assad called ‘an important achievement in the war on terrorism’. He is not the only one who has drawn attention to the ancient city’s liberation. The director of the Russian Hermitage Museum, Mikhail Piotrovsky, declared that there would be nothing ‘more beautiful in the annals of Russian history in the Middle East’ than Russia’s role in the emancipation of Palmyra from IS forces. Their responses to this symbolic victory are certainly justified; the recapture of Palmyra is both a blow to IS and a historical feat for those concerned with the rampant historical destruction of Syria. Unfortunately, in the West, this is only the beginning of a much larger dispute.

Since the liberation, archaeologists have flooded into the site, many with the conviction that it must be rebuilt. Why? According to Syrian director of Antiquities, Maamoun Abdelkarim, a challenge must be issued to international terrorism, that ‘you cannot erase our history, and we will not sit idle and weep over the ruins’. Here, the war is not simply a fight against IS, but also a stand against using the destruction of what is most vulnerable and precious as a tool of conflict. Simon Jenkins, writing for the Guardian, defended the proposal to rebuild the site: ‘this is a world that dates from the earliest eras of classical, Christian and Muslim cultures. It is everyone’s heritage’. This leaves an abundance of questions unanswered, but heritage is at the centre – is Palmyra the West’s heritage? Does this make it our duty to rebuild it? Is heritage only relevant if it is tangible?

My answer is no, to all of these. Palmyra is not disconnected from Western history, certainly, and its damage is felt worldwide – but the fact is that had it not been captured by Islamic State force, it would be just another one of the many rich historical landmarks of the Middle East. If we have a duty to rebuild Palmyra, then what else should we have a duty to recapture from the vestiges of the past? The annihilation Europe has wrought on the world has taken many less fine forms than the destruction of ancient buildings – the remnants of British, French and Dutch colonisation still blot landscapes all over the world. 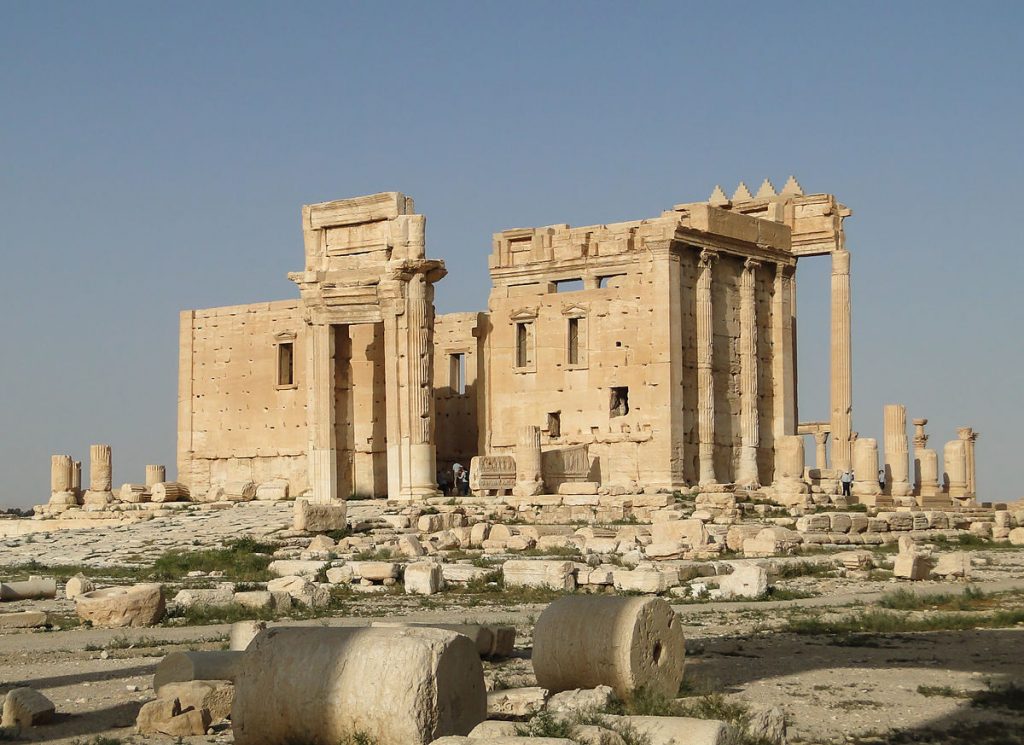 The Cella of the Temple of Bel which was destroyed in 2015.

John Curtis, former British Museum expert, has stressed the importance of rebuilding Palmyra – he argues that we should not attempt to rebuild everything in history, but that Palmyra, because it suffered ‘overnight destruction’ should be repaired. This argument seems to me to be entirely subjective; if we accept Curtis’ loose chronological framework, we assume that Palmyra should be rebuilt because the destruction happened in our own times. Yet, even still working inside Curtis’ timeframe, ‘tomorrow’, Palmyra, as it stands now, will be history. Is the story of the past (all of the past) not the most interesting part of examining ancient ruins? And if not the most interesting, surely of equal importance; the rebuilding of Palmyra, purportedly so that ‘the children of Syria and the world [can] visit the site of Baalshamin and Bel and the victory arch’, simply ignores the relevance of the recent. We can look at Palmyra as it exists today as a site which stood for multiculturalism and tolerance, which, though it has degraded naturally and unnaturally, still exists, less so in reality than in photos taken in recent years, but one that exists nevertheless. It has not been bombed into extinction.

Rebuilding Palmyra will not counteract the destruction done to it. Of course, technological advances mean that the ruins would look just as they did before, but if we have the technology to rebuild Palmyra to exact specifications, there are other ways to preserve its ancient form. Palmyra is not so symbolic because it has been untouched by history – it is the very fact that it has been touched, affected, moved by the transition from ancient to modern that makes it such a significant artefact. We cannot ignore recent history in favour of remembering the ancient world. Sadly, the destructive nature of ISIS is now an integral part of the Palmyra’s history. Ignoring this will not make them any less powerful. Our better path is to recognise the symbolism of Palmyra now, instead of rushing to reconfigure Palmyra as it was then.

The role of the West in the Palmyra debate is another problem. It is true, of course, that many Syrian cultural officials have expressed a hope that the site can be restored. But the archaeologists who have expressed an interest in rebuilding the ancient city come largely from Italy and Britain, while the military forces on the ground in Syria come from Russia. Jenkins sees the most pregnant problem as the potential ‘inability on the part of so many enthusiasts to work together, and an obtuse academic dismissal of a technology that can release to the world a new delight in the past’. But does Palmyra belong to ‘the world’ or does it belong to Syria? We cannot simply take possession of Palmyra; to do so would be arrogant, to say the least.

Robert Bevan reported only last week that Oxford’s Institute of Digital Archaeology, helmed by Roger Michel, has begun the process of creating a 3D digital model of the Triumphal Arch. It will then be built of Egyptian sandstone that has been laser-cut in a Tuscan quarry. The Arch will, according to Michel, subsequently be unveiled in Trafalgar Square, then exhibited briefly in New York and Dubai, before being moved to Palmyra later in the year. Perhaps it is this which represents the central issue with westernising the future of Palmyra – the rebuilding of the Arch becomes a victory for those who live in the West. Why should the Arch be shown in London or New York? If we purport to show the Arch as a triumph for the West against ISIS, we have our priorities confused – the triumph for the West against ISIS will only come when their power is stripped. Until then, we would do well not to focus on the material elements of history, but on the lessons we can learn from the past, ancient and modern. 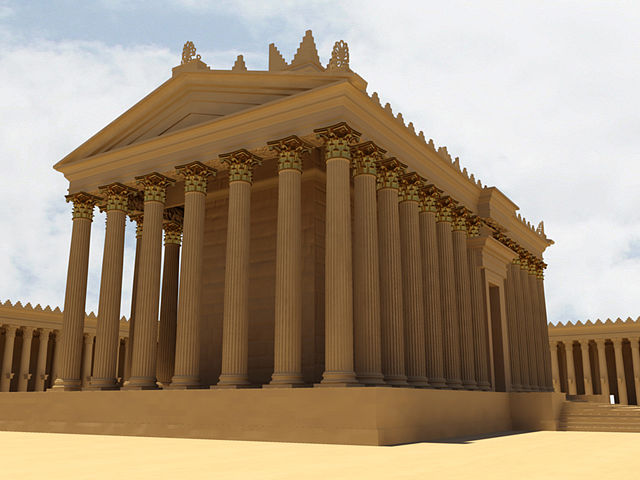 A digital reconstruction of the Temple of Bel from the New Palmyra project.

Forget the fact that rebuilding history seems to place the modern world far above our status, as people who can change the past; why are we so hesitant to accept the reality of modern history? When so much of world history is routinely concealed by (often Western) forces (look no further than the Vichy regime in France or the crimes of the British Empire), Palmyra offers an unfortunate opportunity to accept the reality of the past, and learn from it too. Palmyra is now imprinted with the ‘other’ side of history – the side that we like to forget, to draw over, to wish and pretend never happened. We would do well to change that, and we now have a chance to. Ultimately, as Bevan concludes, if we fake our history, how can we ever learn from it?