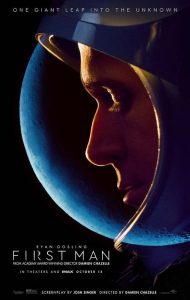 We are guaranteed to get a “mission in space” film at least once a year. Think of 2013’s visual masterpiece Gravity, 2014’s epic Interstellar, 2015’s fan favourite The Martian, 2016’s Spaceship-Romeo-and-Juliet Passengers or last year’s horror film Life. These films differ in genre, quality and realism but they all share the common fascination with the unknown “final frontier” and its dangers, potential and our place in it. However, interestingly up to this point there was no depiction of the most famous time humans actually managed to beat all the odds to make a “giant leap for mankind” by landing on the Moon in 1969. As we reached the expedition’s 50th anniversary it fell on Whiplash and La La Land director Damien Chazelle to adapt one of humanity’s finest achievement to the silver screen, and he made a film that is worthy of the landing’s commemoration.

At the height of the Cold War the United States was losing the space race against the Soviet Union. It was the Russians who sent the first man to space and the first to take a picture of the lunar surface. The Americans had to offer something huge to demonstrate their scientific capabilities. Enter Neil Armstrong who is desperate to escape to his work from a family tragedy that will haunt him throughout all the years he is preparing for the mission. 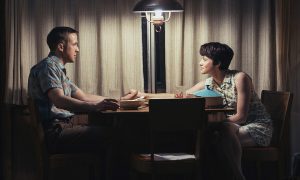 Chazelle knows Ryan Gosling well after having directed him already in La La Land, thus there’s no surprise in him taking the leading role. His portrayal of Armstrong is somewhat reserved. The astronaut does not give away too much from his personality, but that is fine given his status as a cult hero. Everyone can project his own picture of an icon on Gosling’s face who at the same time manages to deliver us a man who’s trying to escape from the death of his daughter by fully focusing on his work and who is absolutely determined to reach this goal.

As good as Goslin’s performance is he is outshone by The Crown’s Claire Foy as Karen Armstrong who while her husband is on his important mission, has an equally important and perhaps even more difficult task; keeping her broken family together. Foy while perfectly nailing the American accent also delivers a captivating performance. The script allows her to star as the film not only focuses on Armstrong’s adventure in space but also shows what the gender roles of the 1960s would have looked like when performed ideally. While her husband is obsessed with his job slightly neglecting his family, Janet’s struggles are to keep this troubled family together both to ensure the success of Neil and to remind him not to forget his duties as a father. Something which the astronaut finds even more challenging than landing on the Moon. Without her efforts it would have been impossible for Armstrong to complete his mission. Thus, the film allows us to celebrate not only one but two heroes in the end who reached perfection at their respective roles in a 1960s American society, thus resulting in the era’s most important technological achievement. 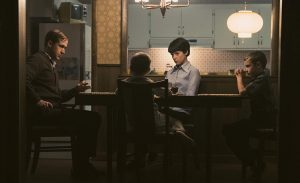 Janet Armstrong (Claire Foy) at the centre of the family in ‘First Man’ (Source: https://www.imdb.com/title/tt1213641/mediaindex?page=1&ref_=ttmi_mi_sm)

Director Damien Chazelle and screenwriter Josh Singer not only showed the triumph of mighty heroes. They managed to tell the human story behind Armstrong reaching the Moon which culminates very emotionally in one of the film’s final scenes. That being said the script is not perfect. In its first act the film is rather slow, especially with some of the training montages. Its treatment of characters other than the Armstrongs is also one of its weaker points. Given the sacrifices of some of the supporting characters it would be expected of the viewer to feel for them, however there is not enough time to get invested in these characters. The film’s treatment of Buzz Aldrin is also questionable as somewhat of an antagonist given he was the second man on the Moon, stepping on its surface literally a few seconds after Armstrong did, and the cooperation and training required by both of them for the mission to be successful. 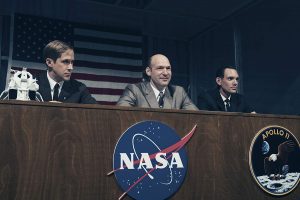 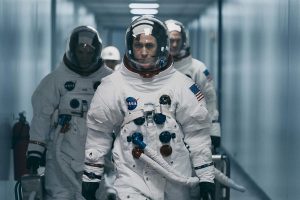 Damien Chazelle did something exceptional with First Man; the film managed to stay both epic and intimate at the same time. It tells a story of two heroes, Neil and Janet Armstrong, which will leave the viewer feel exactly how the first man on the Moon must have felt while making his small step. Extremely tiny, and exceptionally relevant at the same time.