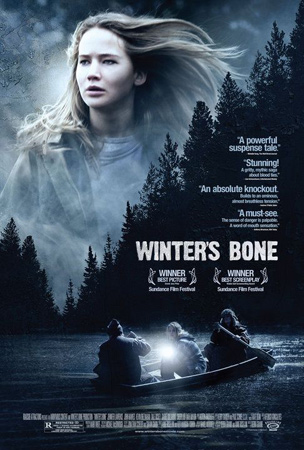 Winter’s Bone is as bleak as the wintry Missouri woods in which it is set, exposing the triple ravages of poverty, violence, and crystal meth that have decimated the American South in recent years. Seventeen year old Ree Dolly is searching for her father in this desolate modern wasteland; on trial for cooking meth, this illustrious figure has skipped a crucial court attendance, having recklessly put up his family’s house and land as his bond. Ree, who has dreams of joining the army, is the sole carer for a mentally ill mother and two small siblings; she realises that they will lose everything if she cannot find her father and force him to attend his trial.

The audience is immediately made aware of the acute poverty of the social situation portrayed in Winter’s Bone. In a hauntingly grim irony the younger children appear to have named all of their pets after treats: things that are unattainable in this deprived existence – Cupcake and Peanut Butter. Ree can barely feed the family and they are supplemented by the grudging generosity of their community. Watching the neighbours butcher a deer, Ree tells her brother, “Don’t ask for what ought to be offered”. This pertinent sentiment gives the viewer a stark insight into the strange code that seems to operate between the people of Ree’s community. In the search for her father, Ree encounters wall after wall of silence and thinly veiled if ambiguous threats, but she continues with a resolve and stoicism that elicit a begrudging respect from those who want her to forget the struggle she has undertaken. Steeped in blood ties, loyalties, and shady dealings that one can only begin to fathom, this film provides a haunting glimpse into a world ravaged by economic destitution, violence, and fear; a world that is for the most part, far removed from our own tangible notions of reality.

A reviewer for the New York Post has derided this film as “poverty porno”, a description which is almost certainly not warranted. Although, this accusation does bring up an interesting set of questions: is this genre of film, a genre which includes last year’s Precious and the Oscar winner Slumdog Millionaire, simply a voyeuristic way for the middle and upper classes to safely view poverty and pretend to have experienced that life and understood its problems? We watch films and read books in order to peek through an illicit window into another world, but at what point does this representation of someone else’s experience and misfortune become an exploitative use of the life of the “other” in modern society? Where do we draw that line? Can we, in good conscience, watch a film which depicts a group of people who will never watch the film? The irony implicit here is remarkably telling. Indeed, the typical ending to this type of film invariably leaves the audience feeling hopeful, even though there is the unspoken acknowledgment that these characters will never really escape the poverty and social system they are struggling against, and that it is very much a permanent part of their daily landscape. If the film does, however, end with a trace of hope, then perhaps we can leave the cinema and not lose sleep over the inequalities of the world.

This potentially optimistic ending does not ultimately devalue the film. It is an achievement in well paced and touching film-making, awash with grays and browns, yet equally drab and harsh as its underlying reality. This poignant sense of beauty laced with subtle tragedy is brilliantly encapsulated in one particularly gruesome scene, where the audience comes to realise that this is a point of no return, a line that once crossed will tie Ree to the community and this futile struggle for the rest of her life. It is this implication, grimly heightened by her own knowledge that she never had a choice, which makes Winter’s Bone such a moving study in modern American life.