Will The Justice League Ever Assemble? 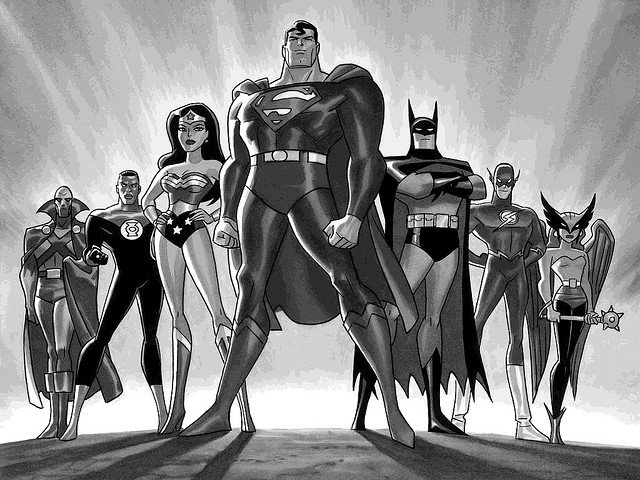 The other ultimate crime-fighting team – but will they ever make it to the big screen?

It is a truth universally acknowledged that a comic book character in possession of a solid fanbase must be in want of a screenplay. Frankly, it’s starting to grate a little: the only films being greenlit in Hollywood right now are either sequels or adaptations, and original screenplays are only approved if producers detect Oscar potential. It doesn’t mean there are no good films being made, of course, but they’re all starting to feel a bit similar.

The notable exception to this rule lies with Marvel. Avengers Assemble became the third highest grossing film of all time, and although its cast, characters and hype had just about guaranteed its success from the day it was announced, the chances are it wouldn’t have scored so many repeat viewings if it hadn’t been one of the funniest, most action-packed and sharply-written films of recent times. Despite the varying quality of the films which built up to it (consider Iron Man alongside Captain America, for example), director Joss Whedon managed to turn in the best comic book film never to star Christian Bale or Christopher Reeve. In building this universe of crossovers, Marvel redesigned the franchise business model.

It’s tempting to say that the bug is catching, but the fact is there has been a similar idea bouncing around Development Hell for several years. DC, or The Other Daddies of Comic Books, have been struggling with the concept of a Justice League film – think Avengers, but with Superman, Batman, Wonder Woman, Green Lantern, Aquaman, the Flash and whoever else is free at the time – and with Marvel proving that ensemble superhero films can be done, the green light is finally flashing.

It makes sense to think about doing Justice League now: we know the model works, and technological developments including performance capture, 3D, CGI and even the increased frame rates being used by Peter Jackson in the Hobbit trilogy mean there’s unprecedented scope for spectacle. But there are plenty of obstacles to a DC ensemble film, and some of them might be insurmountable.

To start with, look at the characters. Superman shouldn’t be an issue – Zack Snyder’s Man of Steel is due for release next year, and he openly acknowledges the relationship between his film and Justice League. It could perform the same function as Captain America: The First Avenger. Green Lantern, however, is more complex. The Ryan Reynolds film version didn’t completely bomb, but it was critically panned. As in, a Rotten Tomatoes rating of 26% kind of bad. It’s not the most well-known of properties anyway, so it’s unlikely the character would draw a huge audience; either way, the question remains of whether Reynolds would want to return, if the original is still canon or if a reboot is required for the new plot to work.

Then there’s Wonder Woman and The Flash, both major players in the DC universe with huge fanbases but no prior screen outings. Both have been mooted, and at one point (thankfully idle) speculation was rife that Megan Fox was in talks to play Wonder Woman, but neither has come to fruition thus far. Given the fact that neither has the simplest of origin stories, the writers would have to figure out a way to contextualise both characters without obstructing a self-contained action plot. Plus, as any comic fan will tell you, Aquaman is rubbish.

And, of course, Batman. You may have missed those three little films which slipped under the radar over the last few years, but Batman’s sort of been done. Sorted. Finito. How do you come back from that? Rumours suggest that Joseph Gordon-Levitt might be asked to reprise his role from The Dark Knight Rises as a kind of Batman Mark II, but the overlap still causes problems in itself. Christopher Nolan’s Gotham City doesn’t fit with the kind of tone Justice League would need: the “what if this was real?” approach couldn’t work. The only alternative is a reboot, and who is going to follow Bale and Nolan? One day, Batman will be redone – that’s sadly inevitable – but with people joking about the speed with which Spider-Man has been rebooted, a projected release date of 2015 is far, far too soon.

Yes, 2015. Therein lies another major issue, since that’s also the year set for Avengers 2. Avengers Assemble and The Dark Knight Rises were separated by a few months this year, and blockbusters generally like to stay out of each other’s way for the sake of the box office figures, but having both ensembles in the same year will make the comparisons even less avoidable.

Take the villains. As the mid-credits Easter egg in Avengers suggested, the sequel is likely to feature the titan Thanos. Interestingly, Thanos was based on one of DC’s New Gods characters, namely Darkseid – who just happens to be one of the most powerful figures in the DC universe and the rumoured villain of Justice League. They look almost exactly the same, and despite the chain of cause and effect in the development of the two, Marvel’s established cinematic presence will ensure that DC are seen to be copying their rival, at least in the eyes of the uninitiated. Even if that’s not the case, the writers will still struggle to emphasize the differences between two very similar figures.

Currently, the lack of confirmed director or cast makes 2015 a tight deadline for a film of this magnitude – it would probably be sensible to push it back to 2016 at least. 2015 won’t just see Avengers 2: there’s the small proposition of Star Wars: Episode VII.

Avengers Assemble worked so well because of the strength of its characters. With years of films focused on individual heroes, the audience already knew the array of personalities involved and went in waiting to see how they interacted. The result was strong, snappy dialogue matched with spectacular action – there was room for both because there was no need to waste time explaining the heroes’ credentials. The final climactic battle took place against a fairly nondescript, unexplored Chitauri army, because the enemy only existed so the team could be shown working together.

As a result, I can’t help but feel that DC have got it backwards. Presumably the individual hero films would follow as spin-offs from Justice League, but this leaves a situation in which Justice League may well be laid down with story and character exposition without which a Wonder Woman film, for example, might feel empty.

I’d love to be proven wrong, though. Who doesn’t want to see Batman and Superman fighting side by side?