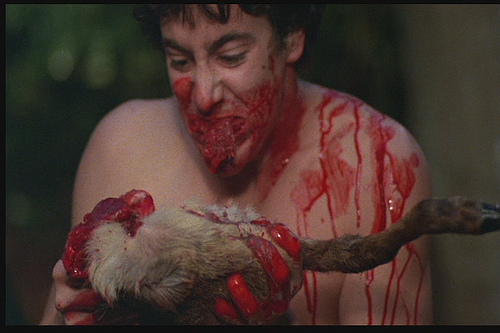 An American Werewolf in London – or the film that failed to kick-start Yorkshire’s tourist industry.

What comes to mind when you think of film in the 1980s? Return of the Jedi, Raiders of the Lost Ark, Back to the Future, Top Gun? They’re all classics, of course. But the truth is that some of the most definitive and influential ’80s movies didn’t quite attain the same heights. There are, in fact, two directors without whom the ’80s would not have been what they were, for better or for worse. One was John Hughes, the late auteur of The Breakfast Club and Ferris Bueller’s Day Off, among others, who perfectly summed up teenage life for a generation. The other figure, much less well-known today, was John Landis.

Landis might not be the most renowned director compared to the Spielbergs and Burtons of Hollywood, but he comes in a pedigree of his own. After various minor jobs on films such as Once Upon a Time in the West, he was offered his first directing position for Universal Studios: the supremely immature and yet hilarious campus comedy National Lampoon’s Animal House. From there began an impressive run of Hollywood success for Landis.

The 1980s easily marked the peak of Landis’ career. The Blues Brothers, which he co-wrote with Dan Aykroyd, features such classic soul artists as Aretha Franklin and Ray Charles acting in roles in which they perform their own hits. It’s endlessly quotable: “It’s a hundred and six miles to Chicago; we’ve got a full tank of gas, half a pack of cigarettes, it’s dark, and we’re wearing sunglasses.” Part road movie, part buddy movie, part musical, The Blues Brothers boasts a mixture of seemingly disparate elements held together by flawed but endearing characters. That, and Carrie Fisher (Princess Leia in Star Wars) trying to kill James Belushi by some of the most ridiculous means ever devised on screen.

More than this, however, Landis redefined a genre with arguably his best film, the comedy-horror An American Werewolf in London, which boasted ground-breaking special effects: make-up impresario Rick Baker created some of his finest work in the transformation of David Naughton’s hapless tourist into a terrifying hound of hell. What often marks out Landis’ films is the music; here, in particular, Landis’ sense of humour shines through. This particular soundtrack includes “Moondance”, “Blue Moon”, and “Bad Moon Rising”, which may, or may not, raise a laugh with their all-too-appropriate titles that fit perfectly within their context in the film. Gloriously bad geography aside (apparently you can pass out in the Yorkshire Dales and wake up in a London hospital according to Landis), there are few films that have better exemplified the dubious term “cult classic”. Just try to forget the fact that anyone made a sequel set in Paris which is frightening for all the wrong reasons.

There may have been misfires in the same period – you can probably guess from the title of Amazon Women on the Moon – but Landis’ star remained in the ascendancy with numerous more popular comedies throughout the decade. His impressive résumé as a director of adverts and television continued to grow: An American Werewolf in London inspired Michael Jackson to hire Landis in order to write and direct the most famous music video ever, Thriller, in 1983. The 80s zeitgeist, however, eventually faded away, and so did Landis’ film career. The same is also sadly true for the kind of film which defined him.

Landis’ greatest films belong to that unique category of the “cult classic”. In this instance “cult” doesn’t have to mean “low budget” – The Blues Brothers was the most expensive film Universal Studios had ever made at the time – or even “unpopular”, though it could be argued that An American Werewolf in London does fit that profile slightly better. It’s ultimately a title reserved for those slightly quirky, unconventional films which don’t perfectly fit into the mainstream categories of the film industry. “Classic”, of course, is a matter of taste and the test of time, but I would argue that neither of these films has dated badly: they are clearly of their time, but not to an alienating extent. In fact, for modern audiences that’s part of their appeal. Many films popular at the time have since fallen into this category, such as the oeuvre of John Hughes, as times and the industry have changed.

That change has been demonstrated in the type of films being produced for the same market thirty years on. Hughes’ teen comedies have been replaced with the gross-out humour of American Pie and Superbad, films which borrow as much from Landis’ Animal House as their claims to matching contemporary taste. It is, however, hard to think of another film which occupies similar territory to that of The Blues Brothers and An American Werewolf in London on the margins of the cinematic canon.

It may be this unique but limited success that Landis will hope to build on with his return to the big screen in Burke and Hare. For inspiration it takes the true story of the eponymous grave robbers in Victorian Edinburgh whose business is booming – until they start running out of fresh bodies to sell to the medical profession. Then they turn their hands to murder, naturally, to meet popular demand. Landis’ latest production has been taken on by the new incarnation of Ealing Studios; its earlier manifestation was responsible for such British classics as The Ladykillers and Kind Hearts and Coronets, films which Landis has always claimed as major influences (and significantly, both of which are comic expositions on murderers in brilliantly deadpan fashion). The tone of Burke and Hare is intended to recapture the none-more-black humour of these films, a tone which also comes across in Landis’ earlier An American Werewolf in London. The shocking things the protagonists do in Burke and Hare are always offset by snappy dialogue and an abiding affection which wants them to get away with their schemes, however dastardly they may be.

The impressive cast list should help Landis perfect this note of affection, as Burke and Hare are played by Simon Pegg and Andy Serkis respectively (Serkis stepped in after David Tennant had to pull out), who must be among some of the most lovable actors Britain has produced; they are hardly of the Anthony Hopkins school of serial killers, at any rate. The interesting thing is that although the subject matter is more reminiscent of An American Werewolf in London, the endearing and hapless double act at the plot’s core ensures that the film instead plays more like The Blues Brothers part two (or three), with moments of genuine farce into the bargain. Take, for example, a scene in which the infamous duo break the back of a dead body to force it into a barrel and then roll, drop, and chase it down the street until it crashes into a shop window. Perhaps the hybrid nature of the film’s genre can be blamed for its lack of success (its box office gross to date is less than two million), which may prove that the appetite for new films of this nature has faded, or maybe the public just objected to Isla Fisher’s highly suspect Scottish accent. Still, the enduring appeal of its ancestors shows that there will always be a lasting nostalgia for the great 1980s “cult classic” – just so long as it isn’t Amazon Women on the Moon.