The Power to Change Wizards 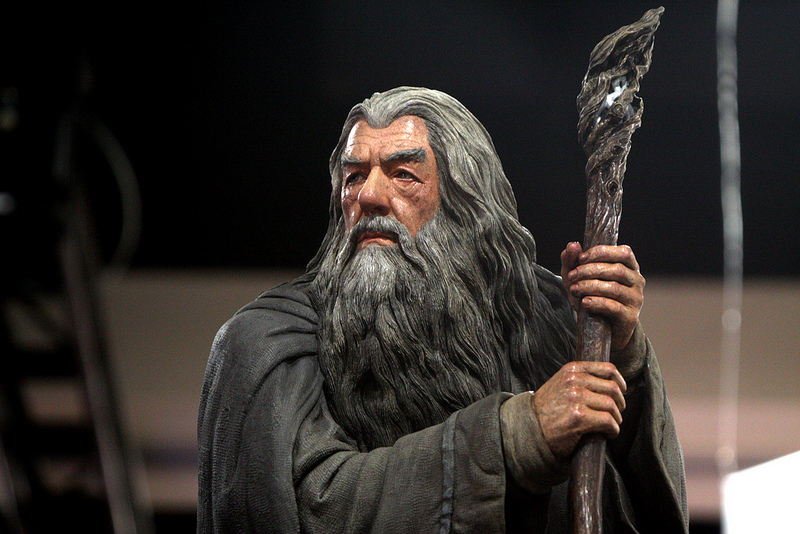 Do not take him for some conjurer of cheap tricks…

Perhaps the greatest achievement of the Harry Potter phenomenon – if “phenomenon” isn’t far too small a word, which it certainly is – is that it may well have displaced the traditional archetype of “wizard” in the minds of at least one entire generation. When I was growing up, the Platonic wizard was an old man in a big hat and even bigger beard, incanting from a book of spells in a croaky voice while sparks flew from his wand and his pet cat went to hide behind a bucket. These days, the word “wizard” is more likely to conjure up an awkward adolescent fumbling through his iPhone in a desperate search for a magical chant that will force girls to like him and make his acne disappear.

Not that Harry Potter would go near an iPhone (the arbitrary rejection of human technology past a certain point is an oddity of the wizarding world I won’t go into right now), but the point is that wizards have been made to be more like us. Of course, Gandalf is still fighting a rearguard action, but he has lost a valuable ally in the mythological wizard to beat all mythological wizards; I refer of course to Merlin, who in the recent (TV) adaptation went over the other side, choosing to be portrayed as a “youth” who, from the episodes I saw, made Harry Potter look as wise and as physically imposing as Conan the Philosopher. The meaning is clear: Gandalf is fantastic, but is a deliberate throwback to old legends. Harry Potter is the wizard of “today” (unless your view of today means looking back to the Old, but that’s a matter for a different article). Dumbledore’s death takes on an extra level of meaning when seen in this light.

Of course, all these characters were literary before they were cinematic, but cinema gave them visual presence, making it easier for us to dress up as them, parody and caricature them. Cinema must take some of the credit and responsibility for the process of shifting the archetypes. Correlation is not causation, but I wonder whether the success of Harry Potter has been, subconsciously or otherwise, a major influence in the recent spate of “re-imaginings”. To revert for a moment to pseudo-psychoanalytic speak, it is as if, suddenly, all of our childhood fairy-tale archetypes are emerging from their shells and into an updated public discourse.

Take Hansel and Gretel: Witch Hunters, the recent film in which the rather sickly-sweet, crumb-chucking siblings are updated into sexy, leather-clad arse-kickers. They’re basically totally different characters, so if the film does suck as badly as it looks like it will, then it’s not as if it will seriously displace the original, more-childlike Grimm characters in the way that Harry Potter has done for bearded wizards. Red Riding Hood, starring Amanda Seyfried and Gary Oldman, had a similar rationale behind it, although its source material is so varied and sinister anyway that the film barely functions as an example. The shifting fairy-tale zeitgeist may also have taken cues from Shrek, which so successfully updated fairy-tales into the modern day cynical consciousness. And one cannot avoid speaking of Twilight, although this seems to me a symptom rather than a cause. I am not personally a fan of the franchise, but it has been undeniably successful in changing the cultural view of a horror staple. How many people still think of “vampires” as big-haired Transylvanian aristocrats, rather than brooding Californian adolescents? I suspect the “old vampires” would have plenty to say of the young scallywags usurping them, in a way that reflects the generational gaps of the real world. This change shouldn’t be lamented in and of itself; after all, it even applies to the Dracula I grew up with, which had far more to do with the cinematic portrayals of Christopher Lee and Bela Lugosi, than with Bram Stoker’s character as originally written (possessor of an impressive white moustache and halitosis). I leave the incidental artistic merits of Twilight to your own judgement.

It’s not just fairy-tales and old legends: Sherlock Holmes, who is basically an archetype, has also been subject to recent re-imaginings, although this will be more to do with the fact that, short of releasing a prog-rock album or killing a dragon, he had already done everything else that possibly could be done – he’s even appeared in a film with Tom & Jerry, for goodness’ sake. As for Robin Hood, he has now been through more variations than a theme by Paganini.

Film gives new life to these cultural and literary icons, but it also enters into a creative, discursive process that changes them even as it presents them to us. To say it merely reflects the culture of the time is to underestimate the power which cinema has to feed back into our own imaginations; like a wizard magically turning a writing-table into a white horse, it can change wizards into us, but it also reminds us that the ground beneath our own identities is constantly shifting. Cinema is a record of our ride on the carousel of self-understanding; if it happens to have wizards and explosions, so much the better.