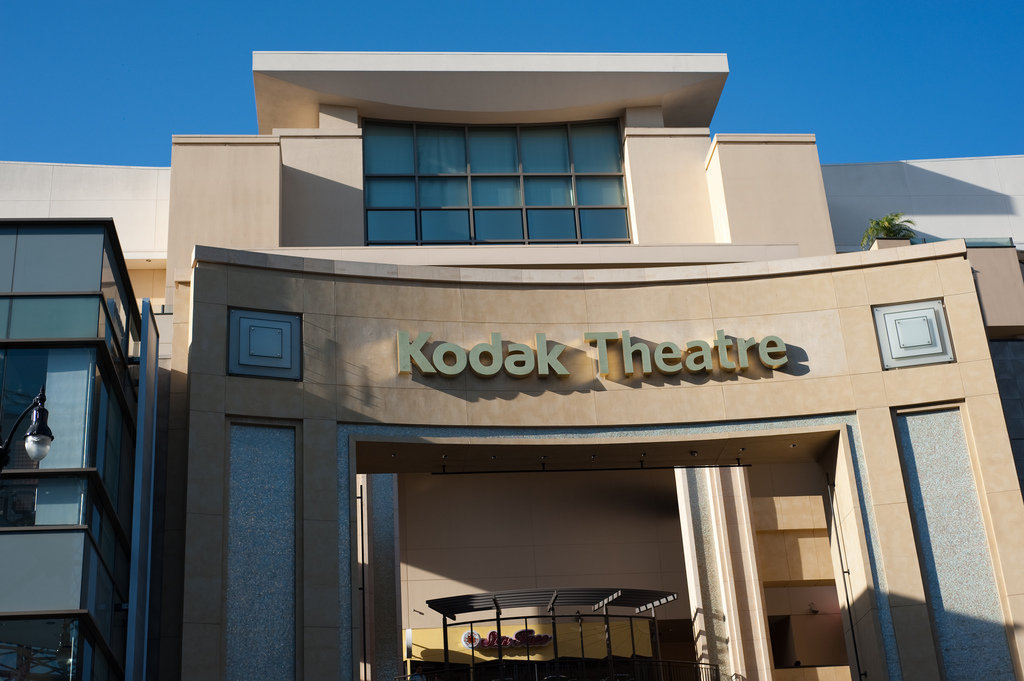 The 2012 Academy Awards are taking place at the Kodak Theatre

Welcome to The Bubble’s Oscar coverage! Commentary will come from Thom Addinall-Biddulph, Nikeel Boyd-Shah, Zach Cave, Alex Landon, Sarah Parkin, and Ruth Stanforth. We’re currently discussing our predictions for winners, and The Artist is definitely the pick of most people in the room. Could Martin Scorsese win Best Director for Hugo though? Will John Williams win yet again for best original score? Meryl Streep or Viola Davis? Let the games begin!

Sarah: and we’re off! Dodgy online streams won’t stand in our way! Welcome back Billy Crystal- you can’t be any worse than James Franco, and at least you’re not Eddie Murphy. Oh, he’s doing that standard “sing a song about the entrants” thing. Ah, well- you can’t win them all.

Sarah: Hugo’s first award of the night is for cinematography. Tom Hanks is on a production line of technical awards- Art Direction next… Oh, wait, it’s Hugo. There may be a few more to come for them…

Zach: Jennifer Lopez and Cameron Diaz are presenting the next award for Costume Design, following a rather inexplicable montage of old films….And….we’ve lost transmission. Hugo is nominated once again, along with The Artist. Taking any bets as to which wins…And The Artist wins, its first of the night, certainly won’t be its last.

Alex: Still bereft of a live feed, we’re now debating a) whether to blog on the 1966 Oscars, which seems to be a popular Google option and b) who the most irritatingly smug TV quiz show host is (aren’t they all irritatingly smug?)

Thom: Surprising absolutely nobody, Octavia Spencer wins Best Supporting Actress for her turn in The Help. And refers either to the Oscar statue or Christian Bale as the ‘hottest guy in the room’, then tearily thanks Alabama. A first-time winner for a film whose acting rises above its sometimes saccharine story.

Alex: More surprising than Octavia Spencer’s win is Zach’s revelation that he believed she was thanking Satan for her win…well, demonic worship and pagan sacrifice might do the job…

Meanwhile, my earlier comment about the brief appearance of Emma Stone in a Supporting Actress montage was somehow deleted, but my undying love for her will not be stopped!

Thom: Looks like Christopher Guest’s mockumentary troupe (Best In Show, A Mighty Wind, For Your Consideration, Waiting For Guffman) was responsible for that sketch- Eugene Levy, Bob Balaban, Catherine Keener, Fred Willard, all in there.

Nikeel: After a surreal interlude involving offensive comments about munchkins, Tina Fey and Bradley Cooper appear to give us the best editing award. It goes to The Girl With The Dragon Tattoo. Best sound editing goes to the guys from Hugo. Now they’re doing an Abbott and Costello routine. ‘Hugo?’ ‘No, Hugo.’ Hugo also gets the best sound mixing award, although who knows what exactly differentiates that from sound editing. At least there are no terrible jokes from these two.

Sarah: Sound editing and mixing. One of the perks of reading this blog after the fact will be the knowledge that we sat through the dull technical awards so you didn’t have to. Although, the sound winners for Hugo give a more amusing acceptance speech than usual… Ditto for the mixing, but with different people. Because apparently they’re different things…

Ruth: I have nothing interesting to say… on wrinkles. Literally being plagued by beauty adverts, clearly cashing in on the whole red carpet shenanigans. Yawn, and not even in a ‘half 2 in the morning’ way.

Ruth: And now I am apparently the only one saying anything, for silence has fallen with the appearance of… MISS PIGGY! Much Muppet-y love from these Bubblers; the majority of those present saw and LOVED their recent offering. Cue the nostalgia.

Sarah: Kudos to Cirque du Soleil for their gritty and realistic representation of going to the movies. I frequently swing from trapezes, do backflips and stand on people’s hands in a cinema.

Alex: Animated Feature Film goes to Rango, as Gore Verbinski gets confused and tries to leave the stage by the wrong exit. The latest dubious advert features housewives with shotguns (Desperate Housewives indeed!) and polar bears hugging men in suits – yes, we’re just as clueless as you…

Sarah: on the animation front: Tintin was robbed. Not even nominated. Shame on you, Academy.

Alex: Emma Stone is back, everything else has become irrelevant. Singing, attempting to dance with Jonah Hill, insulting Ben Stiller’s infamous Avatar impersonation, I don’t care what she does, she is still utterly fantastic! Melissa McCarthy and Billy Crystal’s introductory homage to Bridesmaids is also worth a mention, as Hugo picks up another honour, this one for Best Visual Effects – Sarah has the angsty rant…

Sarah: on the visual effects front: Rise of the Planet of the Apes and/or Harry Potter were robbed. This may well become a theme. Now, Supporting Actor… I’m guessing Christopher Plummer.

Sarah: I’m right. Well, he’s getting on a bit at 82, so the Academy seems to have realised it owes him- and, to be fair, I’m loving his speech. It started with flirting with the Oscar statue and continued with him saying he lacks the decency to share the award with co-star Ewan McGregor. Captain von Trapp, we love you.

Zach: And after an ad break during which I was informed I was once mistaken for “an attractive blonde woman” we’re back. Billy Crystal is reading the mind of Morgan Freeman and the dog from The Artist amongst others, and it’s awesome. Some guy who I’ve never heard of is giving the mission statement of the Academy and telling us thanks for turning up…That’s nice of him.

Zach: Penelope Cruz and Owen Wilson presenting Best Original Score. Shockingly The Artist wins itself another Oscar. Slightly surprised John Williams didn’t get another- he may have had 5 already but he’s 80 now, which is around the token award win age.

Sarah: Stupid voting systems mean only two nominees for Original Song… But it goes to The Muppets. If you loved them as much as most of the people in this room, you’d be as happy as we are. If only Kermit had accepted the award…

Alex: After Billy Crystal’s minor faux pas whilst introducing Angelina Jolie, we have a first win for The Descendants, for Best Adapted Screenplay, beating Brit favourite Tinker Tailor Soldier Spy to the statuette – nominated in five categories, it was likely to win one at some stage.

Thom: Slight surprise as Woody Allen wins his first Oscar in some time for Midnight In Paris, and maintains his lifetime habit of not actually turning up to accept his award (having also long refused membership of the Academy); Angelina Jolie accepts on his behalf. And our feed goes down!

Ruth: I’ve been told to write “But not for long, because I’m amazing!”. This, of course, refers to my brilliant technical wizardry which is facilitating the whole morning. The feed was down no more than 2 minutes whilst I furiously (and speedily) found us a new channel. Damn that beast of an Internet, I shall slay you!

After some awkward jokes from the girls about length (apparently we’re still no closer to finding out whether length matters) which, as a co-blogger drily notes, “had potential but flopped” (BAZINGA! – Ruth), Irish film The Shore wins Best Live Action Short. Outrage in the blogging camp as God is the Bigger Elvis, a film we’ve never heard of or have any strong feelings for (we just loved the whimsical name!) is beaten to the Documentary Short by Saving Face – frankly that is daylight robbery! Best Animated Short goes to the similarly whimsically titled The Fantastic Flying Books of Mr. Morris Lessmore, annoyingly long to type!

Ruth: And now for Best Director, or as presenter Michael Douglas put it, the ‘visionaries’. I’m upset that I’ve forgotten my Oscars bingo card, ‘cos several clichés have already made appearances – obvious suck-uppery, crying, things falling over… We’ll keep you posted on these. Meanwhile, I’m not paying any attention to the nominee summaries. I assume I will just be informed by my opinionated co-bloggers as to who should’ve won, since they’re all engrossed. Tense, so tense. MICHEL HAZANAVICIUS! Not ashamed to admit we had to Wikipedia that spelling, but I am pleased with this result – The Artist is amazing, and his acceptance speeches are just about the right amount of modesty and wit. Maybe it’s the French thing, maybe it’s the way he’s holding on to that figurine and violently waving it about, I don’t know. But well done him.

Alex: The Sky Movies commentary is innane and rather dull, so in the absence of anything else to do, we are keeping ourselves entertained by mocking Zach’s most hideous pair of “70’s” trousers. If you are fortunate enough to have never seen them, then you are incredibly lucky – they are quite literally an affront to humanity, burning the eyes of anyone who beholds them. Back in L.A., there is the annual “those we’ve lost” montage, with the obligatory soulful song to accompany it (by a woman with the most awesome afro ever!). Sad, yes, but at least they’ll never have to see Zach’s trousers…

Nikeel: Best Actor time, with a very pretty Natalie Portman hosting. We have the guy from A Better Life whose name I can’t even remember, Clooney in The Descendants, Jean Dujardin for The Artist, Gary Oldman for Tinker Tailor Soldier Spy and Brad Pitt for Moneyball. A well-deserved win for Jean Dujardin for his George Valentin, whom he eerily resembles even tonight.

Alex: We’re at the business end of the awards now, into the Lead Actress category, with Viola Davis and Meryl Streep seen as the only two contenders. All the hype over the last month has been about Meryl, but Davis has seen a late surge in popularity which could see her steal the statuette from under her nose. Rooney Mara, Glenn Close and Michelle Williams are all worthy contenders, but this is surely a straight shoot-out. And it goes to…MERYL STREEP! She ends 30 years of Oscar drought with a win for The Iron Lady, and receives a standing ovation as she takes the stage. Wit, charm and thanks in equal measure, with some tears too, her 17th nomination today has extended her record further beyond nearest contenders Nicholson and Hepburn. Only the fourth person to win 3 Oscars or more, she thoroughly deserves it. Over to Best Film now!

Ruth: So far, so predictable. Are we in for a shocking finale with the last award left unclaimed, Best Picture? I’ll be honest – probably not. With 9 nominees, it’s a strangely large bag to draw from, but again the choice seems obvious. Even Wiki has been updated ahead of the announcement. The Artist takes it, as predicted. The first silent film winner since 1929- BUT TRIVIA ASIDE, THE DOG HAS TAKEN THE STAGE! A suitably feel-good end to a generally good show, aside from technical hitches and awkward Oscar passing. Just enough time left for Monsieur Hazanavicius to order his children to bed, and Billy Crystal waves us off.

Sarah: Well, we’ve all moved on to assessing some of the fashion highlights and faux pas (Alex on Emma Stone’s dress: “It’d look better on my floor”), so I suppose that’s it for another year. So, what have we learnt?

Educational indeed, but with even fewer surprises than last year, though, and we’re all starting to wonder whether the Academy really has any tricks left up its sleeve. Alec Baldwin has already tweeted that he’ll be remaking The Artist with sound- my money’s on that as the front runner in 2013, so check back next year for more sarcasm and Muppet-worship.