The Day I Auditioned for Star Wars

As I stood on the platform at Durham railway station just after six o’clock on a cold November morning, a small part of me wondered what on earth had possessed me to go through with such an insane plan.

What had possessed me to get up at half past four, after less than four hours sleep, to catch the early train to Manchester? Surely there were better, less strenuous ways to spend a Saturday? Why didn’t I just have a lie-in and watch daytime T.V. like a normal student? 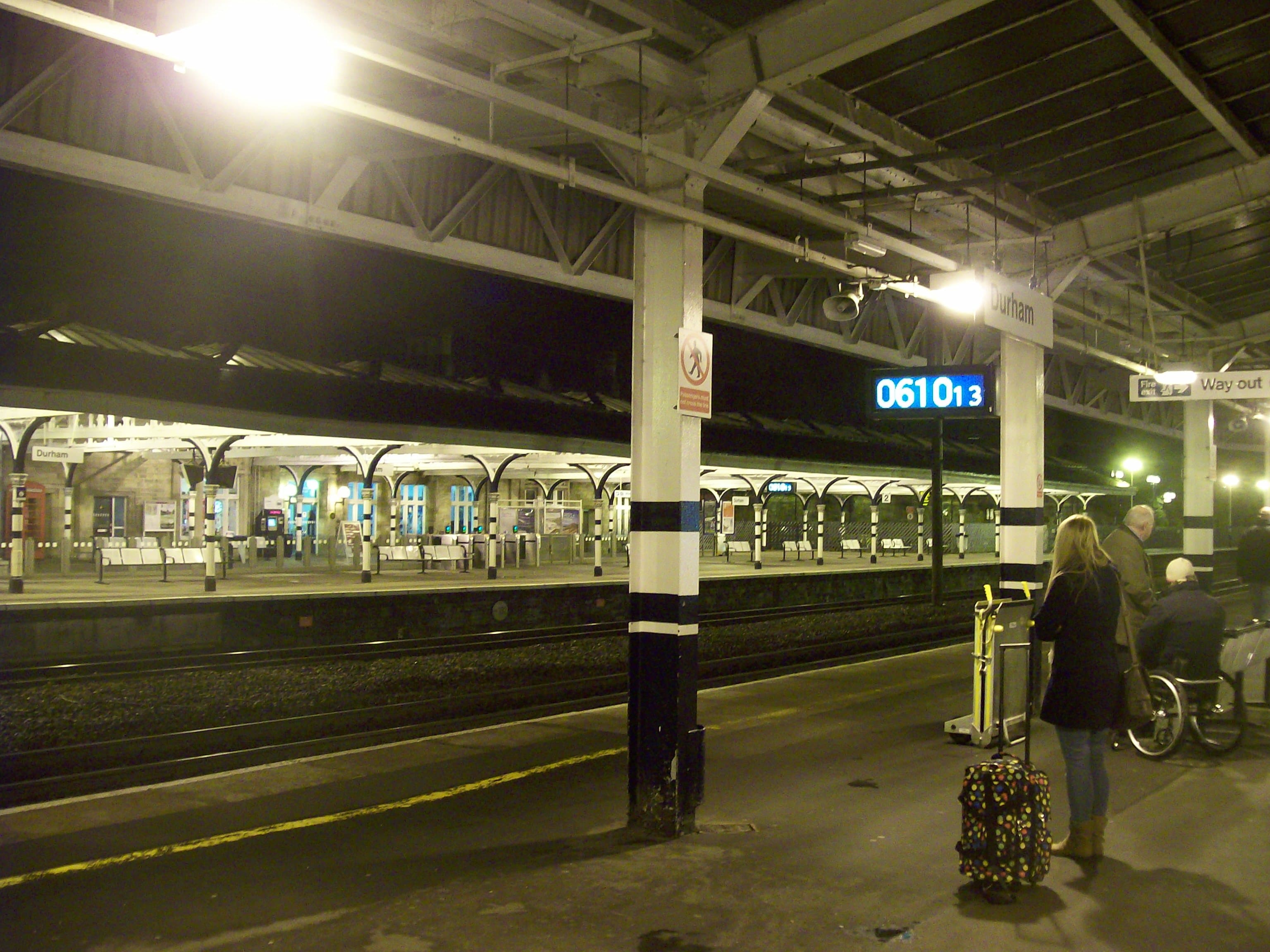 But then, the larger part of me knew the answer. For this was to be no ordinary Saturday. This day could change my life, it could propel me to instant stardom, it could earn me more riches than I had ever dreamed of.

This was to be the day that I auditioned for Star Wars.

It had all started for me about a fortnight beforehand, when I had heard via my radio alarm clock that open auditions were to be held for Star Wars: Episode VII. As I put on my dressing-gown and slippers and dragged myself downstairs for breakfast, a single thought continued to bounce around my head: ‘Wouldn’t that be fun?’ After all, it’s not every day that you get the chance of playing a leading role in one of the biggest film franchises of all time. Surely it was worth a shot. And so, in my dazed half-awake state, I made myself a promise: if it didn’t clash with anything else, I would go along to those auditions and observe the mighty machine of the film industry in action.

A quick Google search told me that they were looking to cast two roles, one of which was described as a ’19- to 23-year-old man’ (check), ‘handsome, smart and athletic’ (well, I’ve got the ‘smart’ – we can work on the other two), who ‘can appreciate the absurdities in life and understands you can’t take life too seriously’ (surely the fact that I would be going all the way to Manchester just for an unconventional weekend adventure was proof of that). Plus, I have been a Star Wars fan for many years. In short, I would be perfectly suited to the role! Oh, except for the fact that I hadn’t acted since secondary school. But acting ability was surely not a major concern of the casting directors.

Of course, I knew that the chances of me getting a call back were infinitesimally small. The previous week they had held auditions in Bristol, to which three thousand turned up with only a hundred or so being asked back. So on a statistical basis, the chances of me getting through to the next round were around three hundred to one. But then again, in the words of Han Solo, “Never tell me the odds.”

And that’s what brought me to Durham station first thing on that Saturday morning. What’s more, though, I soon discovered that I was not the only nutter in the city. It turned out that an old flatmate of mine from first year (who for reasons of anonymity we shall refer to as Hector), had had exactly the same idea. Hector is a keen actor, having appeared in a number of Durham Student Theatre productions over the past year or so, and therefore it didn’t surprise me in the slightest that he was going to take advantage of this golden opportunity. And to be honest, I was delighted to find a companion, as I didn’t fancy facing the inevitable hours of queuing alone.

Before long we both found ourselves taking our seats on the train and two and a half thrilling hours later we arrived at Manchester Piccadilly before catching a tram to Emirates Old Trafford, which was to be the venue for our escapade. It didn’t take us long to find the line of hopefuls waiting for their shot at fame – frankly, it would have been difficult to miss. After walking the considerable distance to the end of the line, we took our places and prepared to participate in the great British sport of queuing.

And queuing a bit more. 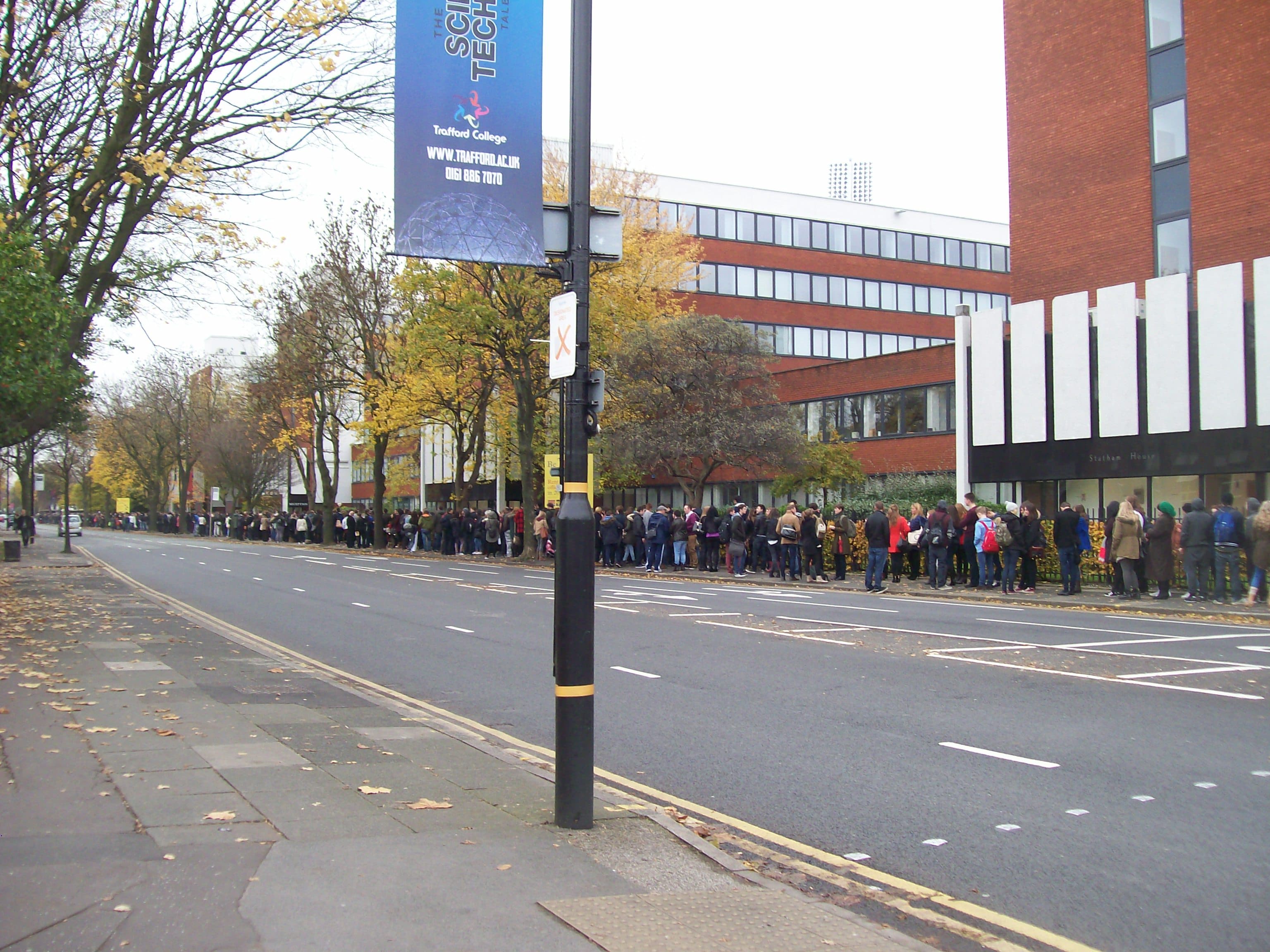 In total it took us four hours to reach the front. Fortunately Hector is an excellent conversationalist – much better than me – and so the time passed quicker than I would have expected, livened up as it was by animated discussions with our fellow auditionees. Other exciting highlights included lunch (I had wisely brought a pack-up), and also the dreadful moment when one applicant, after around three hours in the queue, was sent home because he had forgotten to bring a photo of himself. The best part for me, though, was seeing a small group from the ‘501st Legion’ (a Star Wars costuming society) entertaining the crowds by parading up and down wearing exquisite handmade replicas of Stormtrooper costumes. It really was a sight to behold. 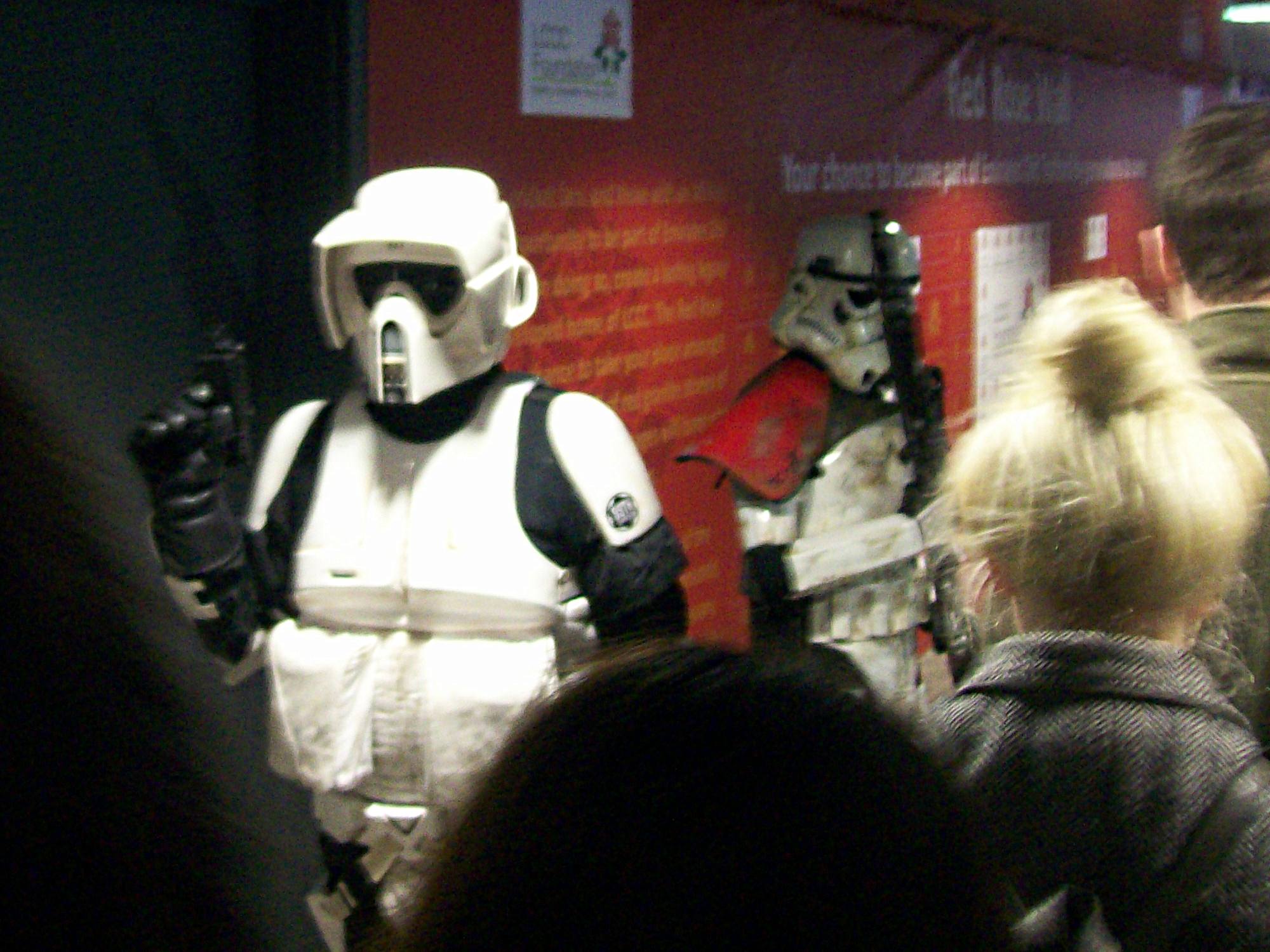 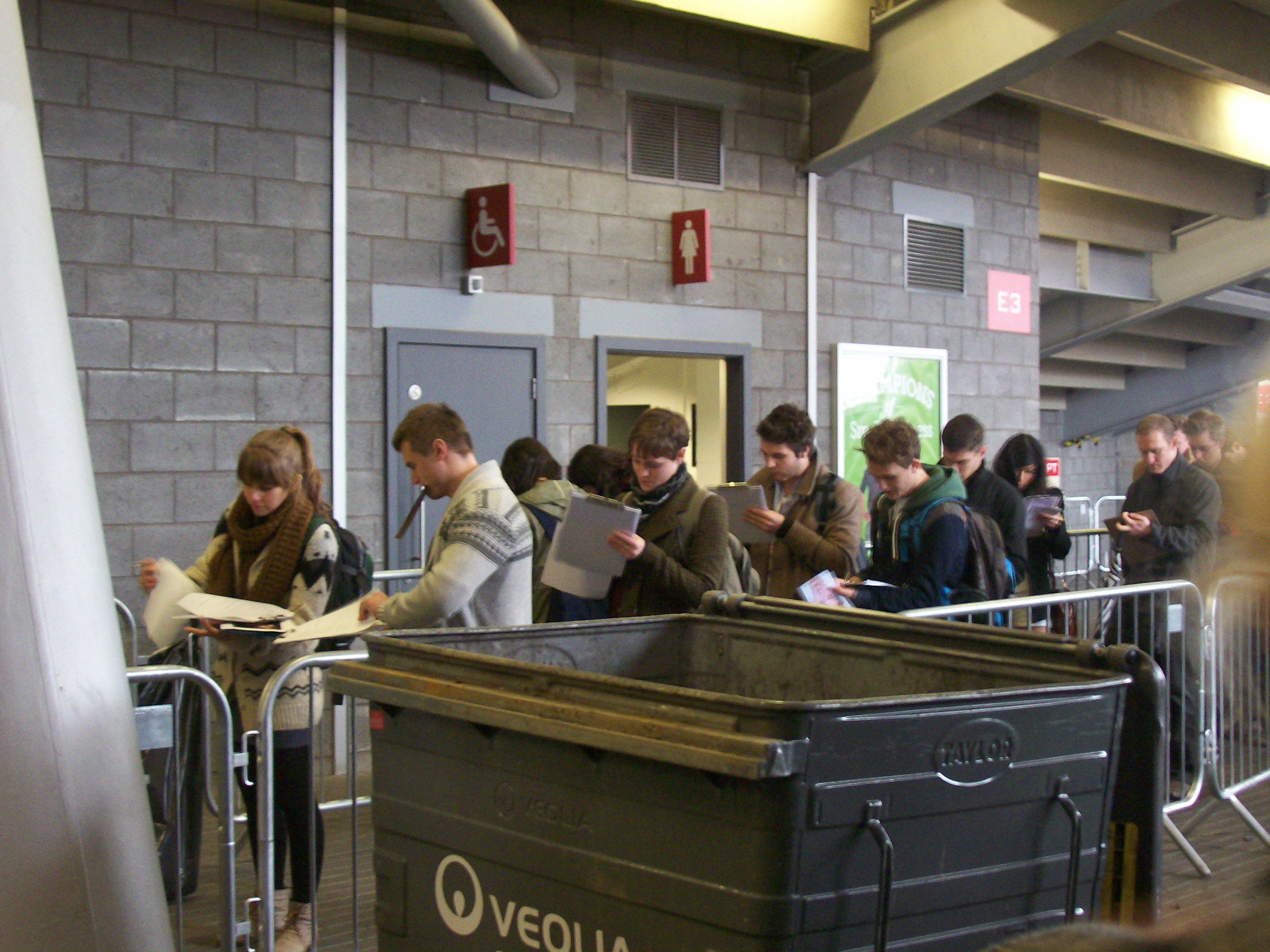 Eventually, of course, we did reach the front and were led, clutching forms on which we had filled in our details, into the casting tent. This consisted of two rooms. The first contained several mirrors so we could check that we were looking appropriately handsome, smart and athletic. For some strange reason, above each mirror was a sheet of paper with a single word printed on it such as ‘JEDI?’, ‘SITH?’ or ‘WAMPA?’ (which, embarrassingly for them, was misspelled ‘WHOMPA’).

Shortly we moved into the second room, where a young man would glance at your details form, glance at you, and assign you either to The Left Queue (i.e. ‘get lost and go home’) or The Right Queue (i.e. ‘we’ll give you a chance’). Up until then I had tried not to think about the possibility of getting through, because the chances of it happening were so slim. But it was impossible to completely silence the quiet thought in the back of my mind that kept asking ‘What if?’ What if, by some bizarre stroke of luck, I got asked back and was ultimately given the part? This could be a defining moment in my life. I could end up being the next Harrison Ford! Or at least the next Mark Hamill…

My time had come. I stepped forward and held out my form.

“Hi,” said the man, glancing at my details.

“Left queue,” said the man without a moment’s hesitation.

Oh well. It had been worth a try!

Hector was slightly luckier than me. He was sent into the right queue, and after yet more waiting around was invited into a room where he was asked questions such as ‘Why do you want to do acting?’, ‘Who is your favourite actor?’ and ‘What is your favourite film?’ Then he was rejected.

So alas, it would appear that neither of us are destined to feature in the next instalment of that great sci-fi epic. And I would be lying if I said I didn’t feel a little downhearted immediately afterwards. But then, I never really stood a chance. The important thing is I had a fun, positive experience. I got a chance to catch up with Hector and meet some wonderful new people, however briefly. And most of all, I had one brilliant adventure.

Besides, all is not lost. They did keep everyone’s photos and contact details, so I may yet land a part as Yoda’s cousin or some disgusting alien creature. Only time will tell.