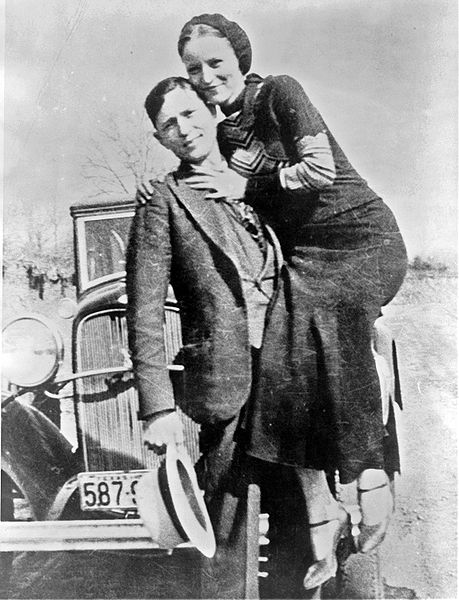 Bonnie and Clyde in 1933, the year before their deaths.

The young, daring, and tragically destined Bonnie Parker and Clyde Barrow were in many ways the modern incarnation of such star-crossed lovers as Romeo and Juliet, or Tristan and Isolde. In the violence and passion of their tumultuous romance cinema has repeatedly found a source for iconic drama as audiences have been inexorably drawn to the portrayal of two infamous outlaws, on the run from the law, from society, and just for the hell of it. Director Tonya Holly is the latest to be inspired by the glamorous couple and their notorious exploits; The Story of Bonnie and Clyde, starring Hilary Duff and Kevin Zegers respectively in the eponymous roles, is evidently to be a remake of Arthur Penn’s 1967 classic, Bonnie and Clyde. Holly has again chosen to helm a romanticised vision of the two gangsters rather than an historical account of their lives, yet this remake overlooks what so defined Penn’s film, in that it was a product of its generation and thus deeply anchored in the social and political contexts of the 1960s.

Admittedly, Penn’s Bonnie and Clyde did adhere to the broad details of the volatile pair’s spree of armed robberies, murders, and police encounters between 1932 and 1934, spanning several states from Texas and Missouri to Kansas. The blood-spattered dénouement of Penn’s film also vividly echoes the shooting of Bonnie and Clyde during an ambush organised by Texas Ranger Frank Hamer. Originally conceived, however, as a uniquely different project by David Newman and Robert Benton, editor and art editor respectively of Esquire magazine, who were interested in making a film in the vein of the French New Wave of cinema, such as François Truffaut’s Shoot the Piano Player (1960) and Jean Luc Goddard’s Godard’s Breathless (1960), Bonnie and Clyde sought to develop the new aesthetic mode of “gangsterism” in film. Moreover, the 1960s was a period when the progressive spread of television jeopardised Hollywood’s traditional income, thereby leading the industry to increasingly ignore the Production Code Administration (in relation to what was acceptable cinematic material) and revert to the sex and violence that had been a staple of entertainment from the time of Seneca. This process was accelerated by the success of art house cinemas showing uncensored European films across the country. Indeed, Bonnie and Clyde was one of the first films to acknowledge these changes and subsequently attempted to appeal to the dwindling cinema audience, which was then mostly comprised of students with anti-establishment leanings, as is best illustrated by the film’s tagline: “They’re young… They’re in love… And they kill people”.[1] Hence, the film was very much a product of the combined influence of the French New Wave and its impact on American filmmakers and of Hollywood’s changing marketing imperatives in the 1960s. In essence, Penn’s Bonnie and Clyde can be viewed more as chronicle of that epoch than as a record of two infamous criminals.

Furthermore, Newman and Benton always intended to “use the past to talk about the present” and therefore selected a story that complemented a context of youth revolt, pervasive violence, and sexual liberation.[2] Bonnie, as portrayed by Faye Dunaway, gained appeal from her relevance to the rising tide of feminism in the America of the 1960s, rather than from her criminal activities in the 1930s. She thus emerges as a woman fully conscious of sex and her own sexuality, whilst being a powerful equal to Clyde’s masculinity. Indeed, this notion of female independence was particularly well conveyed by Theadora Van Runkle’s costumes, which highlight an evolution from the simple sex appeal of the typical waitress to the combination of feminine grace and professional assurance with the maxi-dresses and beret. This iconic style was one that many women came to imitate after the film’s release, recognising the change in the prevailing sexual politics of the period that it indicated. Similarly, Penn’s choice of gangsters as heroes was especially relevant at a time when violence was omnipresent on all levels of society, from the political assassination of John F. Kennedy to the students’ ill-fated protests against the escalating war in Vietnam. For correspondingly, throughout the film the intensity of the violence depicted progressively increases, until its unprecedented graphic climax with the incredibly brutal death scene of Bonnie and Clyde. Notably, this scene emphasises Penn’s symbolic use of the narrative of Bonnie and Clyde to address the mounting concerns of the 1960s; the bloody decimation of Clyde’s body provides a conscious and disquieting parallel to the all too familiar footage of the Kennedy assassination.

The two fugitives’ lives were not universally appealing to the audience of the 1960s, since the factual reality of the story was in fact adjusted to enhance their dashing charm of guns, robbery, and daring escapes. Indeed, the most telling distortion of the historical facts was the transformation of rather ugly and violent criminals into glamorous anti-establishment heroes. Consequently, this blurring of the truth gave birth to scenes that had more in common with folk mythology than reality. This sense of distortion is exemplified in Penn’s film with the image of Clyde as a chivalrous purveyor of marshal justice in encouraging a farmer to shoot on what had been his former property, prior to its confiscation by the faceless bureaucracy of the bank, or through Clyde’s ironically misguided assertion that he stole from the banks and not the people. Equally, Penn and Warren Beatty, as both the film’s producer and lead actor, decided to ignore the issue of Clyde’s bisexuality and relationships with male members of the Barrow Gang, as they considered that this might alienate part of the audience. In a Freudian twist, however, they decided that Clyde should be impotent instead, which thus gave birth to the film’s recurring imagery of guns as symbols of sexuality: the ultimate combination of sex and violence. The portrayal of Bonnie and Clyde by Warren Beatty and Faye Dunaway was therefore far removed from the genuine couple’s relationship, yet one expects that the forthcoming Story of Bonnie and Clyde will base its own depiction of the infamous criminals on Penn’s interpretation of the 1960s, rather than the historical truth.

Penn’s vision of Bonnie and Clyde was intrinsically a film of its own time, and was thus transformed into an allegory for the socio-cultural conflicts of the 1960s among contemporary critiques and audiences. Traditional American values clashed with the movement for youth revolt within the film and on a wider scale in its critical interpretation. From its conception to its reception, Bonnie and Clyde was emblematic of the 1960s. It is therefore difficult to be optimistic about Holly’s modern remake, since it appears to be nothing more than a crude pastiche of a cinematic masterpiece of the 1960s. A film that did attempt to recognise Clyde’s bisexuality or present the less exhilarating reality of Frank Hamer as the hero of the narrative would be applauded for its commitment to historical accuracy, yet would almost certainly fail to have any significant impact with a modern audience, as it would have also failed in the 1960s. Penn’s cult film has ultimately superseded the historical reality; it no longer stands as a dramatic account of the notorious Bonnie and Clyde, but instead is a testament to the social and cultural movements of its own turbulent decade.