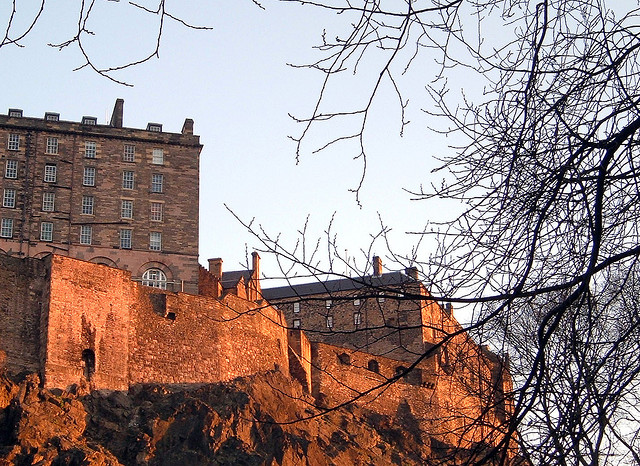 The sun shines over Edinburgh Castle, but does it shine on Sunshine on Leith?

Derogatorily dubbed “McMamma Mia” by the BBC’s Steven Brocklehurst, Sunshine on Leith brings the music of Scottish identical twins Charlie and Craig Reid (otherwise known as The Proclaimers) to the big screen. Based on a stage musical of the same name, the film follows best friends Ally and Davy, Scottish soldiers returning home to Edinburgh after a tour of duty in Afghanistan. In many ways, this is a simple coming of age film, showing both boys’ attempts to come to terms with the tragedy of war whilst reintegrating into the lives they left behind. Inevitably (for a musical rom-com) this reintegration focuses on the pair’s romantic entanglements as Ally restarts his relationship with Davy’s sister Liz, and Davy falls for Liz’s best friend Yvonne.

In 2008, Mamma Mia swept the box offices becoming an instant, worldwide sensation and the highest grossing musical of all time. Due to their similar genesis, it is unsurprising that a comparison has been drawn between the two films. Both musicals are based on hit songs by well-known groups, both started as stage productions before hitting our cinema screens, and both films fit into the same feel-good, ‘jukebox’ musical genre. Both storylines feel equally contrived as the plot is entirely dictated by the need to accommodate the biggest hits, adding an air of predictability as the plot roves from song A to song B via song C.

Even the finished films have some similar features. While the razzle dazzle, shimmer, and shine of Mamma Mia’s Greek island paradise glitters enticingly in every shot, Sunshine on Leith could have been produced by the Edinburgh Tourist Board. In a week where both Sunshine on Leith and Filth – an adaptation of Irvine Welsh’s novel of the same name – thrust Edinburgh onto the cinematic centre stage, both films depictions of Edinburgh are about as tonally dissonant as it is possible to get (even if you haven’t seen Filth, Danny Boyle’s iconic adaptation of Trainspotting – another of Welsh’s novels – gives some insight into the gritty, grimy, and surreal style which pervades Filth). With its wide sweeping shots of the Edinburgh skyline, dramatic sunsets over Edinburgh Castle and a finishing flash-mob outside the Scottish National Gallery on the Mound, Sunshine on Leith is Filth’s polar opposite; very much a love letter to ‘The Old Town’. There is never a shot in the rain, or even with grey sky. The omnipresent, titular ‘sunshine’ makes the exterior shots glow with warmth and vibrancy. Artistic licence? I think so!

However, is dismissing Sunshine on Leith as merely a ‘Scottish Mamma Mia!’ entirely fair? Before addressing this, I must say that despite all its problems – the plot, Amanda Seyfried’s saccharine smiles, the glitz, the cheese, Dominic Cooper and, above all, Pierce Brosnan’s singing – I can’t help liking Mamma Mia! At its heart it is a genuine celebration of the songs of ABBA. Yes, it’s inane, yes, it doesn’t require any brainpower and yes, as Mark Kermode said, it’s ‘the closest you get to see A-List actors doing drunken karaoke’. Ultimately I find it endearing and watchable – which is more than can be said for a lot of films! Perhaps Mamma Mia’s biggest endorsement was that 50% of ABBA, Björn Ulvaeus and Benny Andersson, were so thrilled with how the film treated their music, they wanted cameo appearances.

The comparison of Sunshine on Leith to Mamma Mia is understandable and furthermore justifiable, but this is not to say that it should be snottily dismissed because of its loose kinship with the aforementioned ABBA-based smash hit. Sunshine on Leith has a lot to offer the audience and I believe it outshines its glitzy, high-budget elder cousin. The chief attraction is that its main cast are really good singers. By avoiding A-list stars there is less of a drunken karaoke feel and the audience gets emotionally involved with the characters and their romantic plights far more than they ever did for Brosnan, Streep, Firth, Walters, Seyfried or Cooper. Additionally, because of the way the songs have been adapted for film, the actors are allowed to showcase both their acting and vocal talents.

The songs have been dissected and cleverly remembered, their dialogic nature lending itself to the splitting of lyrics and harmony between characters. This adds an originality to the songs which raises them artistically above the direct rehashes and inferior versions of the ABBA classics in Mamma Mia. Whilst Charile and Craig dismiss their songs as ‘pub-style’, they were full of praise for the cast, especially the female singers who brought a ‘sweetness’ to the songs that were never there previously. In fact, as with Björn and Benny, The Proclaimers have a brief cameo appearance as they walk out of their local pub.

Beyond the music, the themes dealt with in Sunshine on Leith far exceed Mamma Mia in their maturity and gravitas. With the opening scenes depicting troops sitting in the back of a tank in Afghanistan, the eerily rousing version of ‘Sky Takes the Soul’ lends an immediate grittiness which runs through the film, lurking out of sight, yet occasionally rearing poignantly during the scenes where Ally and Davy visit their friend, and fellow soldier, who lost both legs in Afghanistan. This shadow of darkness counterbalances any sense of flippancy or frivolity in the film’s treatment of such serious topics.

So if you take Mamma Mia as your archetype and basis of a film musical, based on hit pop songs, which first started out on stage, of course there are inescapable similarities to Sunshine on Leith. However, it is in the differences between the two films that the real interest lies. Sunshine on Leith, set in Edinburgh, has better singers, better adaptations of the songs, a better plot line and superior subject matter. That is not to say that this is a perfect film. As with Mamma Mia, Sunshine on Leith has its problems. However, it brims with such feel-good-factor and is, at its core, so genuine and so likeable that you forgive it its faults. Maybe it’s not for everyone – musicals aren’t always – but put all your prejudices aside. It isn’t Mamma Mia. What it is is a celebration of Edinburgh, Scotland and The Proclaimers. Ordinarily, I would never quote the Daily Mail, but on this occasion, I think their review pithily sums up Sunshine on Leith with the line: ‘it’s not the best film of the year, but it’s the most likeable!’