Reflecting on HUMAN: A documentary

Right. I’ve sat at this chair and this computer for 90 minutes of a possible 270 which will be viewed later. But I needed to just sit. Because I have some thoughts I need to write down.

They aren’t revolutionary. They aren’t all new to me. Some probably aren’t new to you. But they need to be re-acknowledged. I can’t really say why yet.

[EDIT: Hello. It’s the future me. It’s 02.53am in London and the birds are up. But I think I’ve finally finished what I was trying to say. Or not at all. Not sure yet. Please read on.]

For the past 90 minutes I have watched stories. Arguments. Ideas. I’ve seen Love. Hate. Pain. Frustration. Anger. Joy. Passion. I’ve heard all that too. I’ve disagreed. I’ve cried. I’ve laughed. I’ve done both of those at the same time.

I personally don’t believe there is a way to describe all people. All humans. Some people say we are all ’beautiful’. But some people aren’t. There isn’t a word. We just are. We are so varied in every way you could possibly imagine. Why should one word be able to do it justice? Language and its variants are an amazing tool – they pass the boundaries of any expectation there could have possibly been. But words still cannot describe this. Maybe I need to pick up another language. Or 70. Somehow I still doubt that will help fully describe what ‘people’ are. 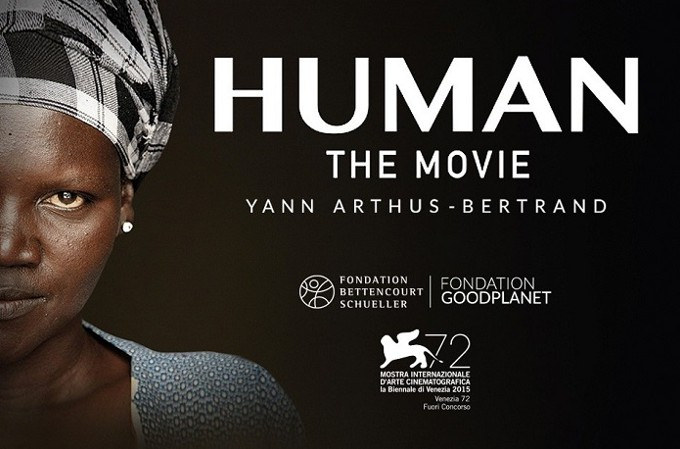 The documentary HUMAN was premiered at the UN in 2015

What I love are people’s faces. They are so expressive. They tell you so much, even when you aren’t looking at it, when you aren’t trying to find anything there. You may not realise it in that moment. Or think you know what’s behind it. But it is able to tell you something. About yourself, about that person. About the tear, about the smile. About the world. About anything.

And the ability for something to be that expressive, that you can’t even pin down on one feeling or response – is, I have just discovered, one of life’s greatest wonders.

I just watched this documentary. It was directed by a man I greatly respect. It was amazing. We in this so called ‘great and modern’ world have a view from the ‘top’, as many people see it. It should be the best view – you can see everything. But you can’t see the view from the bottom. What it’s like to look from the other direction. And you will never be able to. This film is a collective of snippets from people’s lives. Their thoughts and experiences on many possible topics. The hard graft of simply being human. The churning of the ‘system’. The fact that someone can acknowledge that they are a ‘bad’ person – or that someone else does not see the same condition in themselves. What love is.

This triumphant unicorn of a production displayed aerial shots of the world that we will never get to see with our own eyes (of which I am truly crushed). Of a world in which humans walk along sand crescents, and dig deep into the earth. Where a shovel is an extension of someone’s arm. Where gender, materials, wealth, happiness, could or could not be important.

And I haven’t spoken a single word since the beginning of the movie. I’m not stunned… or maybe I am. I’m just taking it all in. I’m just existing in this moment. Those are the words of people you or I will never meet. Or maybe you will. Maybe you’ve passed them in the street before. But thinking of all the people I have ever passed in the street, or anywhere I’ve ever been is difficult to conceptualise. I don’t remember 99.9% of their faces. But imagining the stories. I have absolutely no doubt that even the best imagination would run out far before the stories do.

I don’t think it, whatever it is, is about learning for yourself. Or to spark an interest in something someone else talked about. They are both by-products. We are naturally curious creatures. We often forget we are creatures too. But I truly believe it is about understanding – as much as we can – that in what we differ in, we share too.

I’m not sure if this film profoundly affected me because it stunned me, or if it’s just what I’ve been looking for for a long time. But here’s a thought from my own story:

I have a million feelings toward this planet of ours. But the biggest frustration of them all is that I cannot live multiple lives on this Earth. I can never see the world from any other complete perspective other than my own. I intersect with people at all sorts of junctions. But I will never fully understand anyone. Probably not even myself.

But I will just have to be content with the fact that no one else will have that insight either. And that at least I got to see 90 minutes of people I could not have met otherwise.

It was a pleasure to meet you.

HUMAN by Yann Arthus-Bertrand is available for free viewing on Youtube. In 2015 it premiered the day it what shown at the United Nations Assembly. It was shot in 60 countries over 3 years. The full extended film includes 2,020 people in 63 languages.

This was in response to Part 1 of the film.