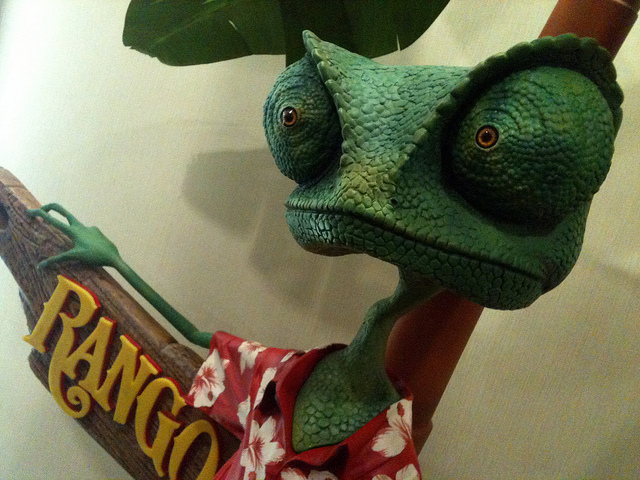 Rango is a pet chameleon and an aspiring thespian. He lives in a safe glass cage with his “friends”: a plastic wind-up goldfish, the torso of a headless Barbie, and a dead cockroach. However, his sheltered life takes an unexpected turn when the car he is travelling in takes an unexpected swerve, flinging him into the centre of the Nevada desert and straight into Dirt, an Old West town, populated by desert animals. Suavely and smoothly, Rango blends in quickly with the townsfolk (he is a chameleon, after all), and is soon promoted to the rank of Sheriff. Between solving the mystery of the town’s disappearing water (Chinatown parody anyone?) and getting entangled in deadly shootout challenges, Rango must also come to terms with his own identity, and hopefully win the heart of Beans (his reptilian love interest) along the way.

Rango is one of those movies which prove that animated films are not exclusively for children. This feeling came across quite strongly when I found myself more captivated by the moving animals on the screen than the kids in the audience, who were exhibiting signs of ADD barely half an hour into the film. This might be attributed to the unconventionally designed characters – though rendered in exquisite 3-D detail, don’t expect cuddly Nemo-type characters to turn up here. Moreover, some of the jokes might be appreciated better by older viewers – such as Rango’s barely disguised stereotyping of Native Americans – but there is enough slapstick humour to go around for the young ones. Other highlights of the film include a quartet of owls with Mexican hats and accents, acting out the part of Greek chorus and warning the audience that the protagonist’s death is ever looming (though, obviously, we never expect it to really happen), to the accompaniment of guitars and accordions. Rango is also permeated by the influence of Native American folklore, as embodied in ancient cacti that drift slowly in the direction of water, and the enigmatic Spirit of the West, who appears to Rango at a brief moment of epiphany.

Excellent graphics and music aside, one complaint I would make of this film is its length, which stands at approximately two hours – one feels that various scenes would definitely have benefited from further editing. I could also moan about the predictability of the plot in some instances (the “revelation” of the villain’s true identity, for example) but this was overshadowed by brilliant action sequences, well developed characters, and the overall charming, lively atmosphere of the film. One last word for those of you who are planning to watch it – don’t forget to bring in something to drink, because watching a desert for two hours (albeit a computer-generated one) can really make you feel absolutely parched.