Norwegian Wood, or “I once had a girl, or should I say, she once had me” 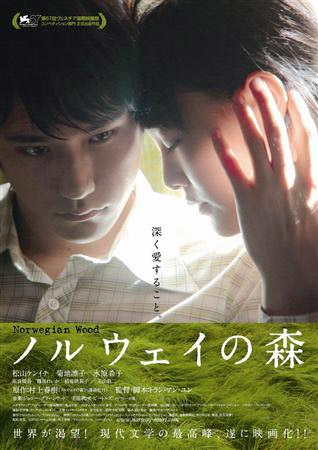 Movie adaptations of popular novels are often dangerous things. In particular, French director Ahn Hung Tran’s decision to turn Haruki Murakami’s classic title Norwegian Wood into a movie, twenty-three years after its publication, struck me as an exceptional feat of courage. Those who have read the book will surely share my qualms. How does one convey the perfect mixture of nostalgia, languor, humour, and isolation, in other words, the quintessence of the novel, onto the silver screen? It was therefore with great trepidation that I entered the cinema.

The premise of Norwegian Wood can be summed up by the first line of the Beatles song: “I once had a girl, or should I say, she once had me.” Toru, a university student, unexpectedly meets Naoko, a childhood friend, in Tokyo. They thus begin an uneasy relationship, plagued with the ghost of Kizuki, a mutual friend who committed suicide at seventeen. Along the way, Toru also develops feelings for Midori, a straight-talking, eccentric figure who, in the aftermath of her father’s death, tearfully asks Toru to bring her to the “dirtiest porn movie there is”. At the same time, Naoko’s mental stability begins to disintegrate and she transfers to a secluded asylum in the woods. Under these circumstances, characters struggle between reconciling their past with the future, while the present gradually spirals out of control.

Despite my initial expectations, I was actually pleasantly surprised. The movie is certainly beautiful to look at: Tran reproduces the unique vibe of the Japan of the 1960s, both artistically and musically, with the use of saturated colours evoking the shades and tone of a faded Polaroid. Scenes hence seem to alternate between a late-afternoon sepia and the cold ice-blue of the snowy forest. Nostalgia permeates each aspect of the film, but never in excess, and the resulting effect does not strike one as being too polished (unlike Tom Ford’s recent film A Single Man (2009) which received criticism for its too frequent resemblance to an advertisement for perfume).The plot unravels languorously with painstaking control and restraint, but there is a constant and underlying feeling of fragility, the sense that things are liable to breakdown completely at any moment. Particular mention should be given to the intricately constructed character of Naoko, whose inner battle with reason and emotion result in devastating yet poignant consequences.

This is, perhaps, one of those films that becomes more engaging if the viewer already possesses the information, and more crucially, the mental image conjured by the original source material; an awareness of the book’s complexities would thus add greater significance to the varying strands of narrative that permeate the film. Tran achieves the difficult challenge of showing and not telling, and to unsuspecting moviegoers the plotline might be hard to follow as a result. Nor is the occasional histrionic outpouring easy to digest for some (especially, as one reviewer said, if you have ever shouted “Get over it” at the screen). However, if you have done your homework so to speak, be assured that Norwegian Wood is an accurate representation of the novel, which is the highest commendation this reviewer can imagine.