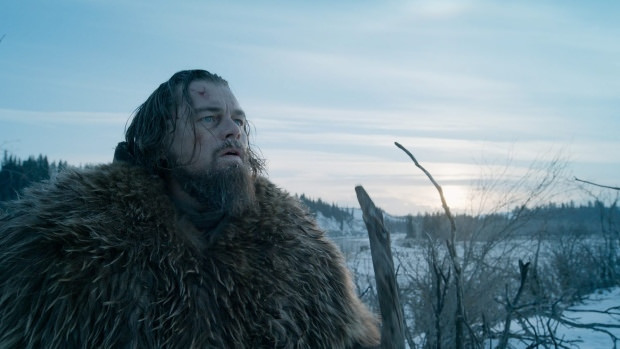 Leonardo DiCaprio in The Revenant

If Leonardo DiCaprio doesn’t receive an Academy Award for his phenomenal performance in The Revenant then there is officially no justice in the world. Having unfairly missed out for his astounding performances in The Aviator in 2005 and The Wolf of Wall Street in 2014, this surely has to be his year! DiCaprio has faired much better at the Golden Globes Awards, having been nominated eleven times, winning Best Actor for Titanic in 1997, Catch Me If You Can in 2002 and Django Unchained in 2012. However, let’s face it, the Golden Globes are merely a warm up to the two main events: the BAFTA Awards and The Oscars.

I admit my obsessive love for the man renders me ever so slightly biased. However, forgetting for a moment his dreamy exterior, it can’t be denied that the intensity and emotional commitment he brings to his roles is unparalleled. DiCaprio is known for choosing roles that require him to push boundaries emotionally, delivering impassioned performances that reach psychological extremes. The Revenant is certainly his most extreme yet; he is a marvel in what acting can achieve. The film is grueling in every sense of the word. The audience experiences a relentless, gut-wrenching tension, which doesn’t let up for the full two and a half hour spectacle. We follow DiCaprio’s character, Hugh Glass, who after having witnessed his son’s death and been left for dead, ferociously clings on to life in a determined mission to hunt down and kill the man responsible (John Fitzgerald, played by the brilliant Tom Hardy). The harsh and strikingly beautiful landscapes, remarkably authentic costume and make-up, gripping story line, and most of all the savagely visceral performance given by DiCaprio and Hardy, combine to create a cinematic experience that you won’t forget in a hurry.

Why is it that watching DiCaprio on screen is always such a thrilling experience? He seems to possess a powerful gravitas that can draw you in and command the screen. Even within visually groundbreaking and dazzling films, such as The Great Gatsby, Titanic and The Wolf of Wall Street, all eyes remain fixed on him. It’s no wonder that the world’s most famous and illustrious directors, including James Cameron, Martin Scorsese, Steven Spielberg, Baz Lurhmann and Quentin Tarantino have snapped him up to star in their big-budget extravaganzas. Although his golden locks and indisputable gorgeousness are undoubtedly factors in his appeal, it is his piercing performances and enigmatic persona that gets hearts racing. It is these factors that are responsible for his enduring appeal and worldwide popularity with people of all ages.

DiCaprio has given audiences so many unforgettable performances in a highly diverse array of films. In celebration of his astounding career, let’s take a trip down memory lane and review some of his most memorable and exceptional performances.

Kick starting ‘Leomania’ in the 90s, Titanic, released in 1997, was responsible for rocketing the 22-year-old teen heartthrob’s career into the stratosphere. He not only solidified his status in cinematic history, but also in the hearts of women worldwide. DiCaprio played the loveable and free-spirited Jack Dawson, whose iconic floppy hair-do and boyish charm proved to be irresistible. Almost 20 years on Titanic remains as iconic as ever. Mention his name, and the image of the younger fresh-faced DiCaprio, sketching Rose with ardent glances or shouting “I’m King of the world!” is never far away in our imaginations.

Released in 2005, Martin Scorsese cast DiCaprio to depict the early years of the legendary film director and pioneer in the aviation industry, Howard Hughes. The supremely stylish biopic is set in the Golden Age of Hollywood, featuring well-known and iconic female actresses such as Katherine Hepburn (Cate Blanchett) and the sultry Ava Gardner (Kate Bekinsale). His character is the first of his roles as an outrageously rich, big shot tycoon figure – a role he is particularly suited to given his on-screen magnetism and aura of old-school charm and sophistication. Fans of DiCaprio will be in their element. Hughes, the young entrepreneurial genius is tormented with an ever-growing condition of OCD that gradually takes over his mind. DiCaprio perfectly captures the agitating and frustrating nature of the condition, delivering a performance with a psychological complexity and subtlety that captivates from start to finish.

Catch Me if you Can

DiCaprio seems to be drawn to roles that feature characters possessed by secrets hidden under a polished and smooth persona. His role as Frank Abagnale in the biographical crime drama (directed by none other than Steven Spielberg) is the epitome of this dynamic. Abagnale accumulates millions by forging bank checks under numerous false identities. He becomes a pilot, a doctor and even a lawyer… Yes that’s right, the film features a young DiCaprio strutting around in a pilot’s uniform! His audacious impersonations and innovative methods of escape are incredibly exciting to watch. It is also worth noting that none other than Tom Hanks plays the detective, Carl Hanratty, who devotes his life to catching the artful runaway. The timeless dynamic between detective and criminal is perfectly executed with a tangible chemistry between DiCaprio and Hanks that is fantastic to watch.

The fact that Leonardo DiCaprio has never won an Academy Award is absolutely baffling to me. However, after witnessing his startlingly good performance in The Revenant, I feel certain that this is his year. I await the BAFTA Awards on the 14th of February and The Oscars on the 28th with very high hopes. Yet even if by some incredible chance he misses out, he will still remain the biggest, best, and (for me anyway) sexiest star in the film industry.