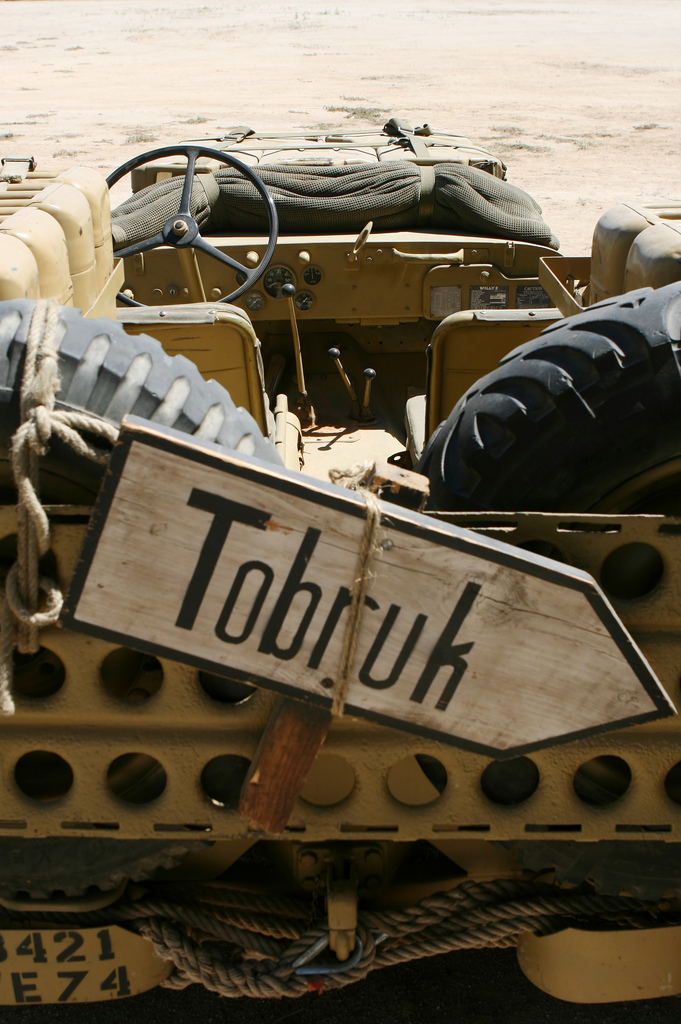 Tobruk: An Iconic Scene From the War in the Desert and the Background for Ice Cold in Alex (1958)

Distributed by Associated British Pathe, Ice Cold in Alex initially appears to be a typical black-and-white 1950s British war film that exhibits the hallmarks consistent with this staple genre of the period. This was a low budget British film in contrast to the more ambitious Anglo-American collaborations that were to ensue in the 1960s, such as The Great Escape (1963), 633 Squadron (1964), and Operation Crossbow (1965). Although shot outside of the confines of the studio, there is still a notable absence of extras or troops being depicted fighting amidst massive combat scenes in Ice Cold in Alex. Significantly, this was also the decade that saw the “British War Film” as a recurring theme in post-war British cinema, with productions including The Cruel Sea (1952), The Dambusters (1955), and Above us the Waves (1957) all appearing around this time.

Moreover, in the 1950s a substantial number of films can be identified as incorporating the trope of the male lead as central plot mechanic, or namely where the leading character experiences an enigmatic journey through adversity as the plot progresses. Two further examples of this, aside from Ice Cold in Alex, are The Long Memory (1952), which also stars John Mills, and Hell Drivers (1957) starring Stanley Baker and Sean Connery. Ice Cold in Alex does not differ from this premise; it offers a similar moral in that the central character, Captain Anson, as played by John Mills, displays an overwhelming devotion to duty despite underlying hints of alcoholism. There is further a compelling ring of authenticity about the film that can be attributed to the fact that it was based on the novel by Christopher Landon who also served with the 51st Field Ambulance corps in North Africa during the Second World War. The initial attraction of Ice Cold in Alex is its story of daring and determination that serves as a testament to the bravery of Second World War combatants in North Africa, but as the plot develops any other similarity to the “British War Film” of the 1950s ends; an entirely different film emerges, committing a serious taboo in daring to show an alternative to the standard perceptions of the British stiff upper lip, class, and tradition.

What makes Ice Cold in Alex so different is its slightly satirical tone, reflecting the emerging new strain of comedy within British culture at the time. The commanding officer seen here does not stand on ceremony and is later blown up in an almost farcical display of eccentricity and heroism, waving his fist at the enemy as his batman drives their car towards the approaching enemy ranks. A memorable scene is observed in the final moments of the film in a bar in Alexandria, where characters await the titular ice cold lagers; not only is it a striking example of informal union between survivors, despite differences in rank and creed, but it is also a climactic statement to the effect that the delineation of rigid class differences was slipping in a world of shifting cultural values. For John Mills too, this is a grittier and less gentlemanly role than his previous pictures (with the exception of Anthony Asquith’s A Cottage to Let (1941), where he played the role of a double agent). Throughout Ice Cold in Alex Mills’ character is often depicted as on the edge, unkempt, and dependent on alcohol. This gritty, dishevelled appearance is to a certain extent reminiscent of his role as the submarine captain in Asquith’s We Dive at Dawn (1943), but even in this previous characterisation Mills retained his gentlemanly integrity.

Despite the film’s original style and unique glimpse of the war in the desert, the enduring tragedy of the loss of human life is never far away. And despite his strained, even shocking temperament, Mills’ Captain Anson exhibits a stirring moral determination as the commanding officer fulfilling his mission at all costs. An air of mystery further subverts the notions of the genre with the addition of Anthony Quayle to the plot, coming to the assistance of Mills and his company and claiming to be a Dutchman; this figure is, however, not quite what he initially seems. Following tragedy and a tremendous feat of endurance, the film culminates in Alexandria and character differences are ultimately overcome.

The iconic ending of the film in the bar at Alexandria has been immortalised in cinematic history and has even been made into a television advert. A nice touch can also be observed here as Mills’ character is scolded by a junior officer for fraternising with an enemy, only for Mills to disregard the rebuff with a humorous retaliation. Ice Cold in Alex emerges from the archetypal traits of the “British War Film” and anticipates the advent of the 1960s and the questioning of classic values. Not only does the film satirise traditional motifs, but it further blurs the lines between reductive definitions of good and evil as it is the desert, rather than the German army, who appears here as the true enemy. Consequently, the film becomes a reflection of the changing cultural face of Britain in the late 1950s.

The film carries a reasonably happy ending, but not without that loss of life which seems to be a feature of director J. Lee Thompson, something that occurs most notably in his big-budget production The Guns of Navarone (1961). Ice Cold in Alex is a compelling portrayal of the Second World War, in that despite the cinematic conventions of its era it is one of the first British films (with the possible exception of The Cruel Sea) to show a decadent and raw side to leadership. Its contemporary success was acknowledged by recognition at the International Berlin Film Festival, and Ice Cold in Alex remains both an enduring critical and popular favourite, and a worthy testament to those who fought in, and endured the hardships of, the North African desert during the Second World War.