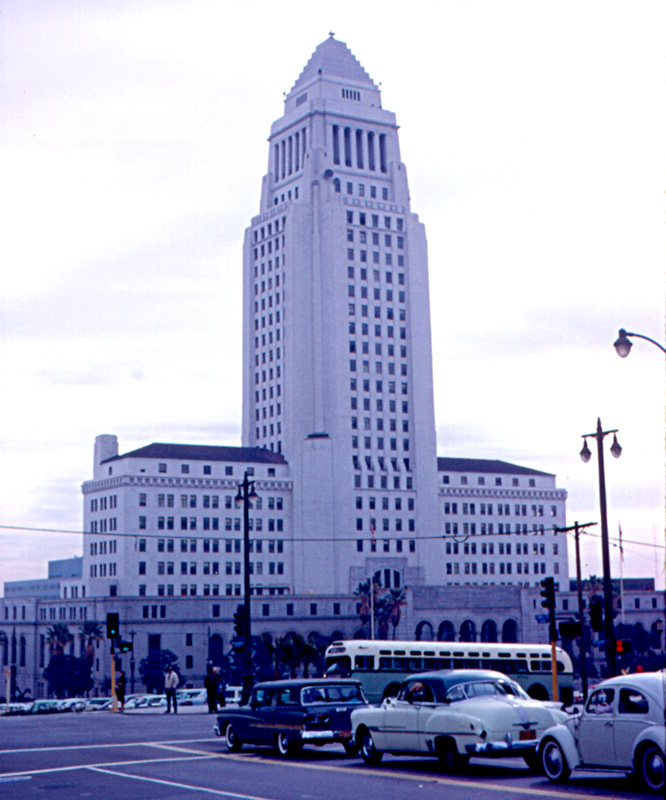 Los Angeles City Hall, the home of the gangster squad.

In a city where double-breasted bad guys are taken down by equally dapper LA cops, life’s all fun and games until someone gets blood on his suit. Gangster Squad is a true example of style over substance, and the audience is left wishing its gangsters had as many layers as their snappy outfits, since everyone is painfully one-dimensional.

Apart from the cool L.A. Noire feel, the film fails on many fronts, the biggest problem being that Gangster Squad is almost a carbon copy of Brian De Palma’s The Untouchables. Chicago becomes Los Angeles, as a handful of cops who have had enough go black ops in order to take down the bad guys. Kevin Costner’s Elliot Ness makes room for Josh Brolin, who plays Sergeant John O’Mara; he’s tasked with putting together a unit to take down crime boss Micky Cohen. Sound familiar so far? The only problem is that Brolin is a bit slow, so his wife has to step in and help him out here and there. Apart from this speed bump, the rest of the film follows suit, with old-timer Sean Connery being replaced by another seasoned gentleman, and the lovable rogue character originally played by Andy Garcia becomes Michael Pena – who, despite being a wonderful actor, does very little here except be referred to as ‘son’ or ‘that Indian kid’. Finally, The Untouchables had one brainiac, and so Gangster Squad has Giovanni Ribisi. Needless to say, all the characters come to the same end as their untouchable counterparts.

Is this latest rehash a sign of the times? Hollywood, it seems, is running out of ideas, and the last couple of years have been a non-stop stream of sequels, prequels, reboots, and remakes. Comic book adaptations and horror films have dominated this trend, from Captain America and The Amazing Spider-Man, to the never-ending money-spinners of Scream 4, Paranormal Activity 3 and 4 and Fright Night. When Michael Bay promised to give us a Transformers trilogy, we were all able to breathe a collective sigh of relief after Dark of the Moon, but I’ll be damned, there is another sequel in pre-production. The action movies were pretty diabolical too, with the Expendables 2, Fast & Furious 5, and Total Recall, which was a total disaster. What’s more, 2013 looks to be the biggest year for remakes yet, with the count already at 50 and rising, with Dredd, Carrie, Robocop, and Annie (please no!), to name just a few. Most of the remakes we see over the years are ideas taken from foreign films, and so many of us won’t even realise we’re watching a reboot – such as Jim Sheridan’s 2009 Brothers, which is simply Susanne Bier’s 2004 Danish film of the same name. Are The Hunger Games just a bit too similar to the Japanese Battle Royale for it to be a coincidence? The answer’s yes, though I should quickly add that not all remakes are a bad thing; the Coen brothers’ True Grit was sensational.

But, back to the film at hand. What exactly does Gangster Squad’s great ensemble cast do? Sean Penn’s nasty Mickey Cohen would be more frightening if he didn’t look like a Maybelline make-up ad gone wrong; his face gets heavier and heavier as the film progresses, until we start to wonder how the poor guy is holding his head up at all. The rest of Cohen’s motley crew are equally odd looking; it may be that the director doubted the audience’s ability to tell the good guys from the bad, so all Cohen’s men are oddly disfigured – a dodgy eye here, an ugly face there. None of them have any redeeming qualities. Emma Stone channels a Black Dahlia meets Jessica Rabbit look, but, great clothes aside, isn’t given much to work with apart from a cigarette, and so we fail to empathize with her damsel in distress routine. Other good actors were left with little to do, such as Anthony Mackie, who was great in The Hurt Locker but has few lines here. Not even Ryan Gosling could brighten up the film; his chemistry with Stone was tepid, mostly as her character was a little difficult to follow, and the audience was never made to understand why she would be with the terrible Cohen. Luckily Gosling looks so good throughout the film that it really wouldn’t matter if he didn’t have any lines at all.

Ruben Fleischer directs the film, and although I greatly enjoyed the bullet-ridden roller coaster he gave us in Zombieland, the same can’t be said of Gangster Squad. It is certainly bullet-ridden – someone is shot every other minute – but as far as any other drama or characterisation goes, the film is lacking. Fleischer is more akin to comedies; he’s directed many Funny or Die shorts and the hilarious Between Two Ferns with Zach Galifianakis, which never get old. His next film looks to be a return to the comedic genre with Zombieland 2 – you guessed it, another sequel.