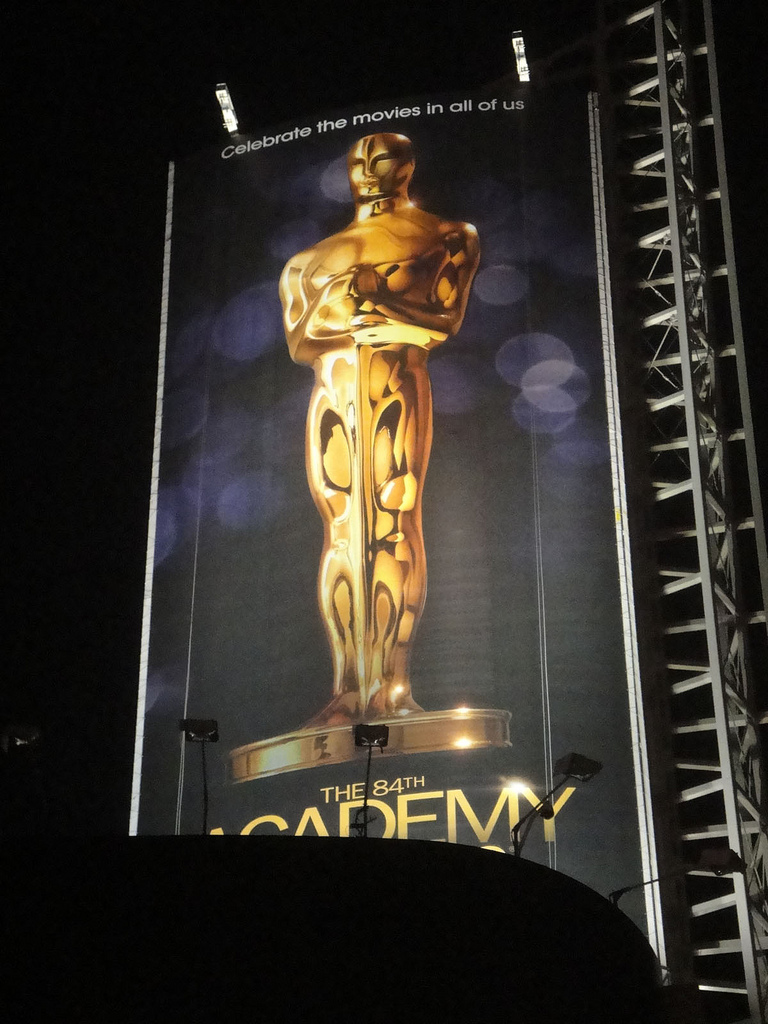 Thankfully, the statues aren’t this big in real life…

2012 was the year of the Olympics, the Jubilee, and the apocalypse which never happened. It was also the year a French film took the Oscars by storm, sweeping aside the competition to win five awards, to the surprise of absolutely no-one. This year, however, the race to lay hands on those golden statuettes is far from decided, with numerous films in the running for the top awards, and so many questions still to be answered. How will Seth MacFarlane fare as host? Will Katniss Everdeen – sorry, Jennifer Lawrence – win Best Actress? And can any mortal man challenge the mighty Daniel Day-Lewis? Since the nominations haven’t been announced (at the time of writing), I can’t answer any of these questions, but here are five things which I believe are likely to decide the outcome of the 2013 awards.

The Toronto International Film Festival has arguably eclipsed the more glamorous Cannes Film Festival to become the most important festival in the calendar, and this becomes particularly evident during awards season. Two previous Best Picture winners, Chariots of Fire and Crash, had their world premieres at the festival, whilst American Beauty, Slumdog Millionaire, and The King’s Speech started to gain attention in Toronto after their initial premieres elsewhere. 2012 was no different, with Ben Affleck’s Argo and David O. Russell’s Silver Linings Playbook just two of the front-runners which held their first showing in Toronto. These aren’t the only Toronto premieres to keep an eye on come February 24th, however, for Amour, The Master, The Sessions, The Impossible, and Rust and Bone, though unlikely to triumph in the Best Picture race, could all threaten in the acting categories. The challenge for Argo and Silver Linings Playbook is to hold onto their early advantage in the face of the late season arrivals, something which the latter has cleverly achieved; by starting with a limited release in the US and gradually expanding to more cinemas as awards season edged closer, the film has constantly reminded Academy voters of its presence, and this could pay dividends on the night.

Whilst sci-fi thrillers such as Looper and Prometheus looked to the future for a story, 2012 also provided us with some excellent instances of cinema delving back into the murky depths of the past, and, looking at the probable Best Picture nominees, the Academy looks set to recognise this trend. There’s quite a distinction between the ways history is represented this year: for instance, both Lincoln and Django Unchained focus on the Civil War era, but that’s about as far as the similarities go. Neither film simply retreads old ground; Day-Lewis’ portrayal of Abe has been lauded for emphasising the mortality and fallibility of the 16th POTUS, whilst Tarantino’s depiction of plantation-era Mississippi is brutal, bloody, and decidedly unrestrained – in short, everything you would expect from the man. Furthermore, two films in the Best Picture race have used lesser-known parts of US history as inspiration, drawing on recently declassified military reports for their tales. ­Argo depicts the daring escape of US diplomats from revolutionary Iran, whilst Zero Dark Thirty documents the hunt for, and capture of, Osama Bin Laden, earning rave reviews even as politicians have denounced it for ‘creatively reimagining’ the story. The director, Kathryn Bigelow, will be hoping that history repeats itself after her triumph with The Hurt Locker three years ago, but Lincoln is a favourite to do what Oliver Stone’s JFK couldn’t, and take home the top prizes for a presidential biopic.

Once, the name Harvey Weinstein meant very little to me; it was just another name on the giant Fellowship of the Ring poster which adorned my bedroom wall. Now, I know him as one of the biggest movers and shakers in Hollywood, with near-unprecedented influence over awards season. Weinstein tasted Oscar success with Shakespeare in Love and Chicago when he ran Miramax Films, and this year, after The Weinstein Company (the company he co-founded in 2005) distributed both The King’s Speech and The Artist, he’ll no doubt be aiming for a hat-trick of wins. His hopes will most likely be pinned on Silver Linings Playbook for the top award, but the film’s more likely success will be in the Best Actress category, if Jennifer Lawrence can hold off Zero Dark Thirty’s Jessica Chastain. The Master is The Weinstein Company’s other top contender, and whilst Amy Adams and Philip Seymour Hoffman are likely to find their way into the supporting categories, leading man Joaquin Phoenix may have denied himself a Best Actor win with his furious tirade against the awards.

Nope, not the Bill Murray film. Given the success of The Artist at last year’s awards, I’d be remiss if I didn’t mention some of the foreign language films which could threaten the dominance of the Hollywood heavyweights. Neither Amour nor Rust and Bone is expected to match the Oscar success of The Artist, but both could feature on the night, particularly in the Best Actress category. Though this is seen as a probable two-horse race between Lawrence and Chastain, Marion Cotillard’s performance could win Rust and Bone a solitary nomination, and with Emmanuelle Riva regarded as a definite challenger, the 85 year-old star of Amour could become the oldest Best Actor/Actress nominee of all time. Some critics are suggesting that Amour may sneak onto the extended Best Picture list, and writer-director Michael Haneke could win nominations for Best Director and Original Screenplay, but given the quality of the competition, my suspicion is that the Austrian film will only earn itself the Best Foreign Language Film accolade.

A category I’ve named in honour of the 2011 awards, when Tom Hooper somewhat surprisingly netted himself the Best Director award to go with the film’s Best Picture triumph, upsetting the many fans and critics who thought David Fincher was a sure bet for The Social Network. On reflection, however, Fincher can’t feel too aggrieved, for the unspoken law of the Academy is that Best Director and Best Picture must be won by the same film. Between the 2004 awards and the 2012 ceremony, only once did the two awards go to different films; in 2006, when Crash’s Best Picture win denied Brokeback Mountain and its director, Ang Lee, the chance to continue the trend. Lee could be back this year, having helmed the visually stunning Life of Pi, and he’s not the only former Oscar-winning director who could feature at the 2013 ceremony. Bigelow, Hooper (who has followed up his 2011 triumph with Les Miserables), and Steven Spielberg all have an Oscar or two in their trophy cabinet, and even Ben Affleck, another possible nominee, can boast an Original Screenplay win. Continuing this trend will be a challenge, but if any film can do the Picture/Director double again, then my money would be on Lincoln – but then again, with the variety and quality of films on offer, the 85th Academy Awards might yet surprise us all.