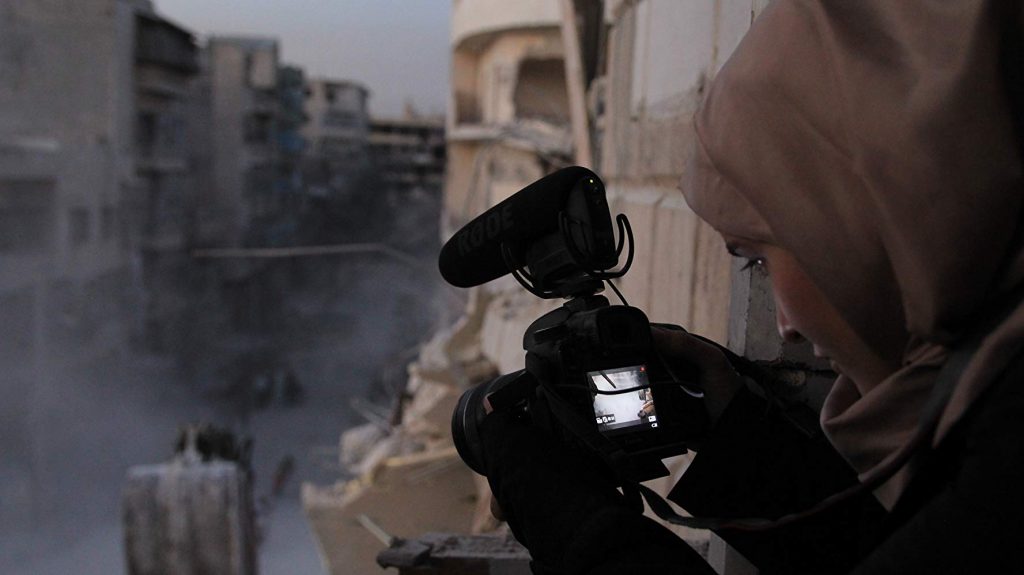 Image by Channel 4. Available on IMDb under Creative Commons 2.0 license

In the context of further heightening tensions between the US and Iran, and the turning of attention to Trump’s twitter wars and Boris’s half-hearted condemnation, it is imperative that films like ‘For Sama’ are made to remind the world of the everyday, endless suffering of victims in the Middle East. The documentary traces the personal and political life of economics student turned film maker Waad al-Kateab and her husband Hamza, a selfless doctor who dedicates himself to saving the lives of those injured by the regime. A self professed ‘love letter’, this film is dedicated to the couple’s adorable baby Sama, as her mother attempts to explain to her, and consequently the rest of the world, the injustice in Aleppo and why they stayed so long to fight it. Despite the continuous escalation of chaos, violence and war, love remains constant throughout this intimate footage, be it love between the couple, for their child, their community or their country. It is a film which appeals to both common humanity and despair, is both beautiful and disgusting, and has therefore unsurprisingly achieved worldwide audience appreciation and critical acclaim.

However, for a film so widely regarded it is ironically extremely painful to watch. Waad does not hold back from displaying the close ups, with multiple scenes of dying children as a result of foreign airstrikes, grieving parents at the moment of realisation they have to bury their child and collections of dead bodies, massacred by the soldiers. A particularly gruelling scene is that of a mother, injured from an attack, undergoing an emergency c-section only to produce a sheet-white, lifeless baby. The doctors, however, determined to preserve both lives, desperately help, shake and perform CPR on the baby. Yet after minutes of no response, and both the audience and doctors starting to think the baby will not make it, we see the baby gasp for breath – a moment of hope in these hopeless surroundings.

Throughout the film, there is a strong focus on mothers and babies, and the raising of children in a society being actively destroyed around them. Waad asks the child of her friend what happened to her today, and she replies casually ‘there was a cluster bomb’, before resuming eating her dinner. Not only is this child immune to the repetitive occurrence of bombing, but her everyday, limited language includes a full understanding of weaponry. The children do not receive bedtime stories and lullabies, but are told stories of friends and neighbours dying and go to sleep to the sound of airstrikes and explosions. In her narration, Waad herself explains that it breaks her heart that Sama does not shudder at the sound of bombs like other children, for she was born into a world where they have been normalised and knows no different.

As well as the vulnerability of the children, the film highlights the vulnerability of those actively resisting or staying in their home city. Seven out of eight hospitals in Aleppo were bombed by the Russians between 2012 and 2016, the time period in which Waad was recording. Images of ill patients being attacked for a second time and doctors killed trying to save babies lives scatter the film, and the cutting off of hospital water supplies make the doctors admirable and wholehearted attempts seem futile. These attacks seem inexplicable – how could doctors, five month old babies or ill patients be threatening to any party involved in this complex war, be it Assad, Russia, US or ISIS?

Yet however gruelling certain aspects of the documentary may be, it is extremely compelling and insightful. In today’s world, we can often lapse into a sense of detachment; if these issues are not directly affecting us, while we sympathise, we do not necessarily care. ‘For Sama’ breaks down this barrier of detachment, showing how Syrian victims love and live just like us, but unfortunately against a much harsher and violent backdrop. It is a film that will engage you, make you cry and love the characters, although in this instance they are not characters, but real people, representative of millions of victims. A film made for young, innocent Sama, but is really intended for the rest of the world, who are youthful and naïve towards the actual truth and terror of the war in the Middle East.

(Available to watch on All4)