Don’t You Forget About Me 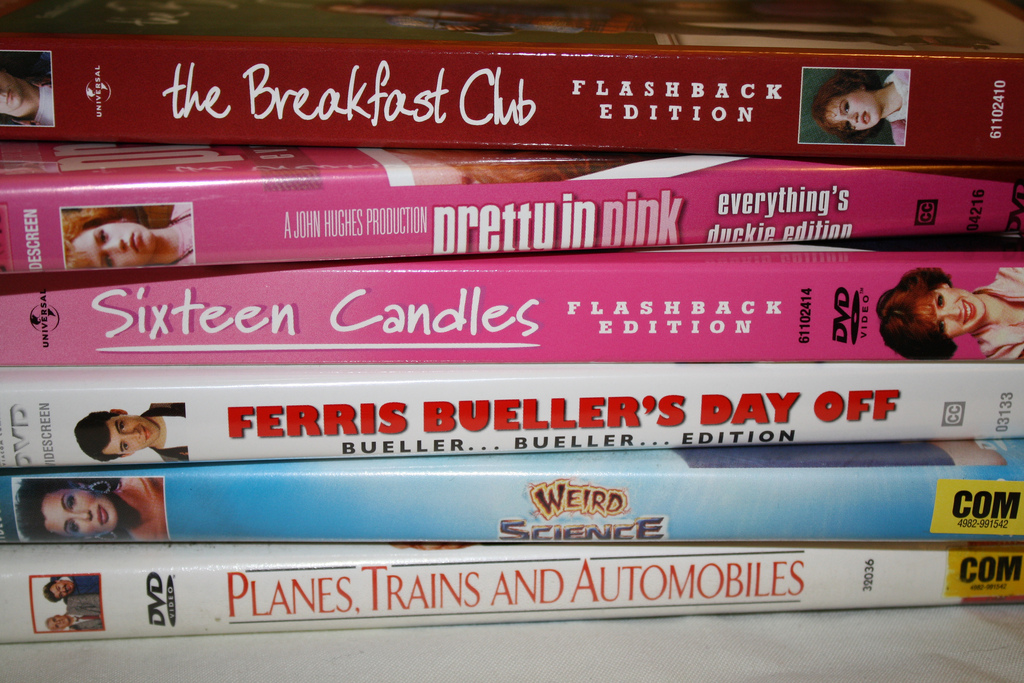 John Hughes wrote and directed many films, but these remain his most iconic.

“Whatever happened to chivalry? Does it only exist in 80s movies? I want John Cusack holding a boombox outside my window. I want to ride off on a lawnmower with Patrick Dempsey. I want Jake from Sixteen Candles waiting outside the church for me. I want Judd Nelson thrusting his fist into the air because he knows he got me. Just once, I want my life to be like an 80s movie, preferably one with a really awesome musical number, for no apparent reason. But no, no. John Hughes did not direct my life.“

These are the sentiments of Olive Penderghast, the teenage protagonist of the 2010 film Easy A, the film which introduced me to John Hughes. My first encounter with the work of an auteur who embodies the American 80s as much as Madonna, Coca Cola, or Ronald Reagan began only after watching Easy A, which, though a good film in its own right, owes a large, self-acknowledged debt to the work of Hughes. Happening across the work of director as noted as Hughes in such a way left me wondering about the legacy of his work, and just how strongly his influential films resonate in modern creations.

Hughes’ cultural legacy is apparent in everyday life; films such as The Breakfast Club and Ferris Bueller’s Day Off are frequently quoted, having long ago permeated our cultural consciousness. Numerous popular television shows have referenced his films; Dawson’s Creek featured an entire episode in which the four leads spend a Saturday in detention, whilst both One Tree Hill and Scrubs have paid homage to Sixteen Candles. Dan Harmon was so confident in the enduring appeal of Hughes’ work that the pilot episode of his brilliant Community was built around a series of references to his films. You can even buy “Save Ferris Bueller” t-shirts online.

However, it is rather more difficult to decipher Hughes’ cinematic legacy, for numerous reasons. It is important to note that he did not single-handedly put the high school teen comedy-drama on the map; others such as American Graffiti had come before to set the foundations of the genre. Nor was Hughes a one-trick pony, for his extensive career of writing and directing includes other favourites including Planes, Trains and Automobiles, Uncle Buck, and Home Alone, so basing his legacy purely on his output in the mid-80s does him a disservice. But he is renowned for his high school age films for a reason, and the period from 1984 to 1987 – which produced Sixteen Candles, The Breakfast Club, Weird Science, Pretty in Pink, Ferris Bueller’s Day Off, and Some Kind of Wonderful – is why he remains the voice of a generation.

In terms of cinematic tropes which Hughes helped popularise, Easy A offers a handy reference guide because it ticks all the boxes of a Hughes film, starting with the eminently likeable lead character. In Emma Stone’s portrayal of Olive, replete with incontrovertible wit, we find strong echoes of Samantha Baker, the sardonic protagonist of Sixteen Candles facing a birthday forgotten by her family. It’s worth nothing that whilst Ferris Bueller would probably capture the title of favourite Hughes lead character, Hughes’ partnership with Molly Ringwald certainly helped popularise the strong, smart, and sassy female lead which forms the bedrock of later films such as Juno and 10 Things I Hate About You. Whilst dwelling on Hughesian characters, Easy A also manages to work in the handsome yet sensitive guy reminiscent of Jake Ryan from Sixteen Candles, and the Antony Michael Hall-esque character who struggles with the harsh realities of high school.

It’s not just the characters of Easy A who are lifted from the John Hughes playbook, however. Director Will Gluck freely admits to as many as twenty individual references and homages to Hughes, most notably the music, including If You Were Here from Sixteen Candles, and the iconic Don’t You (Forget About Me) which, for many, is the musical signature of Hughes’ work. Even individual shots are lifted from other films, as Olive’s shower mohawk and guitar practice are near-identical repeats of shots from Ferris Bueller’s Day Off.

Hughes may be venerated for his indelible imprint on modern culture, his vivid characters, or even the sheer entertainment value of his films. For me, however, the most crucial aspect of Hughes’ mid-80s films is something which Easy A pays homage to more effectively than the music or the characters; the fact that Hughes’ films have a heart. Quite simply, they care about the teenagers they focus on. In creating his characters, Hughes was able to capture the zeitgeist of the era whilst remaining sympathetic to and respectful of the generation they represent. Compare this to Amy Heckerling’s satirical Fast Times at Rigdemont High, which arguably does as good a job at representing the high school experience, but is decidedly less sympathetic to its characters in doing so. Perhaps this is the greatest reason behind the enduring appeal of his films, then, is the fact that the pains and pleasures of teenage experience are universal, and in dramatising them so effectively, Hughes ensure that his films would be revered by all generations.

It seems fitting to conclude with the words of someone who worked with Hughes – Alan Ruck, still best known for his role as Cameron Frye in Ferris Bueller’s Day Off: “Teen comedies tend to dwell on the ridiculous, as a rule. It’s always the preoccupation with sex and the self-involvement, and we kind of hold the kids up for ridicule in a way. Hughes added this element of dignity. He was an advocate for teenagers as complete human beings, and he honoured their hopes and their dreams. That’s what you see in his movies.”