A Look at Clint Eastwood’s Contribution to Cinema: In Front of the Camera 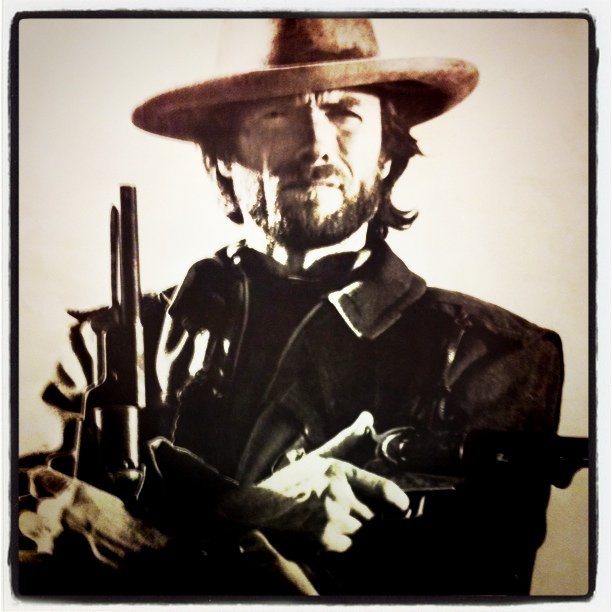 Clint Eastwood as The Man with no Name

Clint Eastwood is a figure with many cinematic faces: the Stetson-crowned, strangely handsome appearance of The Man with no Name; the sunglasses-clad sneer of Harry Callahan kitted out with a sharp suit and a 44. Magnum, and the time-ravaged scowl of Frankie Dunn in Million Dollar Baby, to name but a few. From the day he first set foot in front of the camera in 1959 as Rowdy Yates in the television series Rawhide, to his most recent performance as the unapologetic Walt Kowalski, Eastwood has embodied characters that have defined genres and set new standards for masculinity.

The Wild West is the essence of Eastwood’s cinematic persona. His 6’4 stature, his imposing demeanour, the throaty voice scratched with gravelly overtones, all made him the perfect wandering gunman, the tall dusty stranger who stays aloof and detached until provoked. In 1964’s A Fistful of Dollars, a solitary white man in a poncho rides a mule casually into a Mexican town .The stranger observes the place through a grimace, his snake-like eyes analyzing every detail with nonchalance. The ensuing opening scenes of Sergio Leone’s violent gem would set the tone for Eastwood’s whole acting career.

A year later a sequel was made: For a Few Dollars More. It saw Eastwood share the limelight with Lee Van Cleef. This seems a strange turn after watching the one-man-show that was A Fistful of Dollars, but on the other hand it did point in a certain direction. It occurred to Leone that by throwing another strong character into the mix, the results were likely to be explosive. All the signs led to a masterpiece: The Good, the Bad and the Ugly. In the final instalment of the Dollars trilogy, Eastwood’s character has matured somewhat. Of course, he is still the same laconic, unshaven outlaw he always was, although instead of his usual mould-green poncho, he sports a long, sandy trench coat. His discomforting slit-eyed contortion can be seen as compassionate in some cases, indeed; there is an air of sympathy about him in several scenes. The meandering web of events chronicles the insidious nature of man, a nature underscored brilliantly with one of Eastwood’s final lines as “Blondie”: ‘I’ve written the name on the bottom of this stone.’

In High Plains Drifter, Eastwood added a new dimension to his acting; the days of that young, wise-cracking kid were gone and in this film, you can see how the actor had cultivated his craft to add a disturbing, darker edge to his portrayal of The Stranger in this 1973 classic. Three years later, in The Outlaw Josey Wales, Eastwood’s performance was for the first time acclaimed on a critical level; he displayed an overriding sense of anger and thirst for revenge, which in turn were replaced by a smiling tenderness and vulnerability when he becomes acquainted with Laura Lee (played by Sondra Locke). This new level of maturity in Eastwood’s acting brought out a different, more fragile side to his depiction of the macho loners he had become known for.

1985 saw the release of Pale Rider. Eastwood here stars as The Preacher, a dubious clergyman who is just as comfortable with a Smith & Wesson in his hand as he is with the Good Book. As the leading man takes on a religious and less hostile approach to his performance, there was an aura of compassion about him, a feeling of humanity that was so often absent in the genre. But the gem in Eastwood’s acting crown was not to be achieved until seven years later. In 1992, an older Eastwood led a stellar cast in Unforgiven. The role earned him an Oscar nomination, and was a portrayal of utterly raw human emotion. The transition of his character, William Munny, from modest landowner to malevolent killer, surely ranks as one of the greatest performances in the Western’s long history.

For the toughest and manliest man in Hollywood to take on comic roles may seem an almost farcical proposition at first, but in actual fact Eastwood could pull off comedy with aplomb. In Any Which Way but Loose and Any Which Way you Can it was often said that Clyde the orang-utan stole the show. But Eastwood was the straight man. The actor had a natural comedic air; straight-talking as always, the silence after one of his wise-cracks could bring a chortle out of the gravest of viewers. In an equally distinct genre, Eastwood was perfectly cast opposite Richard Burton in Where Eagles Dare in 1968. The portrayal of the quiet, robust and reliable Lieutenant came naturally to the actor, and his performance bounced off Burton’s Britishness excellently. His next notable war flick was Firefox in 1982, where the actor excelled in a film that was quite poorly received by critics. Heartbreak Ridge, unique in its depiction of the U.S. invasion of Grenada in the West Indies, required a performance of quintessence from Eastwood in 1986, and he delivered in this brutal B-movie. The Bridges of Madison County finds Eastwood in one of his most acclaimed roles. Alongside Meryl Streep, he gives a performance of gentleness and subtlety; it was something the world had not seen before from Eastwood; critics at the time remarked how the actor had added layers of personality to the empty-shell character the original novel encompassed.

In the ‘70s the crime genre belonged to Clint Eastwood. His first venture into the cop thriller, however, came in 1968 with Coogan’s Bluff, a story that started in the desert and ended on the streets. It represented the actor’s transition from Old West to new modernity with a total disregard for subtlety, but as far as making an all-action statement to the world that Hollywood cameras were leaving the arid Arizona plains and setting up on the vibrant streets of San Francisco and New York, it didn’t do too badly. In 1971 Eastwood starred in his first fully-fledged police thriller. Dirty Harry was the film and Harry Callahan was the character that defined crime in 1970s’ cinema. He was truly in his element; it was The Man with no Name shooting up felons all over again, only this time it was on street corners, and here everyone knew the man’s name.

Eastwood’s most recent screen performance was in Gran Torino. This time the ageing actor’s character was on the receiving end of crime. Critics queued up to praise the film’s acting, and rightly so. Eastwood plays Walt Kowalski with utter magnetism; he engages the viewer and forces you to empathise with him. You cannot fail to see the rampant emotion behind an exterior that would unnerve the most lion-hearted of Hmong gangsters. Rumours that Gran Torino was Eastwood’s last venture into acting were blown out of the water recently, with news that he will play the lead in his own film Trouble with the Curve, due for release in 2013.