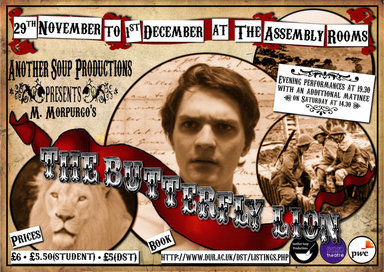 At the final curtain, The Assembly Rooms broke into a veritable chorus of saccharine approval . “Aww, that was so nice!”, cooed one doe-eyed spectator; “Wasn’t that just lovely?”, offered another. They weren’t wrong – everyone who ducked into the theatre from the bitter November frost now had their cockles well and truly warmed.

The Butterfly Lion was one of my favourite books when I was a child, and Michael Morpurgo my favourite author, so getting the opportunity to see a play version was a gratifyingly reminiscent experience on a personal level. A young boy dodges school and is taken in by Millie, an old woman who recounts the story of her late husband Bertie’s journey from childhood on the African veldt to the dark French trenches of the Great War via the vales of green England. His enduring kinship with a white lion, which he befriends in Africa before it is sold to a circus in France, is the story’s principle focus – even if you didn’t get to see it, you can probably guess what happens in the end.

Yet the fact that the narrative is naively predictable doesn’t detract in any way from the play’s emotional impact. Anyone who has seen the sublime adaptation of Morpurgo’s War Horse on screen or stage will recognise a familiar cycle of threat and reconciliation in The Butterfly Lion, tied in with ideas of human-animal fraternity and enduring hope as well as of course Morpurgo’s beloved battlefield panoramas. But don’t think this is just Warhorse set in Africa – it is very much a play with its own identity and soul by the bucket-load. Millie as youthful love interest is the major distinction who lends the play a completely different dynamic, namely a boy-animal romance becoming a boy-girl-animal love triangle.

In my experience, trying to turn a book into a play whilst juggling essays, sports commitments and a respectable social life is nigh-on impossible, so directors Rowan Williams-Fletcher and Sam Foster deserve a big hand. There’s something about Morpurgo’s prose that allows it to transfer so beautifully to the stage, probably the fact that it’s so dialogue-heavy, but nevertheless adapting a book of his is no mean feat.

And now to the production itself. Beth Greenwood and Will Clarke as star-crossed lovers Millie and Bertie both contributed worthy performances as the pair matured from eccentric infancy into adulthood. The cast as a whole performed with an assured if unremarkable solidity, although arguably the characters they portrayed weren’t much to write home about in a theatrical sense. As in Warhorse, humans with puppets took the place of the animals, the lion’s movements choreographed and enacted with professional flair by Izzy Webster using puppets made by Ellen Marshall and Bella Alexandroff.

The whole show presented a kind of simplicity that belied the complex process of putting it together on a technical level: it really was the kind of show that didn’t seem like rocket science to put on, even though it probably was. The whole thing was beautifully soulful, particularly the portrayal of kinship between man and beast; the occasional camp French accent aside, it was a show admirably consistent in tone which flowed with pleasing effortlessness.

With so many of us labouring under the stresses of assignments at the end of this Michaelmas term, what the students of Durham needed was a play that could give you a big hug and whisper “There, there”. The Butterfly Lion did not disappoint: comforting yet thoughtful and at times very funny. Just what the doctor ordered on a frosty November evening.