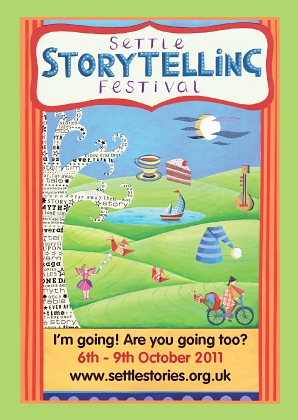 Once upon a time in the North Yorkshire village of Settle, the storyteller Sita Brand decided “to fulfil a long held dream to set up a storytelling festival”, and in October 2010, the first chapter of Settle Stories was opened.

The next episode of this annual storytelling festival begins next month and promises “something for everyone”, with a programme that showcases storytelling talent from around the globe. Taking place between the 6th and 9th of October, Settle Stories 2011 will be bigger than last year’s inaugural festival and offers innovative experimental work alongside traditional storytelling performances.

A passionate storyteller herself, Brand regularly sees the work of gifted performers and is constantly on the lookout for new talent to add to the festival programme. This year, Settle Stories boasts performances from the elite of the storytelling world, including the homegrown tale-telling talents of the UK’s storytelling laureate Taffy Thomas MBE and The Yarnsmith of Norwich, alongside other acclaimed tellers including Brand herself. The skills of some of the leading storytellers from Japan, Africa and the Caribbean will also be on show, giving visitors the opportunity to experience tales from oral traditions that have developed in other parts of the world.

The idea of “storytelling” immediately conjures up memories of the nightly bedtime stories enjoyed by children for generations and, in a playful take on this idea, children under six years old, and their teddy bears, are invited to ‘Bedtime Tales’ to help them drift off to sleep. In contrast, the grown-ups can scare themselves into a sleepless night after listening to terrifying tales at the ‘Ghost Stories’ evening, which will take place in the atmospheric Falcon Manor Hotel, a former rectory on the outskirts of the village.

One of the defining characteristics of the storytelling experience, in contrast to its close relative, reading, is the element of interactivity; this year’s programme offers sociable storytelling walks, interactive workshops with Taffy Thomas MBE and a creative ‘artist book workshop’, during which a single piece of paper is transformed into a unique book, to keep the spirit of interaction alive. Spontaneous recreational raconteurs can also use the ‘Four Calling Birds’, an innovative series of playful bird-head sculptures by Shanaz Gulzar and Steve Manthrop, to interact with their audience.

In addition, Settle Stories is a charming addition to the summer arts festival scene, and makes an important contribution to local cultural life by attracting several hundred visitors from across the country to the quaint North Yorkshire village of Settle. The festival also engages admirably with the local educational scene, with an exhibition of ‘artist books’ produced by Settle Middle School, and a programme of storytelling workshops in local schools.

Besides open mike nights, during which amateur storytellers can take to the stage, Brand and her team have launched the search for Britain’s best amateur storyteller with this year’s Settle Storytelling Festival Competition. To enter, enthusiastic raconteurs can share video clips of their skills via Audioboo and, with a wealth of storytelling tips and video clips of inspiring tellers on Facebook and Twitter, the festival’s engagement with the internet brings a refreshing perspective to storytelling in the wake of the digital revolution. Grant Gordon’s Century, a piece of “multimedia music theatre” that tells the story of the Twentieth Century using a variety of different media, takes this concept one step further, showing how storytelling itself can thrive on an engagement with technology.

The poet laureate, Carol Ann Duffy, recently announced that “the poem is a form of texting”, and inspired the ensuing #tweetpoem Twitter trend, showing how traditional forms of artistic expression can be revitalised through an engagement with modern technology. Similarly, by using an innovative approach to the genre, Brand has updated the storytelling experience for a modern audience whilst staying true to the essentials of the art form. In essence, storytelling requires nothing more than a voice and an imaginative spirit, but by blending basic, traditional techniques with a creative relationship with technology, Settle Stories provides an important platform for contemporary storytellers and raises the profile of a tradition that is often overlooked.

Storytelling embraces elements of spontaneous theatrical performance, the oral tradition of our artistic heritage and a lively interaction between teller, tale and listener, and at Settle Stories, visitors of all ages can engage with the art of storytelling to bring their words alive. Thanks to Brand and her dedicated team of storytellers, Settle Stories is nowhere near its closing chapter and, as for the storytelling tradition, this is not The End…

Read on for an interview with the Settle Stories Festival Organiser Sita Brand.

Helen Craven learns more from storyteller and Festival Organiser, Sita Brand, about the storytelling tradition and the future of the genre:

What is your own experience of storytelling?

I started storytelling in the 1980s and have performed in schools, libraries, museums, art galleries, theatres and festivals! Some years ago I developed a storytelling show, “Memories of an Indian Childhood,” which I toured in England and also took to Singapore and Malaysia. In addition to more traditional storytelling, telling tales to adults, children and families, I’ve also used storytelling in corporate environments.

What are the origins of the storytelling tradition in Britain?

People have told stories from the beginning of time. Ever since we had language and were able to communicate human kind the world over has told stories. Britain is no different.

How do stories heard differ from stories read?

Stories that are told are often spontaneous, and there is something ephemeral about them. This is not the case with the written word, which though honed and crafted can feel constrained. When you tell a story rather than read it, you have the flexibility to improvise and respond to your audience, changing or adapting the story to the situation you find yourself in. There is something permanent about the printed word that makes it less flexible and, in performance, more constrained.

What makes a good storyteller?

A good storyteller is one who can weave magic for their audience by engaging them in such a way that they become completely absorbed by the story and transported to a different time and place. A good storyteller has a strong understanding of pace, vocal range and plot. Scheherazade was a great storyteller, that’s how she was able to save herself from being killed.

What is the appeal of storytelling for adults (both as storytellers and listeners)?

Everyone loves a good story, no matter what age you are. The great joy of performing to adults is watching them be completely transfixed and childlike as they become absorbed by the story. Isak Dinesen, author of Out of Africa once wrote, “All sorrows can be borne if you put them into a story or tell a story about them.” At its root, storytelling is about sharing experiences and adults need this as much, or perhaps even more, than children.

There are several international storytellers on the programme – what is the status of storytelling in other countries?

There is a revival of storytelling the world over. Storytelling is common to all communities and cultures. There are different versions of the same stories found all over the world. This is the case of stories from the oral tradition. The story of Cinderella can be found all over Europe, China, India, Africa, Vietnam and North America. The basic story remains the same, but there are cultural differences in each of the versions.

How is storytelling evolving and what is the future of the art form?

The way in which people communicate is constantly changing in the digital age. I think it’s important to respond to the times we are living in and allow storytelling to be presented both traditionally as well as in more experimental ways. Some people would argue that most forms of entertainment are storytelling, whether this be books, film, theatre, music or stand up. There are more and more digital storytelling projects. At the Settle Storytelling Festival we are keen to engage with new forms of storytelling but know our core focus is traditional storytelling.