‘Could easily blaze a trail of love through Durham’

DULOG’s production of Zanna, Don’t introduces us to the world of Heartsville High, a school where being gay is normal, being straight is disgusting and being leader of the Chess Club makes you a sex symbol. The show follows the titular Zanna (Joe McWilliam) as he uses his fairy magic to play matchmaker with the school’s lovesick students, until the football team’s quarterback and the captain of the Girls’ Intramural Mechanical Bull-Riding Team start to discover feelings for each other.

The cast and band delivered an incredibly fun and peppy performance, bringing the ridiculous nature of Heartsville High to life. Felicity Juckes’ and Lou Webster’s choreography was full of camp and innuendo, and the cast delivered a solid opening act. Sadly, over-the-top camp farce is demanding on a cast and, despite delivering a fun and enjoyable show, I felt that the production never quite blew me away. The gay military musical sequence at the end of the first act was easily the best part of the show, and if the production could harness and embrace more of that outrageous energy it could elevate it from a good musical to a deliriously dynamic one. The members of the production should trust their comic instincts more and fully commit to the farce: hopefully this can be put down to first-night nerves and technical issues.

The second act of the show was noticeably weaker, largely trading goofy fun for the sincere emotional turmoil of the central characters. Beautiful musical moments, like the magical quartet between Kate (Ellie Jones), Steve (Daniel Booth), Roberta (Amy Barrett) and Mike (Matt Jackson) were somewhat spoiled by the sudden and jarring appearance of emotional weight to the script, when previously we had been able to enjoy no-strings musical ridiculousness. The second act in many ways felt like a completely different show from the first, culminating in a ham-fisted and overly moralising finale. 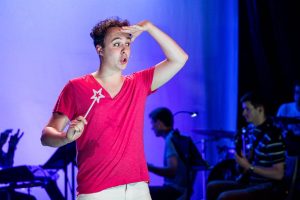 Standout performances of the night included McWilliam’s deliciously camp Zanna, hurtling around the stage with his sentient wand; and Barrett’s Roberta, who commanded the stage and delivered some excellent vocals. Special mentions should also go to Jones and Booth, who had the challenging task of switching abruptly from massively overplayed physical comedy to haunting emotional realisation during “Don’t Ask, Don’t Tell”, and truly rose to the occasion.

Other aspects of the show were a mixed bag. Lack of diction and voice projection from some cast members meant that entire words and phrases often got lost, especially during the faster, wordier songs. Notably, despite being immensely enjoyable to watch, I wish I had been able to hear the actual words of the insanely speedy trio by Rosie Weston, Charlie Keable and Rory McNeilage at the start of the second act. These issues were not helped by the persistent problems with microphones that plagued the whole show, leaving some soloists completely inaudible. The band also felt strangely quiet for large portions of the show, which is a shame because their playing (under the musical direction of Rhys Rodrigues and Becky Brookes) was near flawless. On the other hand, the lighting design by Alok Kumar and Jonny Browning was an unarguable triumph, complementing the action on stage with a selection of vivid and colourful backdrops.

Unfortunately there is a big gay elephant in the room that I feel needs to be talked about, namely the ending of the musical. After casting a spell that turns the whole school straight, Zanna is teased and ostracised by the Heartsville community. However, one heartfelt ballad later, the entire school u-turns and rallies around him, apologising for being so homophobic. I found this ending to be incredibly tasteless and superficial, completely trivialising the real prejudices that members of the queer community face across the world. In the wake of very real global LGBT+ human rights abuses in the last few years, I wish that more had been done to try to tackle these issues more seriously.

Serious socio-political concerns aside, Zanna, Don’t is a fun, silly show that is well worth checking out if you’re in the mood for a bit of a musical romp. If the production can iron out the first-night issues and push the farce that little bit more this could easily blaze a trail of love through Durham and DST as we approach the end of the university year.