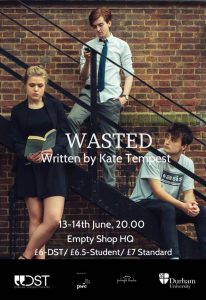 Fortnight Theatre’s production of Wasted by Kate Tempest follows three friends in their twenties on the anniversary of their best friend’s death. Rather than just being another play reiterating the problems of disillusionment with life, the structure of Wasted allows it to retain the audience’s interest throughout while exploring the themes of wasting life and being wasted on drugs and alcohol.

Throughout the performance it was the ensemble sections which really stood out. The simple nature of the set really allowed the actors to connect both with each other and the audience while the minimal tech prevented any untoward distractions from what was being said. In particular Danny (Danny Parker) seemed to really connect with the audience and delivered real meaning throughout while the moments where all three actors spoke in unison were particularly profound and felt rather moving although Charlotte (Olivia Bevan) seemed static both in terms of her eye contact and physical movement. This issue did not persist throughout, however, and during the main scenes of the play she connected well with both her character and the audience.

Nevertheless, the effectiveness of these ensemble scenes meant that some other parts of the play seemed rather flat in comparison. In particular, while the decision to have the actors adopting London accents could have done with more work as all the actors found themselves struggling to maintain them at various points. Ted (Owen Sparkes) in particular seemed to struggle to maintain his character when he wasn’t speaking which at points did detract from the actions of the other characters. Nonetheless, the cast as a whole should be commended for the tightness of their collective performance.

Despite these minor slips, however, Grebenkina’s direction definitely deserves praise. In particular her decision to frame the play by having the actors starting and finishing in the same positions accompanied by music added to the profoundness of the play’s message. Throughout the performance the combination of the obvious chemistry between the actors with the simplistic staging allowed Kate Tempest’s words to be the focus of the audience rather than any elaborate decoration or tech.

Overall, Grebenkina and her team should be very proud of putting on such a profound play. While not an easy watch, considering the nature of the piece, it’s definitely worth seeing and will give you food for thought both during and after the performance.