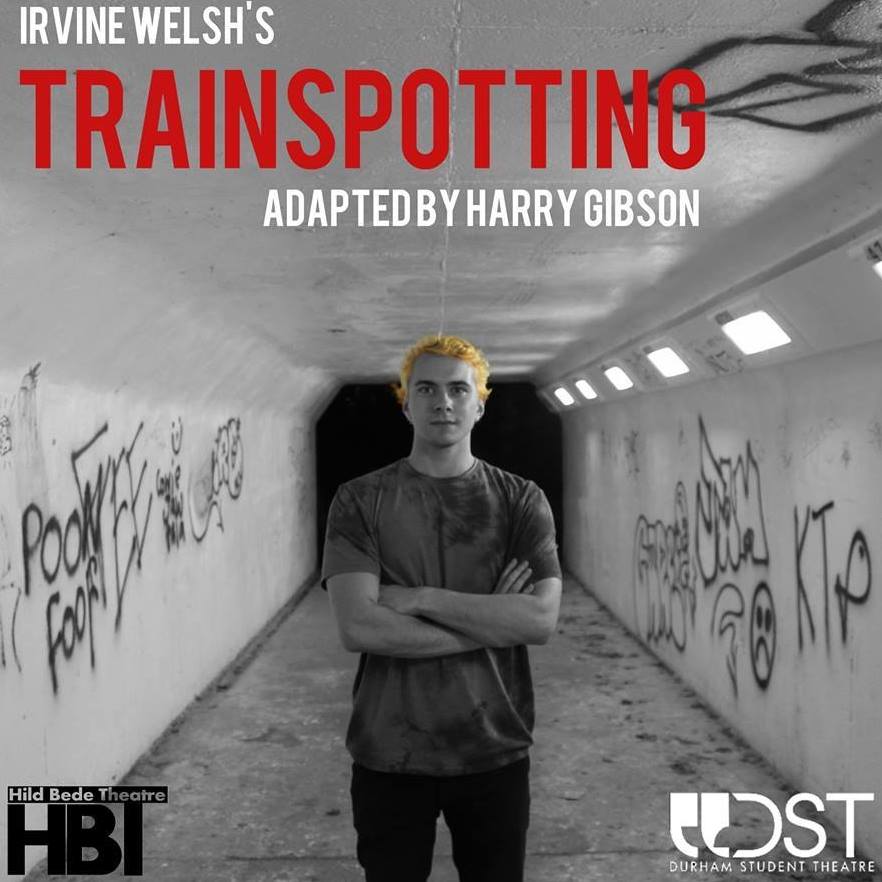 Staging an adaptation of Irvine Welsh’s Trainspotting is by no means an easy feat. The inevitable comparisons with the film version, combined with the harrowing subject matter must have seemed a daunting prospect. However, despite some minor issues, HBT should be commended for staging a thought-provoking and intense production that succeeded in unsettling the audience.

Trainspotting offers a snapshot into the seemingly hopeless lives of a group of heroin addicts. The intimate setting of the production was an inspired choice, creating an almost claustrophobic atmosphere which served in emphasizing the inescapability of the characters’ situations. The close proximity to the actors also meant that no gesture of pain or desperation went unmissed by the audience. Danielle Oliver should also be commended for creating a simple, yet highly effective set which succeeded in transporting the audience into a bleak and desolate world. Whilst these factors resulted in the audience being completely drawn into the world, I found the numerous black outs rather jarring; I felt unable to sit back and get completely lost in the story when it was so often interrupted. Though the use of music and train sound effects were effective during the scene changes, a reduction in black outs could have served in increasing the energy of the production as a whole, as I felt more of a frantic pace at times would have better echoed the characters’ lives. As the play itself is so short, I also believe that not having an interval would benefit the production as it would add to the feeling of inescapability.

Despite this, directors Charlie Hyde and Jessica Siddell should be proud of the overall effect created. Clever blocking meant that the actors utilised the small space to their advantage, and the frequent changes in location were always clear and effective. Simple, yet clever, moments such as the removal of a baseball cap to denote a character change, and the staging the of the couples’ fight in the pub, highlighted the strong direction and vision. The tone created by the directors made for some truly impacting moments, whereby the clear emphasis on the actors’ physicality drew out the tragedy of scenes such as the baby’s death and the discovery of Tommy’s fate. However, I felt as though more should have been made of the comedic elements of the play in order to ensure variation in tone and pace. For example, I believe more could have been made of the almost ridiculousness of the character of Begbie (Matt Lloyd), or perhaps actually staging some of the events recalled by the characters in their monologues.

Before watching the play, I was concerned about the accuracy of the accents, as the setting of Edinburgh is so crucial to the story. However, each actor impressively managed to sustain their convincing accents throughout. In fact, the standard of acting as a whole should be commended. Jake Lennon playing the protagonist Mark stole the show with this fantastic characterisation of a young heroin addict, with each of his gestures and facial expression seemingly well thought out. He had an impressive stage presence, which, combined with an honesty he brought to his monologues, made Mark a character the audience can’t help but root for. Jake Hathaway (Tommy/Sick Boy) was also particularly impressive. His natural charisma at the beginning of the play giving way to a heart-breaking dejection, resulted in his final scene being one of the most harrowing moments of the play.

Furthermore, Rosie Minnitt (Alison/Lizzie/Mrs Renton) provided some genuinely tragic and moving moments by her excellent physicality, and easily drew the audience’s sympathy. Yet, I would have liked to have seen more variance in both the delivery of her longer speeches, and in the characterisation of the three characters she played as I struggled to tell the difference between them. Matt Lloyd had moments where he stood out through his comic timing and general unhinged demeanour. However, I felt a more heightened version of Begbie was needed, as the character was by far the least engaging to the audience, and thus, for me, was the most forgettable.

As a whole, this production of Trainspotting was highly engaging and often moving. Though the majority of the story may feel inherently pessimistic, and it leaves one feeling rather unsettled, this is by no means a bad thing; it is thoroughly enjoyable seeing a production so thought provoking. Although it perhaps needed some variation in tone and pace, a great setting, some inspired direction and a cast of talented actors made for a production the audience are unlikely to forget any time soon.