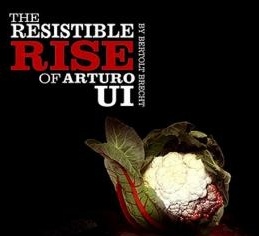 Entertaining as well as thought-provoking

Yesterday evening saw the first night of this year’s Freshers’ Play: the resistible rise of Arturo Ui, Berthold Brecht’s comic play depicting the rise of Hitler against the setting of the Chicago cauliflower industry. Intrigued? I certainly was. While it may read like something along the lines of ‘Bugsy Malone meets Schindler’s List’, the plot follows historical events almost exactly, albeit within a rather ridiculous context, all of which is intended to get the audience thinking about exactly how and why the events occurred.

As the curtain went up, I couldn’t help but think that it’s not often on the Durham drama scene that you get to see a performance of entirely fresh faces. The producer even mentioned in her note in the programme that the Freshers’ Play has a certain ‘awh it’s nice they tried’ reputation. Yet the quality of the production was really pleasantly surprising.

The comedic aspects of the play were certainly a highlight, while although some moments lacked the delivery needed to really pack a punch, a lot of the comedy was incredibly effective. In particular Ellie Bowness as Dockdaisy made a real impact, with several audience members on my row laughing well after she left the stage. Throughout the production, the audience was treated to horrific lip-syncing, show-puppet-esque dancing behind a screen and enough cauliflower throwing to last a lifetime, giving the production more than enough scope to be both entertaining as well as thought-provoking.

Yet the play’s main success has to be its breakout performances. Leonie Price’s performance as Ernesto Roma, the direct counterpart to Hitler’s lieutenant Ernst Rohm, was particularly powerful. Her command of the stage as well as depth of character did much to redeem many of the weaker performers in key scenes.

However, the true breakout performance in this production has to be George Rexstrew as Arturo Ui, the Hitler counterpart. Commendation has to be given to any actor who attempts a figure that carries so much social expectation. Yet Rexstrew’s performance was incredibly brave. I dreaded that Rexstrew’s Arturo would be either a rather distasteful caricature or an overly sympathetic, humanised portrayal. Instead he managed to avoid both, giving his character a real sense of gravitas and credibility that helped to carry the production’s message.

Nevertheless, the production was certainly not without its flaws. Many of the set changes, for example, were so unbearably slow that the action often started to drag. The lighting too often fell well short of the mark, leaving some actors speaking in relative darkness and others stood awkwardly in silence when the wrong spotlight came on.

Similarly, the use and quality of American accents varied so much that it heavily distracted form the action on-stage. Several cast members abandoned any attempt at an American accent, let alone one from Chicago, resulting in accents from all over Britain also being thrown into the mix and adding a rather unprofessional edge to the production. The performance was also certainly one of two halves, with the first act taking a long time to find its feet and many of the ensemble scenes severely lacking in the pace they needed to maintain the audience’s attention.

Hopefully, these factors can be put down to first night nerves, particularly as it was the first night in Durham for everyone involved. What is certain, however, is that this production is well worth seeing as it moves well beyond a night’s entertainment laughing at freshers. Instead, this year’s cohort of freshers really managed to bring Brecht’s piece of political satire to life, with a couple of stand-out performances that really gave the production the emotional impact that it needed.