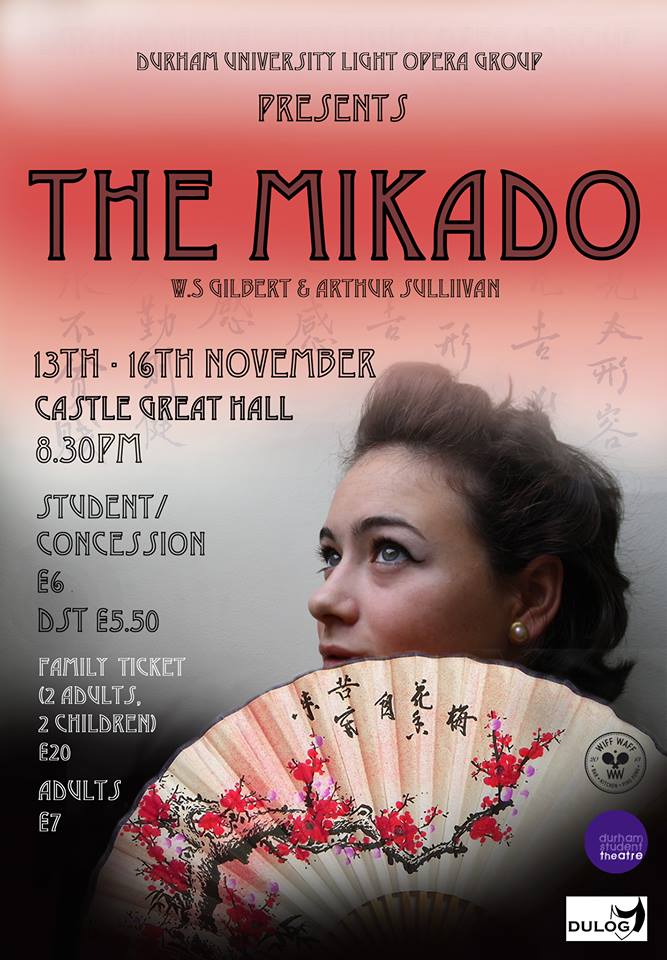 As a relative newcomer to opera, I had no idea what to expect from DULOG’s production of The Mikado. Indeed, other than a couple of pre-conceived notions loosely relating to Pavarotti (and Paul Potts from Britain’s Got Talent), my frame of reference was completely blank. This probably worked in my favour, as I turned up at Castle Great Hall with an open mind, willing to absorb a new genre and all it had to offer. At first, however, I had to overcome my childish impulse to giggle at some of the names in the production such as ‘Pooh-Bah’ (or Pooh Bear as I misheard it), ‘Pish-Tush’ and my personal favourite, ‘Titipu’.

Immaturity aside, my initial feeling, before the performance had even started, was concern at the advertisement promising ‘that familiar Gilbert and Sullivan humour’. To be honest, I was doubtful that comedy in this form would strike any kind of a chord with me, and after the opening musical routine I still remained unconvinced – the song snatched at humour without successfully pulling it off. The fact that some of the male chorus were seemingly uncomfortable dancing was perhaps the reason for this, or maybe it was just the song. As the performance got underway, however, the true humour began to shine through and it was nothing short of excellent.

Russell Park was superb as Koko and his song ‘I’ve got a list’ was the turning point from which the performance took off. The changing of the words into modern day satire was genius, and I literally laughed out loud from the early mention of ‘twerking’ until the very end of the number. Every comedic reference really hit the nail on the head and whoever wrote that section into the production deserves some serious credit. From this moment, I realised what the humour of the play was all about and managed to engage with it fully from there on in, as did the rest of the audience.

The comedy was excellently delivered, not only by Park, but also by Matt Elliot-Ripley and Hugh Train as Pooh-Bah and Pish-Tush respectively. The way that Elliot-Ripley managed to excruciatingly purse his lips for the entirety of the performance demonstrated a willingness to suffer for his art that was rewarded in him being genuinely hilarious at times. The same can be said for Train as Pish-Tush, whose part was smaller, yet still carried with it some slapstick comedy that left everyone in the audience laughing.

Turning to the production’s main characters of Yum Yum (not the pastry) and Nanki Poo, there was a fully convincing chemistry between them which added significantly to performance’s execution. Claire Ward’s outstanding voice was projected masterfully when she had the chance and her portrayal of naivety was yet another strong source of humour. Alex Prescott as Nanki-Poo was likewise engaging and energetic. Overall, they worked well together – particularly in the scene where they flirt dangerously; at risk of being caught by the Lord High Executioner.

This performance was hugely enjoyable, but was not without certain teething issues that, at best, could be put down to first night nerves. There was one instance where lines were forgotten and the actors had to be prompted by the director. On other occasions there were stutterings and stammerings which, at key points in the production, proved somewhat costly. Ultimately, though, this was a fine production with a clearly enthusiastic cast. Adam Hughes was imposing as the Mikado and Caitlin McEwan, Lucy Rowlanes and Bianca Watts were also entertaining and charismatic in their roles. Also, the chorus grew in confidence as the show settled into a rhythm and this had the effect of easing the audience deeper into the world of Titipu to the extent that production seemed to end very quickly, which is always a good sign.

Director Ellie Gauge should take pride in putting on a performance well worth seeing for its comedic value. A lot of the music was not for me, but that does not take anything away from the competency of the singers and the quality of the orchestra. My overall verdict is that The Mikado, as an opera, was okay, but as a comedy, was the probably the funniest production that I have seen in Durham for a long time.