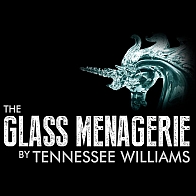 ‘warm humour and moving self sacrifice’

Tennessee Williams’ The Glass Menagerie is Thrust Stage’s latest production: a story of family dynamics in southern America pre-WW2. Williams primarily addresses the frustration, disappointment and disillusionment of his characters, although moments of warm humour and moving self-sacrifice soften the play and invoke an emotional investment from the audience.

With a cast size of four and an unchanging setting, The Glass Menagerie is a challenging piece of theatre that requires a good deal of creativity and innovation from actors and director alike: Matt Dann rose to the challenge with imaginative staging that made use of the stage wings and steps into the audience, although lighting was perhaps used too liberally for emphasising the symbolism of the absent father’s picture in a way that at times came across patronising.

The actors were impressively skilled and the entire production felt polished and well-rehearsed. The southern American accents were tackled with ease and did not waver throughout the play, although the strength of the southern twang lacked consistency from character to character: a minor issue from a talented cast that set its own high standard.

The play opens with Tom, played by Joe Skelton, addressing the audience directly. Skelton’s unhurried and relaxed demeanour immediately puts the audience at ease, and his agonised frustration is convincingly conveyed throughout the play. Skelton brings warmth and charm to the character with a gentle humour in otherwise tense and serious scenes.

Georgie Franklin’s Amanda was also exceptional. With an enormous amount of stage time and huge volume of lines, keeping Amanda interesting and engaging is no mean feat. Franklin’s intelligent understanding of her character and the subtext of each scene kept the play fresh: at moments it was her creative flair alone that carried the plot forward.

Franklin’s effervescence was beautifully juxtaposed by Hebe Beardsall’s fragility as the crippled and shy Laura. Beardsall’s sensitivity to her character gave Laura’s silence and stillness a strength of force to match the extroverted restlessness of the others. Beardsall approached each scene with an unwaveringly brittle self-confidence that endeared her to the audience and ensured a heart-rending finale.

Joining the cast in the second half of the play, Michael Forde brought with him an energy and likability as Jim O’Connell that successfully set up Laura, Amanda, and the audience for tragic disappointment. Forde’s skilful interpretation of Jim had such dynamism that his scenes were the most enjoyable of the play: a factor that made the final betrayal all the more powerful.

What made The Glass Menagerie stand out from other student productions I have seen is the way the cast interacted with each other. Perhaps a product of having such a small cast, the four actors were clearly trusted each other to know where each scene was going, and bounced off one another with ease. In particular the fight scene in the first Act between Tom and his mother was memorable for its gritty rawness, where shouting matches in other amateur productions often come across stilted and melodramatic.

All in all a superb adaption of Williams’ play, and a very promising start to the year for Thrust Stage.