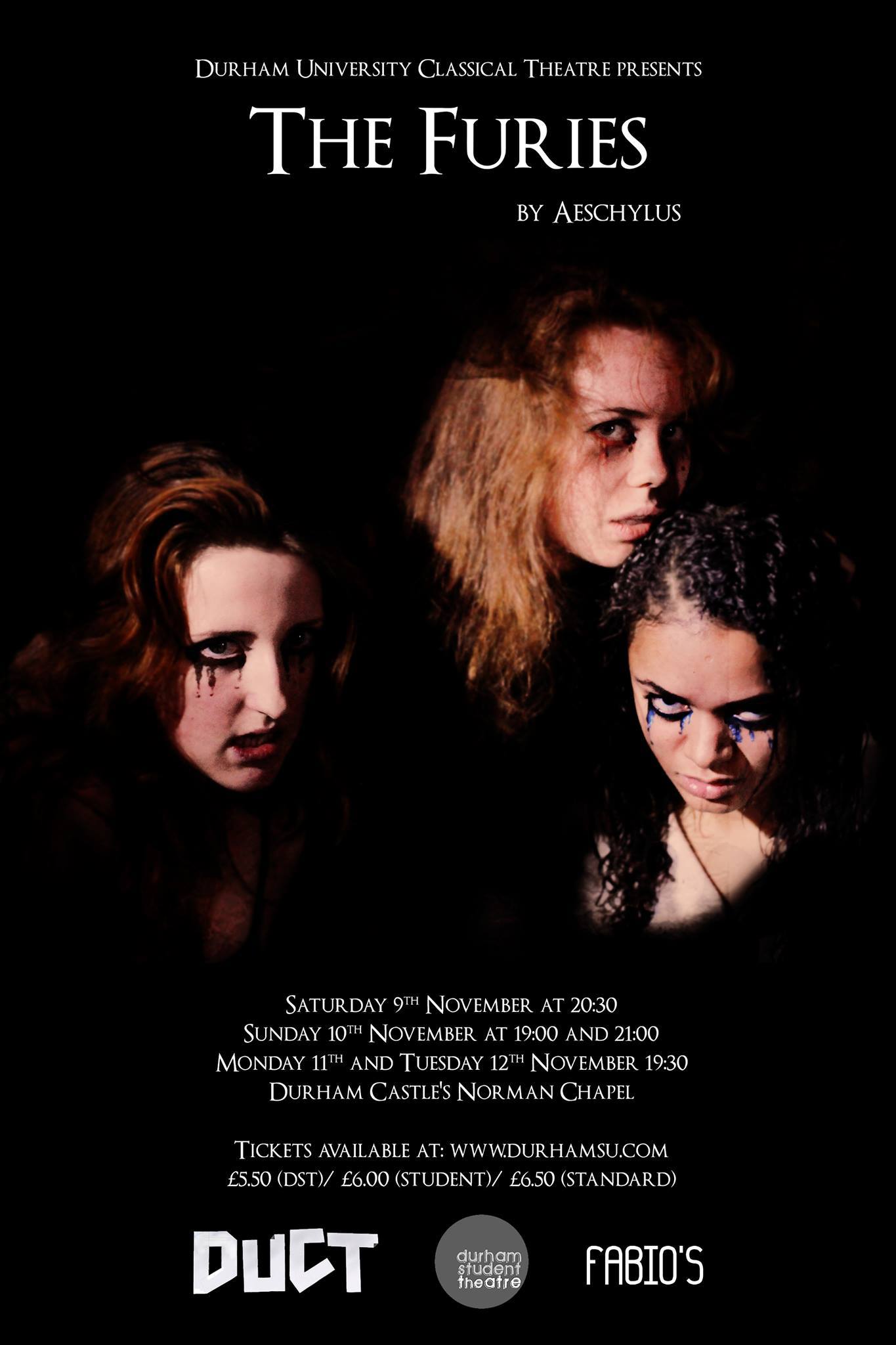 Daniel Zimmermannski described Aeschylus’ The Furies as ‘a somewhat unusual tragedy. No one dies, and it has a happy ending.’ Like Zimmermannski, ‘unusual’ is exactly the word I would use to describe DUCT’s latest production. Set in the Norman Chapel of the Castle and performed in the round with cast members doing the lighting, watching ‘The Furies’ is an intense experience for audience members.

‘The Furies’ is very much an ensemble piece, and as such cannot rely on any one actor to hold it up. Thus the success of the play depends more on imaginative direction than most productions. Skilfully directed by Leo Mylonadis, the pace undulated between lengthy monologues and frantic chorus chanting.

As a heavy Greek tragedy, acting in the round was a wise decision and the intimate performance kept the audience from losing focus during the complex and sometimes long-winded stories of different gods and goddesses that were dispersed throughout the play. While still heavy-going, the performance was by no means dull and Mylonadis successfully made use of the space he had and deserves credit for dexterously tackling such a difficult play. Unfortunately while I appreciated the creativity of the lighting (LED spotlights held and moved by the actors themselves), I found the lights to be distracting, leaving impressions on my retinas every time I blinked.

Use of Ben William’s compositions in the climactic scenes broke up the serious content with the entire cast singing haunting harmonies unaccompanied but for a talented violinist (Isaac Lusher). Combined with the outstanding choreography, the musical scenes were the most enjoyable and memorable of the play. The prosthetics were impressive and added a creepy edge to the haunted feel of a partially-lit Norman Chapel.

There were notable performances by Georgina Franklin, Philippa Mosley and Sian Green.

Although at first the intensity of the drama made watching the cast slightly uncomfortable at such a close proximity, Franklin and Mosley committed to their gargoyle-like Furies with a dedication that made the animal noises and teeth gnashing believable and did not distract from the play. Their writhing toed the line between insanity and sexiness, which hinted at their characters’ more glorious past. Green’s serene interpretation of Athena brought a much-needed juxtaposition to the raging chorus, and her clear delivery and stillness was refreshing.

It was a very physical production in which the multi-talented cast sung and acted in very close quarters with the audience. There was no holding back when it came to sustaining eye-contact with those watching the play, and this enhanced the intensity of the experience. In fact, my lasting impression of this production was that rather than a being nice night out at the theatre, I was subject to an intense theatrical experience which swept me up and absorbed me in the plot. This is by no means a bad thing: in fact is probably necessary in the case of Greek tragedy.

I was surprised and impressed by this brave production, which provided a welcome break from the more traditional performances DST has showcased so far this year.