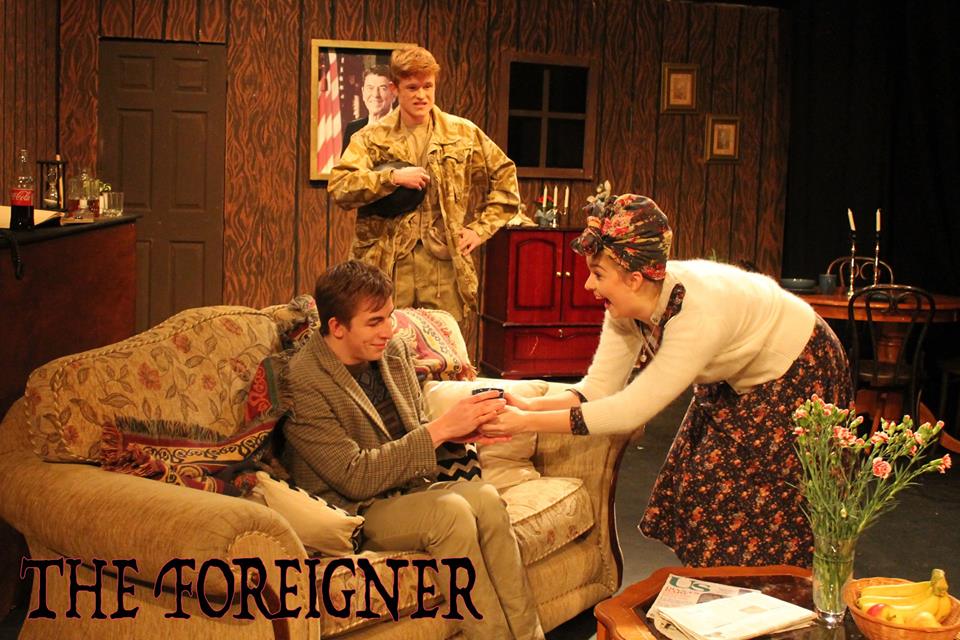 To walk into the theatre and to be greeted by a comfortable setting of a living-room creates the impression of a forthcoming light-hearted and cheerful play, and ‘The Foreigner’ to a certain extent, is that. Pervading its tone throughout though, amongst the comedy, is the sense of looming disaster as the audience comes to worry for the outcome of the characters as they become increasingly loveable throughout, in a plot which is frighteningly still relevant today.

The endearing nature of the characters though, is down to the actors who played them and the laughs grew throughout the show as they settled more comfortably into their roles. Although David Fairbairn was the one to immediately command the audience’s attention in a confident stage presence, Dan Hodgkinson grew to excel within the physical comedy of his role, and really started to shine within the second act as his character “grew a personality” and was allowed to be more exuberant. Isobel Clarke’s Catherine was another character who developed throughout the show, transgressing from stereotypical wife to emotionally nuanced in her failing marriage to the scheming Reverend David. Max Lindon’s performance here was sinister in his normality, the undercurrent of his motives apparent to the audience throughout the play and what was lightly comedic at the beginning quickly uncovered his extremist purpose, whilst Uday Duggal’s Owen was similarly scary in a more outright fashion. Whilst the characters grew to be individuals who continued to surprise the audience, Zoe Lawton’s Betty Meeks and Marcus Dell’s Ellard were those who excelled in their stereotypes of naïve pensioner and the Southern-drawling simpleton, of whom the audience grows to sympathise with, with Meek’s character being a particular source of hilarity.

The first half of the play is far more light-hearted than the second act. Partially because the subject-matter of prejudice is far clearer by this point, but the humour is still in play. What is interesting here is the question of whether we should introduce comedy into a situation where issues as serious as racism and xenophobia are addressed. Does it make addressing them more accessible to the audience and therefore have a more meaningful impact, or should it be treated with much more gravity? At one point a KKK member utilized physical comedy, prompting the audience to laugh, and should they have been a source of amusement to an audience member, using their body to create amusement in the same way Charlie would have? Mostly though, the play did separate the humorous and the serious moments effectively, switching quickly between the two, but it largely never felt they were trying to make light of the situation, this being commendably due to the actors who were able to shift through the emotions so quickly.

The allowance of the comedic into the more serious was incredibly effective however, almost every moment, even the comedic ones acted as some form of character development. Whereas some moments could have been given way to pointless laughs, they served to show Charlie’s development into his new life or Catherine’s gradual realization that her marriage was slowly deteriorating. It demonstrates the skill of directors Talor Hansen and Anna Haines to keep the plot moving along so swiftly in its purposeful manner.

Although it felt slightly stilted at its starting point it can easily be placed down to first night nerves. The play soon gathered rhythm into its comedic plot, and smoothly transitioned into its stand against fascism, which is still so relevant today.

‘The Foreigner’ is on at 19:30, Friday 1st December- Saturday 2nd December, at The Assembly Rooms Theatre.